If you have been following The SSD Review in 2013, you are probably familiar with our coverage of 12Gbps SAS.  Throughout the year we have covered HBAs, RAID Adapters, Enclosures and SSDs.  We have been incredibly busy reviewing new products, but one product in particular has stood out.  In all of our 12Gbps SAS reviews we have sung the praises of the HGST SSD800MM.  Since the SSD800MM was more of a means to an end when reviewing the LSI SAS 9300-8e, we never really gave it its proper due.  With this update, we wanted to put this SSD into perspective after nearly a year’s worth of 12Gbps SAS testing.

After all, thanks to the good will of HGST, we have been able to publish complete reports of, not only the HGST SSD 800MM Enterprise SSD itself, but also the LSI SAS 9300-8e HBA, Adaptec (By PMC) ASR885 RAID Adapter, and most recently, the Serial Cables Direct Attached JBOD.  The highlight of each of these reviews is that they were all conducted with, not one but, eight HGST SSD800MM SAS 12Gbps Enterprise SSDs and this is something you may never see repeated elsewhere! 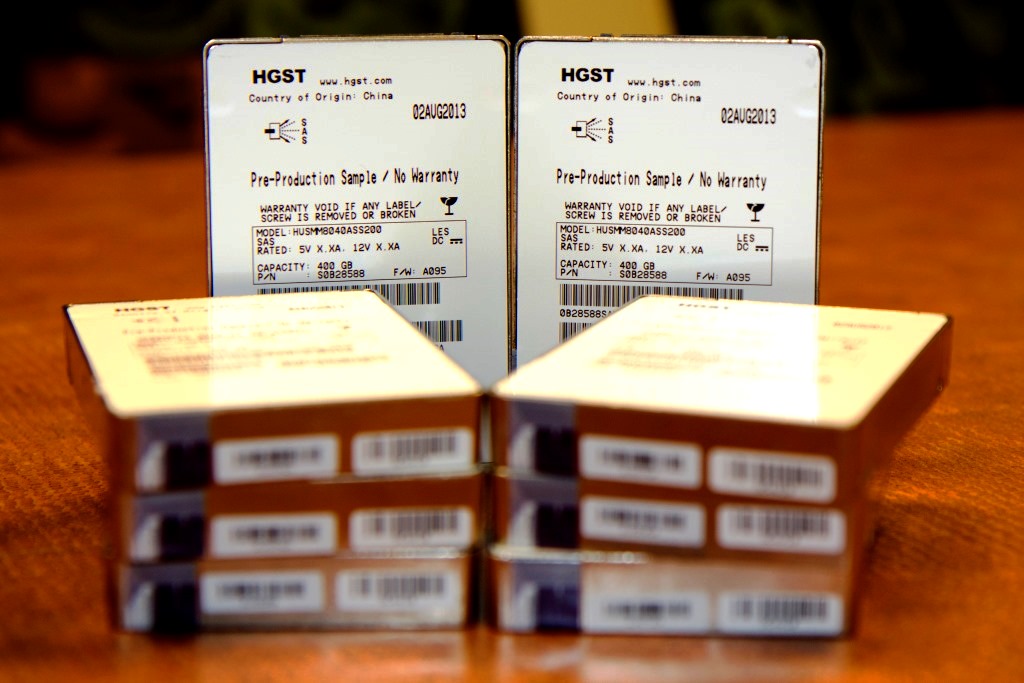 We weren’t exactly sure what we were getting when the SSD800MM shared a review with the LSI SAS 9300-8e.  Being one of the first 12Gbps SAS SSDs to market had a lot of benefits, but some drawbacks.  We knew that the performance was outstanding, but without competition, we couldn’t tell if we were in awe of 12Gbps SAS interface or the HGST SSD800MM itself.  After spending nearly 6 months with this SSD, we can conclusively say it is the HGST SSD800MM that stood out.

There isn’t a single specification on that list that isn’t outstanding.  Sequential performance is rated at a blistering 700MB/s and 1150MB/s for reads and writes.  Random 4K read and write IOPS of 145K and 70K, respectively, is just mind numbing.  Remember, these are steady-state numbers, not brief bursts.  We knew, as soon as we saw the specifications, that this drive had the potential for greatness.

Looking inside the SSD800MM would lead you to believe you ordered an Intel SSD.  Nearly every component in the drive is branded as Intel.  This joint venture has been going on for many years and is probably one of the main reasons why you have never seen an Intel SAS SSD.

The controller is a joint venture between Intel and HGST and has 12 channels.  Next to the controller are two DDR3 DRAM packages from Micron that total 1GB.

Each side of the board has 9 enterprise 25nm MLC NAND packages, for a total of 18.  Each package contains 32GB of NAND for a total of 576GB in our 400GB version.  Large amounts of over-provisioning is common on enterprise SSDs, but at 44%, HGST is on the high side.

Finally, instead of a large bank of surface-mount capacitors, HGST followed Intel’s S3500/S3700 lead with a single through-hole capacitor.