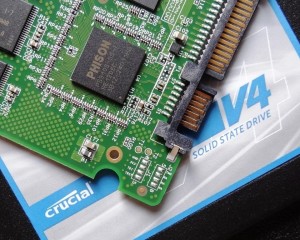 A few weeks back, Crucial sent us one of their new V4 SSDs to check out and, much to our surprise, we discover that it is an SSD based on a Phison controller and it is SATA 2.

To new SSD users, this may not seem like much but we were a bit surprised as Crucial/Micron and Marvell seem to fit like ice cream and apple pie. In fact, I can’t think of Crucial/Micron using anything but the Marvell controller previous to this.

With SSD technology still advancing at such a quick rate, we had to also ask how Crucial/Micron, the company primarily responsible for pushing SSD prices down drastically in recent months, was going to pull off a SATA 2 SSD marketing pitch and match prices of their own far superior SATA 3 line.  After all, the M4 is already billed as one of the top dogs on the block for both performance and reliability.

I then realized that, as much as we keep pushing the bar on SSD advance, over 90% of computer owners could still not realize the performance of a SATA 3 SSD.  More importantly, the typical user would never observe any visible difference between the Crucial V4 we are reviewing today and the best SSD on the market.  The reasoning for that is because the main visible performance upgrade of the SSD is seen in quicker start times and faster OS and software starting, this being accomplished by disk access speed alone which is virtually identical for all SSDs.

The Crucial V4 is available in capacities of 32, 64, 128 and 256GB and available now with pricing at Amazon

The exterior case is of a black aluminum with four screws on the sides securing the top casing to base plate. Once open, removal of four more screws allows separation of the PCB from the base plate.

On the front of the PCB is the Phison PS3105-S5 controller, Micron DRAM cache as well as four modules of Micron 25nm synchronous MLC NAND flash memory, each being 32GB in capacity.  There are also four modules on the back of the PCB as seen here:

Total capacity of all memory modules (32GB x 8) is 256GB, however, formatting leaves an end user capacity of 238GB.