Comay is a brand of SSDs manufactured by CoreRise Electronics Ltd, one of three SSD companies located in China with the others being Renice and Runcore. The Comay line is a typical ‘SandForce Driven’ family with limited availability as the company is relatively new, however, Comay can be found in Canada, at Synetic Inc.  Their website shows additional distributors in Russia and Australia.

Initial release of this review identified it as the Pro 3 version and it has since been amended as the Venus 3.  It is a bit like the traditional ‘lucky nickel’ in that the specifications of the SSD match that of the Venus 3 although, as can be clearly seen in this article, the exterior packaging, SSD identification and even internal labeling listed it as the Venus Pro 3. It was mislabeled and is now a collectable!

Core Rise has since contacted us, apologized for the mistake, and I might guess that the Pro 3 will be reviewed shortly as well as other Comay/Core Rise releases including a mSATA SSD.

The Comay Venus 3 is available in capacities of 40, 60, 90, 120, 180, 240, 360 and 480GB and contains overload protection where, should a power spike or surge occur, the SSD will immediately disconnect to prevent damage to the SSD and data loss. The Comay Venus 3 performance is listed at 555MB/s read and 525MB/s write with 85,000 IOPS at 4k aligned random write disk transfer and there is a three year limited warranty. 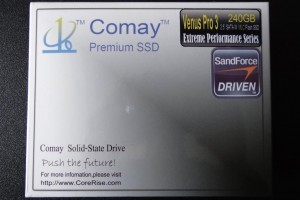 Included in the package is a User Guide which explains the SSDs features and has installation instructions, the SSD, as well as a data cable for connecting to the computer.

The SSD components are encased within a very sturdy silver brushed metal case that is held together by four screws, one of which is covered by a security patch that would void the warranty, if removed.

The printed circuit board (PCB) is green in color and contains the SandForce SF-2281 SATA 3 processor and 16 modules of Intel 25nm synchronous NAND flash memory (29F16B08CCME3), eight on each side of the board.

Each module is 16GB in size for a total of 256GB RAW capacity, however, LSI SandForce over provisioning  and firmware retain a full module for their needs, reducing the SSD to its advertised 240GB capacity. Formatting reduces it even further still, leaving us with 224GB of available user storage.