It was only a few weeks ago that ASRock announced their newest Ultra Quad M.2 Card, yet today we have it in hand and tested.  The ASRock Ultra Quad M.2 Card bears a striking resemblance to the HighPoint SSD7101 RAID Controller we tested a few months back… but there are some very distinct differences that we will point out in this report.  Both cards rely on four NVMe SSDs which can be set into RAID mode through VROC (only way to boot), or your system OS softRAID to provide incredibly fast throughput and IOPS. 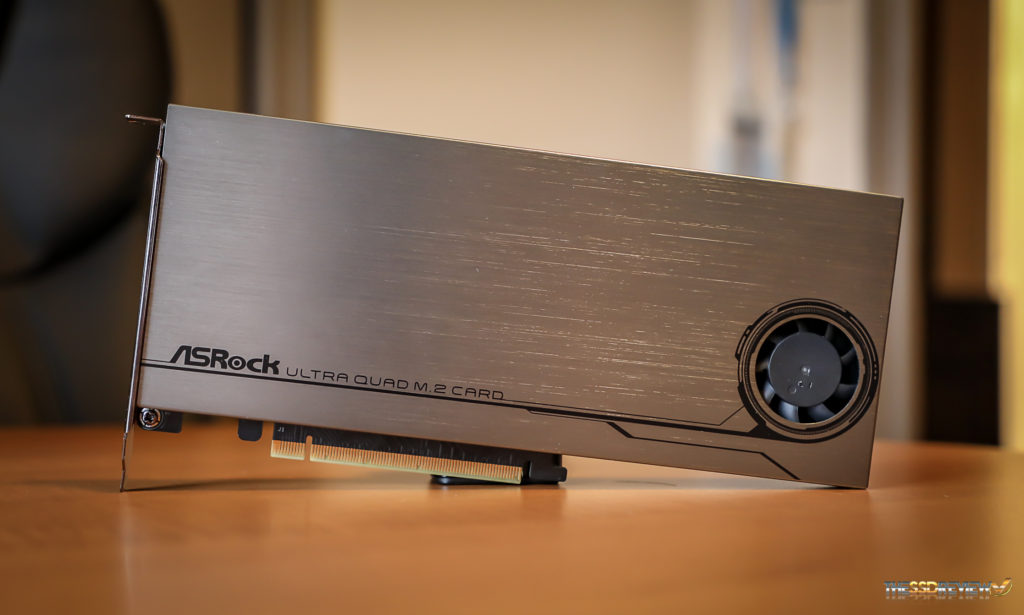 We don’t know quite when the Quad Ultra will be released, however, we might expect news some time this quarter as it is on their site, and we have learned the Ultra Quad Card might go for somewhere around $79.  We should add that this IS NOT a solution for all scenarios as this card is only compatible with higher end motherboards that support PCIe bifurcation, where the PCIe 3.0 X16 interface can be split to accommodate each of the  4 SSDs in their own 4 lane sector (X4X4X4X4 vice X16).  In our test case, the ASRock Fatal1ty X299 motherboard worked flawlessly and any ASRock X299/X399 ASRock motherboard should work.  This is a significant difference from the HighPoint SSD7101 which contained a PLX PEX 8747 48-lane, 5-port, PCIe Gen 3 host switch which controlled all movement to and from the device.

The ASRock Ultra Quad M.2 Card is a PCIe Gen 3 x 16 M.2 AIC (add-in card) that will hold up to four NVMe M.2 SSDs for RAID via Intel VROC, or through pass-through to the OS where the four drives can be formatted as logical drives individually, or set into a softRAID as we have done here.  The Ultra Quad can accommodate ‘M’ key M.2 PCIe Gen 3 x 4 SSDs of 2242/2260/2280 and 2210 sizes.  ASRock accomplished this by angling placement of the SSDs which also reduces the distance from SSD to CPU.

The exterior casing is aluminum and doubles as a heatsink and, for our testing today, we chose to run with four Samsung 960 Pro NVMe SSDs.  In this photo above, we can understand how the SSDs are seated against the thermal padding which dissipates the heat to the outside of the device.  There is also a 50mm fan and switch just above it to its left which allows the fan to run at full or half speed.  The speed of the fan can also be controlled by the ASRock Ultra Quad Utility software.  Next up, ASRock has included a 12v power port which connects perfectly to your unused second PCIe dual 6-pin connector.  This accommodates for any additional power needed through the SSDs or fan.

On the bottom right of the card is a set of four dip switches that enable or disable the Utility, and provide configuration for up to three additional Ultra Quad Cards.  This makes it entirely possible to RAID up to 16 NVMe SSDs.  There are four LEDs that flash when there is SSD activity at the metal bracket side of the device and, included with the Ultra Quad M.2 Card, is a Quick Start Guide and DVD with the ASRock Ultra Quad M.2 Card Utility.  As we can see here, it most likely works solely when VROC is in play: