It has been a bit since we posted a review on a 2.5″ notebook SATA3 SSD and that comes with the territory I guess.  We get caught up with the latest and greatest, and we are always amazed that M.2 SSDs the size of a stick of gum can reach mind blowing speeds of NVMe at 3.5GB/s.  Nevertheless, SATA3 SSDs still have a stronghold on the industry with respect to the upgrade from a hard drive and the performance increase we see from this step up is significant. 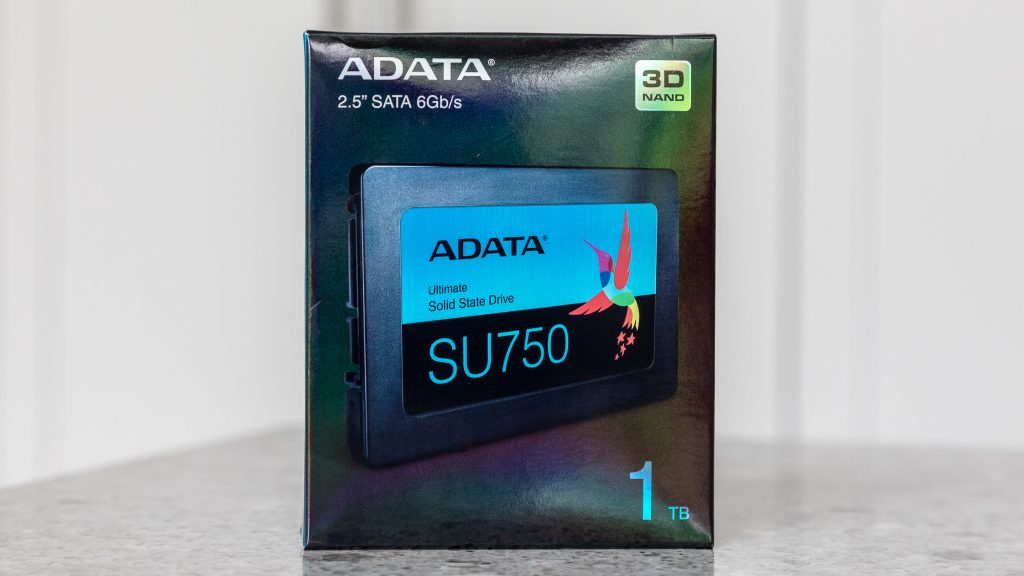 We have on our Test Bench today the ADATA Ultimate SU750 2.5″ SATA3 SSD in the 1TB capacity and this is a typical example of a very speedy upgrade to ones hard drive.  It has very noticeable speed in comparison to a HDD and, for the most part, a capacity point that most will never fill.  This SSD is available in 256GB. 512GB and 1TB, has SATA 3 speeds of 550MB/s read and 520MB/s write, and comes with a 3-year limited warranty which is immediately voided if you get the urge to take that SSD apart, much the same as we do in this report.

The exterior of the SSD is of a two piece plastic top and metal base construction, is of a 2.5″ width notebook form factor, 7mm thick and has a shock resistance of 1500G. This  SSD also comes with complimentary downloads of Acronis True Image HD for your HDD to SSD disk migration, as well as the ADATA SSD Toolbox, both of which can be downloaded here.

I mention the shock resistance because, anyone who has ever dropped a system with a hard drive, understands how easy it is to damage that drive and lose everything. Unlike the hard drive which has an arm that moves to pick up data, there are no moving parts on an SSD to bounce around in the case of a drop, ensuring much better security for data on the SSD.  Other benefits include complete silence, less heat, faster system response, and the SSD is much lighter than a hard drive.

This is what you find inside the SU750 outer shell when opened.  This PCB is a little less than half the size of the SSD which demonstrates that we could easily throw together 2 and 4 TB SSDs in this same package.

This is a DRAM-less SSD and contains a Realtek RTS5733DMQ controller with four pieces of ADATA branded 3D TLC NAND flash memory.  Much of the reason we are seeing this DRAM-less design as of late has to do with the latest TLC memory which contains SLC caching within each chip.

Each NAND module has a RAW value of 256GB for a 1TB advertised capacity, however, the available consumer space once formatted is actually only 954GB.  The reason for this has to do with firmware requirements and the format and it ensures SSD endurance and performance over the long run.