Finally we wanted to see how performance was in a real world use when transferring large files. As we know, this SSD utilizes an SLC caching to help improve performance, especially writes. This is needed due to the inherent slowness of TLC NAND. For this test we are going to simply transfer over a 30GB folder of movies off of one SSD to this one and time how long it takes. Once complete we can calculate the average speed. 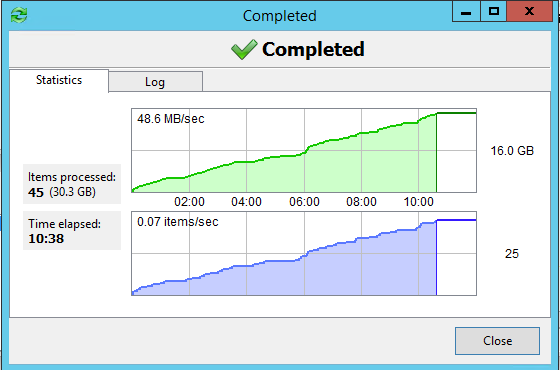 Sure enough, after ten and a half minutes and multiple pauses where the drive write speed dropped down to null, it transferred 30GB of large movie files at an average speed of about 48MB/s. This is quite unimpressive.

Next we turned to HDTune to show us the approximate size of the SLC cache space on this drive. 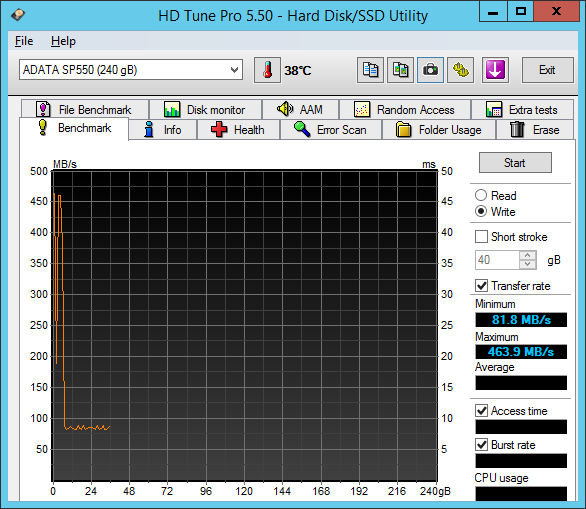 From the screenshot above we can see that it isn’t that much space at all, maybe about 6-8GB at best which is similar to other drives that have SLC caching. The speed after the cache is also low, reaching about 80MB/s average here. Therefore, based upon these results, we wouldn’t recommended using this drive if you are one to do multi-GB transfers too often.

The Premier SP550 is Adata’s latest release of a value class SSD. It utilizes a Silicon Motion SM2256 controller and SK Hynix TLC NAND. During out review we seen some very good synthetic performance with read and write speeds reaching 560MB/s and 512MB/s respectively. During PCMark Vantage it achieved a very good score of over 93K points and was decent in our PCMark 8 trials. Once we turned to testing out a real world file transfer, however, we saw how continuous writing can bring the Premier SP550 to its knees. Sequential writes averaged about 50MB/s, which is quite unimpressive, especially when the TLC based Samsung 850 EVO is able to maintain so much better performance with its secret sauce. 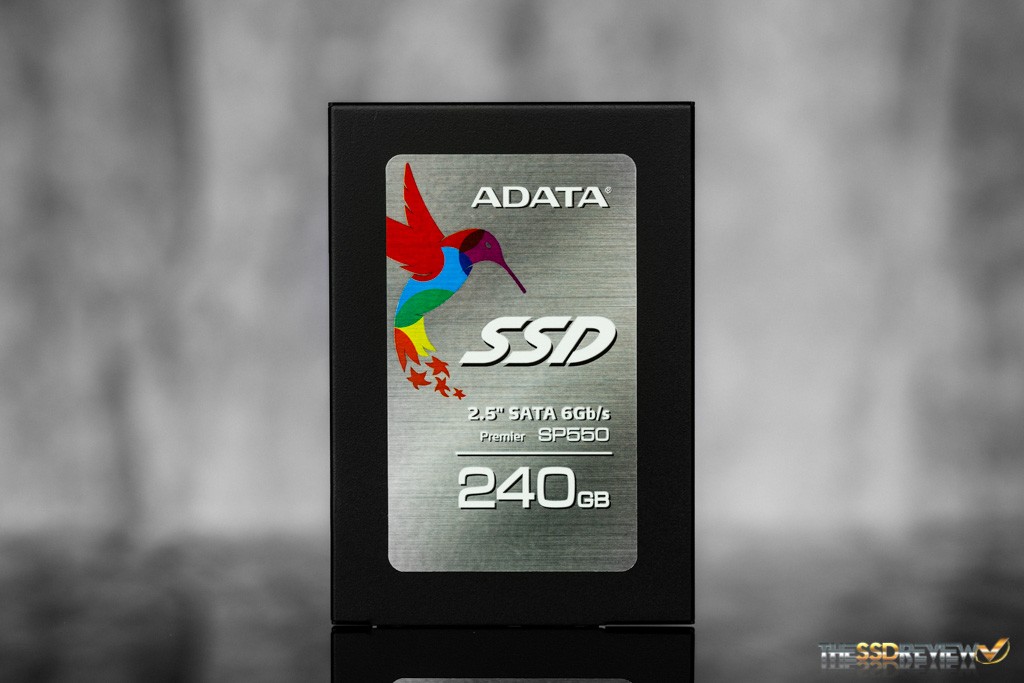 Because of its build and overall performance, it inherently cannot come at a price premium compared to its competition, thus market prices need to be as low as possible to keep it competitive. Right now, at prices that roughly match the OCZ Trion 100, it’s direct competitor, it is the better of the two. When looking at the overall market, however, it is not all that that easy to stand out given the competition. The Samsung 850 EVO and Crucial BX100 both boast much better performance at every capacity and usually their prices are very competitive. Considering the very poor continuous write performance we would have to suggest that the average consumer should save up a few more dollars, maybe skip lunch or that large coffee for a day, and get something better than this SSD. If you are in the market for something very cheap for maybe a HDD replacement for grandma or for an old system in which you are trying to save every dollar you can, this drive may still be a viable option though. Its read speeds are great and it did very well in PCMark’s tests. If you think this SSD fits the bill for you…

Check out the Premier SP550 on Amazon Today!

The SP550 is Adata's latest contender in the entry level market. While read performance is very good, write performance suffers with multi-GB transfers, but it is priced fairly cheap to make up for it. So, if you are looking for a cheap SSD to speed up an old system, this one could possibly be the one to get.