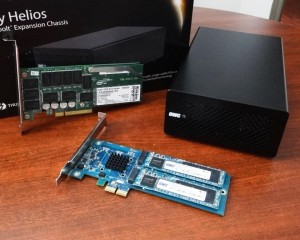 Our report today is going to take a look at the OWC Mercury Helios PCIe Thunderbolt Expansion Chassis and we guarantee that is unlike any you will ever see. In fact, we don’t know of many others who could even pull this off!

To start things off, lets make it abundantly clear that the OWC Mercury Helios is not ‘yet’ supported for PC use, but rather, intended for those ‘Mac and Cheese’ nuts.  In all fairness though, we pulled off two rounds of amazing testing with the Helios in a PC environment, one with the supplied OWC Mercury Accelsior PCIe SSD and then simply because we had the urge, we got this baby up and running with one of the top enterprise SSDs on the planet.  If you are in for a bit of reading, we have previously reviewed both the OWC Mercury Accelsior and Intel 910 and you are welcome to check both articles out.

The OWC Mercury Helios is is a Thunderbolt expansion chassis that takes advantage of the latest and greatest Thunderbolt technology. It allows the use of any half-length PCIe 2.0 SSD to provide a significant boost to your work in any number of different environmental configurations as shown in their compatibility chart.  For our purposes today ti will be SSD storage and performance testing.

Although Thunderbolt popularity right now seems to be complementing the Apple environment, transfer speeds simply couldn’t be ignored and the perfect example is through use of our Test Bench today, the Thunderbolt equipped Asus P8Z77-V Premium motherboard. The Helios is capable of up to 10Gb/s data transfer, uncompressed HD video capture as well as 10 Gigabit ethernet connectivity, contains a variable speed fan for cooling and the Helios powers on and off with your system.

The only visible components at all, in fact, are found on the back of the unit and consist of a 12v power outlet and two Thunderbolt ports. Jumping ahead just a bit, we were surprised to learn during testing that, unlike a simple SATA cable, a single Thunderbolt cable could provide access to several separate volumes simultaneously.  This was discovered when we initially powered up the Helios with the Intel 910 installed and four 186GB drives appeared. Reading up a bit on Thunderbolt, a single port could daisy chain up to seven Thunderbolt devices, two of which could be DisplayPorts.