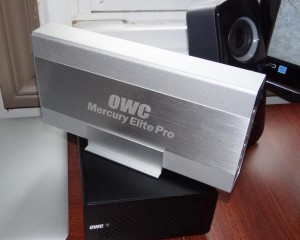 Every now and then its nice to break away from the SSD world just a bit and take a look at traditional storage innovations.  With that, I called up our friends at OWC and asked them to send me their Mercury Elite Pro Storage Solution for a quick look.

After all, I thought it might be nice to see what what kind of performance we could get from this device as it has a multi-port interface, these being USB 2.0/3.0, eSata and dual Firewire 800 ports.

The thing that first got my attention with the Elite Pro was the fact that there were so many configurations available to the consumer.  First off, there are three variations which are: 1. – USB 2.0 and Firewire, 2. – USB 2.0, eSATA, Firewire 400/800 and 3. – USB 3.0, eSATA and dual Firewire 800. We received the latter of the three and learned that there was also an opening for the Kensington Lock System.

In addition, the external case is available as a standalone for your storage hardware, or with a hard drive included ranging from 500MB to 4TB.  Ours came with the Seagate Barracuda 2TB already installed and ready to go.  There are two screws on the bottom of the unit that, once removed, allow the inside components to slide out of the exterior casing, one which is covered with a small patch of security tape if you buy the unit with storage pre-configured.

So…naturally the next step was to see whether I could configure this myself with an SSD present, rather than the hard drive.  After all, the external adapter alone can be had for as little as $39, if this worked.  With that, we quickly replaced the Barracuda hard drive with the PNY Prevail Elite Ultimate Endurance 240GB SSD that we recently reviewed and awarded our Editor’s Choice Award.