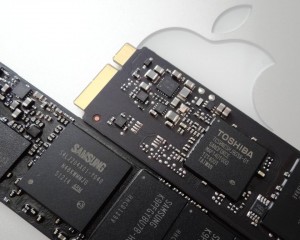 Following up on our first MacBook Air Review a few days back, we couldn’t resist getting a second MBA in our hands to pair off both the Samsung and Toshiba SSDs in a head to head battle of speed and performance.

The Toshiba SSD is LSI SandForce controlled and should excel in typical user performance , whereas, we would expect to see the Samsung pulling ahead with respect to it’s transfer of incompressible data such as movies, music and photos.

Early indications at Anandtech, however, seem to have shown listed specifications below norm for the typical ‘LSI SandForce Driven’ solid state drive.  Transfer speeds of 490MB/s and 340MB/s seemed to be lower than anything we had seen with the LSI SandForce SF-2281 6Gbps processor yet.  As I had stated in our first report though, I am new to the world of Mac/OS X and storage testing just isn’t the same in the Mac realm so nothing would surprise me.

Couple that with rumors that OS X and SandForce were like oil and water when it came to getting TRIM to work and, even with SandForce’ great garbage collection ability, I never expected to find a ‘LSI SandForce Driven’ SSD in an Apple. Nobody had a clue.

As it appears now, many are reporting that capacities of 64 and 128GB seem to be Toshiba SSDs with 256 and 512 capacities belonging to Samsung.  Identification can only be confirmed after purchase by following ‘Apple Icon/About This Mac/More Info/System Report and clicking on Serial-ATA‘. The SSD will be labeled as APPLE SSD ‘SM’ for Samsung or ‘TS’ for Toshiba.

The Toshiba THNSNS128GMFP is a ‘gumstick’ style SSD and it’s SATA connector is proprietary to Apple and, more specifically, proprietary to only new Apple systems released mid-2012.  Apple has made sure that, not only can we not switch off the SSD with a third party SSD but also, we can’t even switch off the SSD with 2010 Mac release product SSDs. Clicking on any photo will bring up a higher resolution photograph.

The Toshiba branded controller bears the markings of SandForce which would logically make it a SF-2281 6Gbps controller capable of performance in excess of 500MB/s read and write.  This MBA is a 128GB version and the SSD contains four modules of 32GB Toshiba Toggle Mode 24nm NAND flash memory for a total RAW capacity of 128GB.

Typically, 8GB of that memory would be proprietary to SandForce over provisioning and firmware needs which would leave the advertised capacities of 120G.

The configurations of both MBA’s differed with respect to our test protocol.  The system used in the first review was an Intel Core i7 Ivy Bridge processor with 8GB RAM and a 256GB Samsung SSD while the system in use for this review is an Intel Core i5 Ivy Bridge processor, 4GB RAM and the 128GB Toshiba SSD.  While the CPU and RAM will not affect storage performance at all, the performance advantage should go to the Samsung PM830 256GB SSD as its higher capacity followed with increased performance specifications, compared to the Toshiba 128GB SSD.

This was a necessary evil, however, as we have already related our belief that 64 and 128GB capacities of the MBA seem to be Toshiba while 256 and 512 capacities seem to be Samsung SSDs.  There is no identification on the outside of the sealed packaging and absolutely no way to confirm prior to purchase and actually seeing the identification for oneself.

The software we will be using for today’s analysis is typical of many of our reviews and consist of ATTO Disk Benchmark, Crystal DiskMark, AS SSD, Anvil Storage Utilities, and PCMark Vantage.  We rely on these as they each have a way of supporting one another yet, at the same time, adding a new performance benchmark to the total picture.  Much of the software is free and can be downloaded simply by clicking on the linked title.