We are always looking for a motherboard that has it all…the complete package.  Traditionally, you could get ThunderBolt 3 or you could get USB 3.2 Gen 2; it was one or the other.  There are never enough lanes and why they include so many SATA ports as well as the long extinct PS2 port is totally beyond me.  USB ports… Why the heck are there multiple speed USB ports rather than simply including the latest and greatest.  Anyway… This new ASUS ROG Maximus Z790 Hero Gen 5 motherboard changes most of that with some great features! 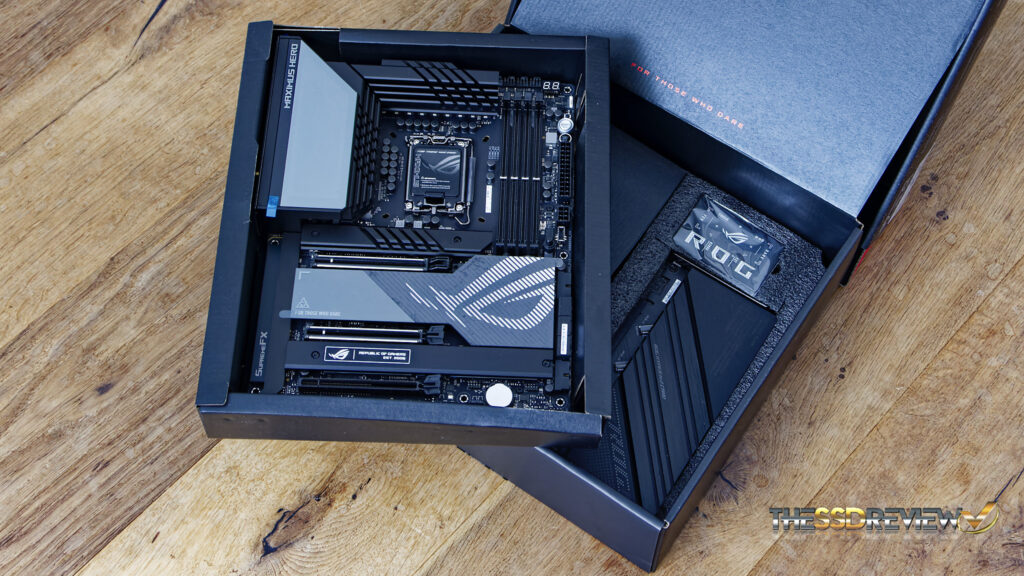 This AIC is manufactured of thick metal for effective heat dissipation as it contains the PCIe 5.0 x4 (4-lane) M.2 slot, along with another Gen 4 slot as well.

This board supports up to DDR5 7800+, has 20 Power Stages,  supports NVIDIA 2-way SLI and AMD Crossfire technology, and uses a SupremeFX ALC404082 HD audio codec with an ESS Sabre9218 Quad DAC. There are six SATA 3 connectors and we can see the metal header for the chassis contained USB 3.2 Gen 2 20Gbps port along with the two USB 3.2 Gen 1 connectors.

If you have read our previous reports, you will also know that we avoid motherboards that have no way of indicating problems or issues with installation.  Not only does the Asus Maximus Z790 hero have an LED top right for Q-Codes with a Start and ‘Flex key’ below that, but also, there is a BIOS reset and Clear CMOS button on the back panel.  The bonus here is that the Flex Key button can be configured to any number of functions, and as well, the LED can be shut off on successful post, remain on or display the CPU temperature.

Last but not least, we have the ASUS Hero Z790 backplate which contains the BIOS Flashback and Clear CMOS Buttons, HDMI 2.0 port, and four USB 3.0 ports. We then have two ThunderBolt 4 ports below two Type-A 10Gbps ports, 2.5G ethernet port above that, followed by a 10Gbps Type-C port and three more SuperSpeed Type-A ports.  To the right of that we have the WiFi 6E connectors along with audio.

Checking Amazon, we are seeing the ASUS ROG Maximus Hero Z790  motherboard at a price of $880US which is fairly high but expected in consideration of the fact that this board is one of the most feature rich boards available.