Given respect to portable storage, Sabrent is without a doubt the team to beat.  They hold no reservations when it comes to speed or capacity in a portable SSD. Not only have we seen this with their speedy 10Gbps, 20Gbps and Thunderbolt 3 drives performing up to 3GB/s but also, they are the only that would dare market a 16TB at that speed.  They are never short to pull something new out of their hat and today is no different.  Enter the Sabrent Rocket/nano V2 USB 3.2 2×2 Portable SSD. 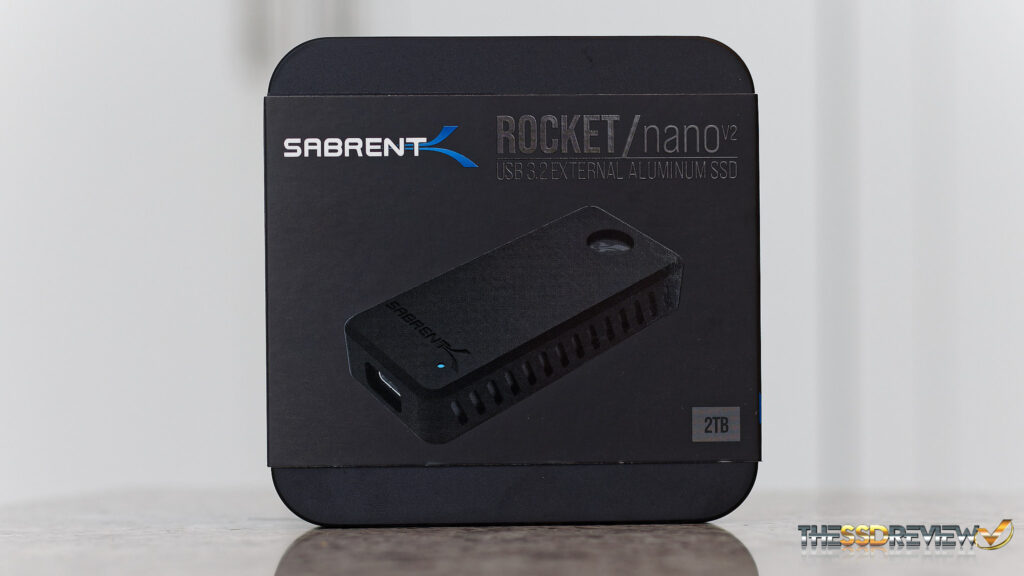 The Rocket/nano V2 is available in capacities of 1, 2 and 4TB and it is based on Phison’s own world first and fastest USB 3.2 Gen 2×2 native UFD controller with SKhynix TLC NAND flash memory.  This device will hit speeds up to 1.5GB/s, but that’s not the meat and gravy of this SSD, at least as far as we are concerned.  It is the size/speed combination that makes this SSD so much of a surprise entry to the flash world.

The Sabrent Rocket nano V2 is dead on the size of three SD cards and under 1/2″ thick. It measures in at 2.85″ long x 1.3″ wide x .6″ thick and weighs 1.75oz (54g). Considering this portable SSD is capable of storage up to 4TB and 20 Gbps data transfer up to 1.5GB/s, there really isn’t any competition whatsoever… as has become the norm with so many of Sabrent SSDs.

The Sabrent Rocket nano V2 comes in a flat black aluminum case which contains the CNC (Computer Numerical Control) aluminum Rocket v2, a silicon sleeve, Type-C to Type-C cable and a Type-C to Type-A cable.  This portable SSD is bus powered through the data transfer cable and has a disk activity LED on the lower left front of the unit.

Checking Amazon, we see pricing for the Rocket nano V2 at $119.99 (1TB), $200.75 (2TB) and $499 for the 4TB version which is a great price.  Sabrent also carries with it a very good warranty program where the device comes with an automatic 1-year warranty, but upon registration, the warranty is bumped to 3-years.