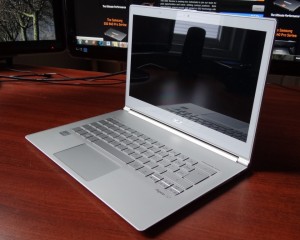 As much we like to talk about SSDs, I have to admit that it all started through my love of laptops and, to this day, hasn’t changed a bit. It started some years ago when we spoke to Dell’s first release of the XPS laptop and continues even now as I sit aboard yet another flight typing away on my MBA.

As much as I had never been a Mac fan, anyone who has handled the new MBA will understand when I state that Apple really went to town on the build of this machine.

It had surpassed my love for the Toshiba Z830, arguably one of the first true ultrabooks and the system that helped overcome my addiction in finding an acceptable Samsung Series 9 before that.

If you are an avid fan of TSSDR, you may remember that we purchased (and returned) several S9 ultras only to be caught at Computex with our pants down and not being able to connect to any Wi-Fi connections whatsoever.  This small issue has been overcome for some time now and was most likely the planting of the seed that finds us in search of the perfect ultra today.

We think you will like what we have found in this report.  It is a one of a kind.  In fact, we are pretty sure that you will be as amazed as we were to discover an ultrabook that easily surpasses the transfer performance of every portable on the consumer market today.  At just under 1GB/s transfer speeds, we are certain that interest in the Acer S7 ultrabook will easily surpass that of consumer purchases  alone.  It is thin. It is light. It is powerful and we have only scratched the surface on the standard options you will find in his machine.

The Acer S7 rips a page from Apple right off the bat (not a bad thing), in that, they have built an ultrabook that focuses on a white finish with light aluminum casing.  At only 0.47” thick and weighing in at 2.86lbs, the S7 is one of the smallest ultras available.  Its build is solid, just as we had previously spoken of with the MBA, and for the first time ever, a company has used gorilla glass for the display.  Our sample system is equipped with an Intel Core i7-3517U processor, 4GB RAM, 256GB SSD, W8 64-bit, 802.11 AG/N w/ BT 4.0, Acer Crystal Eye HD Webcam and a 4 cell battery that is not being changed by the typical user anytime soon but should average out at just over 4 hrs per charge.

For those not familiar with gorilla glass, head to You Tube and watch any number of videos of people trying to damage it. Gorilla glass provides a high gloss finish and is the absolute best protection we can find today for displays, hence the reason it’s popularity is growing from cell phones including the Samsung Galaxy Note II, the IPAD and now to ultras and laptops with the S7.  It makes sense though.

The S7 is one of the first pure version ultras to hit the consumer market as it has Windows 8 standard and is a complete touchscreen system, the display being an Acer 13.3” Multi-touch FHD Cine Crystal LCD capable of 1920X1080 resolution with integrated Intel HD 4000 graphics on board.

Our feelings on Windows 8 have always been pretty straight forward and W8 is definitely not for the faint at heart, however, Acer has included guides to get you running quickly and…..easily (gulp).  Quite frankly, I wish I had a buck for every call, pm, or e-mail I have received asking how to turn Windows 8 off.  Seems like an easy thing right? Unfortunately, Microsoft has pretty much shut down Windows 7 availability in order to force feed the consumer Windows 8 and there is nothing we can do about that.