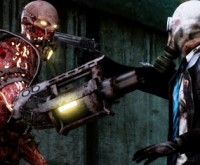 Aside from modern FPS’s, two of the most oversaturated genres in gaming are zombie shooters, and WWII shooters. After you sift through all the trash, there are maybe two or three titles from each where you can say damn this game is great.

Two of the most respected video game developers (a dying breed these days) are VALVe and Tripwire, and both share a common history in developing smash hits in both genres.

VALVe created both Left 4 Dead 1 and Left 4 Dead 2, while porting over a Half-Life mod called Day of Defeat to fill their WWII void. Tripwire on the other hand made two WWII shooters in Red Orchestra 1 and Red Orchestra 2, and converted the Unreal Tournament 2004 Killing Floor mod into a full standalone game.

If at any time the Left 4 Dead series, or Killing Floor are on sale, you can expect to see a L4D2 or Killing Floor? thread on the Steam Forums. The answer is both. Both games are amazing zombie shooters, but that is essentially where the similarity ends. To be brief, L4D is more of a casual/fun shooter, whereas KF can be described as a tactical survival-horror shooter. Eventually I’ll review the L4D series, but for now let’s focus solely on Killing Floor.

Being a multiplayer-based game, there really isn’t too much of a back-story. Kevin Clamely, the CEO and founder of Horzine Biotech, was hired by the government to create the perfect soldier. He considered all of his creations to be his children and family. The project ultimately failed, being deemed too dangerous and immoral. The main portion of the Horzine facility was shut down, but there was a secret hidden lab underground where experiments continued.

The extermination of the specimens Kevin had created failed, eventually leading to their release in London, where they started wreaking havoc. Now, it’s up to you and five others to work as a team and start eradicating the escaped ZEDs, and ultimately take down Clamely, who is now known as the Patriarch.

As stated, it’s a six-player co-op survival horror game, with your foes being the escaped specimens, alternatively known as ZEDs. They aren’t technically zombies, but rather genetically created beings. Each has their own strengths and weaknesses, but keep in mind you will be fighting massive waves of them. I’ll provide a bit of back-story and what each ZED is capable of, but remember that this is based off personal experience (if you want exact details check the KF Wiki):

Armour Piercers – ZEDs that are good at being annoying

Clot – The Clot looks like a humanoid lacking any discernible features. They are created from the DNA of Clamely’s dead son. Clots aren’t big hitters, but they are very good at grabbing targets and holding them, as well as biting through Kevlar armour. They are the lowest on the danger scale. They also make odd wailing sounds as they approach their target.

Crawler – A mix between human and arachnid genes, Crawlers are the lowest health ZEDs in the game. They are very good at being bothersome, and tend to come in packs to finish off players as they can jump and cover gaps pretty quickly. Crawlers don’t do a lot of damage, but are exceptional at chipping away Kevlar armour, and are a general nuisance due to their small frame and hitbox. They can be anticipated due to the insect-like ticking sound they make, but having a black complexion, are extremely difficult to see in dark maps.

Stalker – Stalkers look like the female version of Clots, but can cloak and become invisible. They whisper before arrival, almost sounding like ghosts. Like the previous two, Stalkers excel at shredding Kevlar vests and tend to go down fairly easily when attacked. Left undetected, they have a habit of coming in direct contact with grenades and explosives, the knockback effect and blast radius killing the unsuspecting player that threw them.

Bloat – Unlike the Boomer in L4D, Bloats can soak up a massive amount of damage, and hence their susceptible spot is the head. They are slow-moving, and wield a butcher’s cleaver in one hand for melee swings in range. The Bloat’s primary attack however is his vomit. It is an AoE (area of effect) attack that does a ton of damage and disorients its target (screen starts wobbling with acid all over, making it difficult to attack the Bloat). If shot below the head, or with enough headshot force, the Bloat will explode, showering acid in its vicinity. He has a deep voice, usually asking what’s this smell as it flounders towards its victims.

Siren – Can be compared as the female version of the bloat, but deadlier. She is based off Clamely’s wife, who was killed by a Siren sent by Clamely himself. They are short, bound in straps, and move slowly, with a melee bite attack that can also grab. The Siren’s primary attack is a high-pitched super-sonic scream that does AoE damage, and can be seen in red waves emanating from her mouth, which she will only use when a player comes in range of her. Her scream does only health damage, leaving armour intact, and can also destroy explosives that are stationary or in mid-flight. It also causes disorientation, making it more difficult to kill her.

She is typically hidden in the middle of a pack, and comes with Scrakes and Fleshpounds, destroying any explosives and guiding them safely through player fire. She also has a deceptively better than average health pool, and low headshot susceptibility, especially during her start-up and shutdown scream animation. She can be heard complaining and whining the entire time she is active. Sirens are extremely dangerous, and are high-priority targets.