So many products at FMS revolve around delivering the most performance you could image. While we were impressed with the many server storage solution providers, we are always more focused on the SSD manufacturers and devices themselves, which is why we went over to speak with Kington to see what they had at their booth this year. 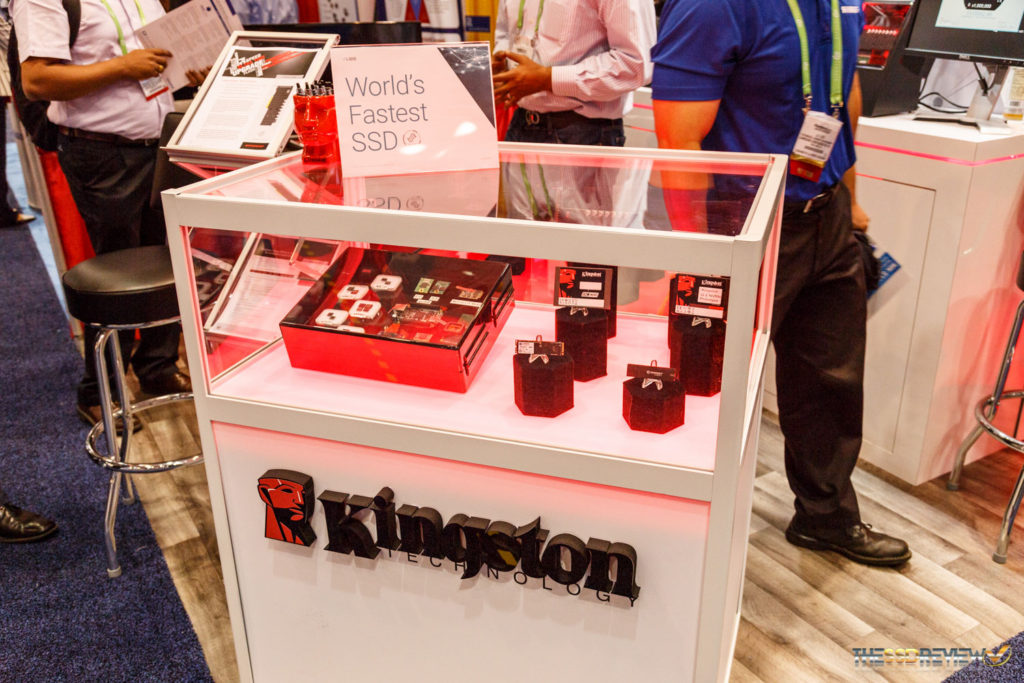 As you previously seen, we spoke with a newer company, Liqid, which showed us a fantastic server storage solution for those looking for high performance and ease of manageability. Without the help of Kingston, however, their product would have never come to light. Kingston is the manufacturer of their co-developed SSDs, the EP1000 and the Liqid Powered U.2. Both of these drives are on display displaying amazing performance.

These co-developed SSDs are utilizing Phison’s PS5007-E7 PCIe Gen3x4 SSD controller. Four M.2 SSDs combined result in the HHHL AIC while two M.2 SSDs make up the U2 form factor variant. Thanks to this design, the HHHL AIC can hit over 1.3million IOPS and 7GB/s with ease and the U.2 SSD can deliver up to 850K IOPS! Capacities up to 4TB will be available when finished, the endurance rating ranges from 1-3 DWPD, and of course, they also feature every enterprise feature you could ask for. From the looks of things, this SSD solution should prove to be a great product for those looking for high performance and reliability.

Kingston also had on display a brand new DC400 product that will be available sometime next month and if we are lucky, we should be able to get it for review soon after. The DC400 is a datacenter driven design. Kingston states it will offer consistent low latency performance for a host of read and write workloads. It features configurable over provisioning as well as two models, one that is read oriented and the other which is performance optimized. Capacities will be available from 400GB-1.8TB, however, 480GB and 960GB models will be released at first. When we get it into our hands we will be sure to see just how well it stacks up against the competition.

Finally, they also had on display some of their eMMC and DRAM products and adapters OEMs can utilize for designing products with Kingston’s memory.

Other than that, we asked them about the availability of an NVMe Kingston HyperX Predator, but they could not update an availability timeline, If you are wanting a 1TB version of their current AHCI Predator though, it should now be available for purchase. That’s all from Kingston! Be sure to keep up to date as we continue to explore what on display at FMS 2016!