It is no secret that I am a fan of portable storage.  Thunderbolt 3 Portable SSDs rank tops as we can hit speeds of 2.8GB/s, however, anything above SATA is a bonus when you work in the media world and take the amount of photos as I do.  Retail sales of flash storage has conformed just a bit as of late, trading off the pure speed of TB3 with lower pricing and the typical 1GB/s performance one might see in the latest USB 3.2 Gen 2.  A great deal of credit for this has to go to JMicron with their JMS 583 bridge controller, typically found in recent releases from Orico, Plugable, MyDigitalSSD,  and even  Lexar’s SL100 Portable SSD. Right beside that of course, is the ASMedia ASM2362 chip which we see in the Crucial X8 Portable SSD… and Samsung T7 Touch that we are reviewing today. 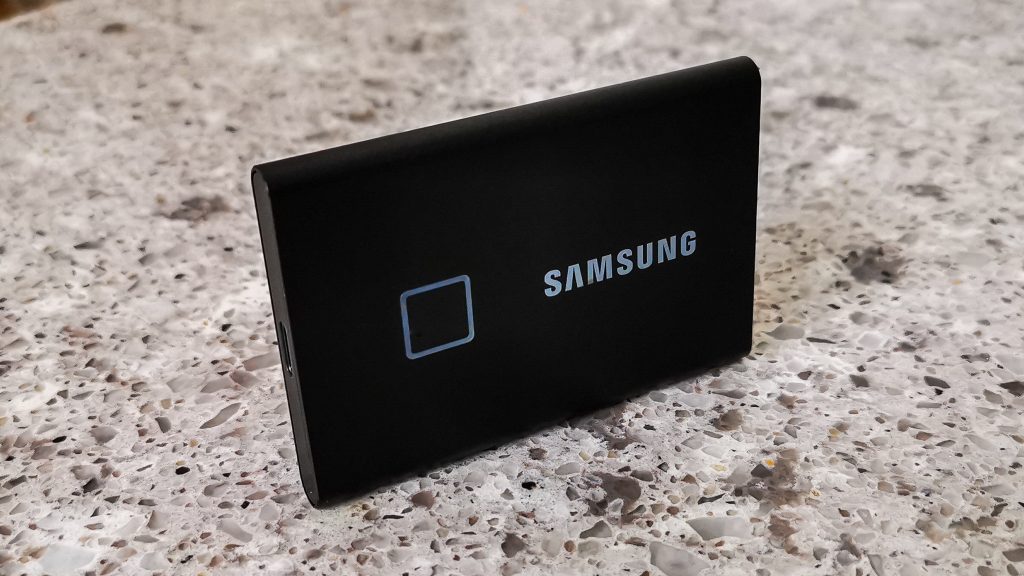 The Samsung T7 Touch is a brand new release and available in capacities of 500GB, 1TB and a 2TB version will be out soon enough. It takes advantage of the latest USB 3.2 Gen 2 Type-C interface, comes in black or silver, is of a smooth aluminum construction, and is capable of performance of 1050MB/s read and 1000MB/s write when plugged in with the Type-C to Type-C adapter.  Relying on the Type-C to Type-A adapter will result in significantly lower performance as we will demonstrate in our true data testing later in the report.

The T7 Touch comes with the storage device itself, operating instructions, as well as two plug in adapters, the Type-C to Type-C and the Type-C to Type-A for backward compatibility.  Pre-installed on the T7 are three software security programs for Windows, Mac and Android, which means that the T7 can be plugged into your Android device for quick media swapping if that’s what you are looking for.  MSRP pricing for the Samsung T7 is $129.99 (500GB), $229.99 (1TB) and $395.99 (2TB), and the T7 comes with a limited 3-year warranty.  Check Amazon pricing now.

The Samsung T7 has a features we haven’t yet seen in similar devices of this type, a built in fingerprint reader.  Once the software is installed, the user has a choice of activating the T7 Touch security features which uses AES 256-bit encryption.

The user has the choice of unlocking the device by password, fingerprint or both, and we found that fingerprint recognition alone works great and is almost instantaneous when plugged into any machine.

Let’s check out the performance on the next page…