Team Group has announced a SATAIII SSD designed exclusively for competition games and gamers — the Dark L3.  Die-hard gamers will appreciate the enhanced sensations of speed and fierce fights attainable with the ultra-performance of the Dark L3.  The 2.5″, 7mm form factor allows the Dark L3 to bring top-notch gaming to desktop PCs, laptops, or Ultrabooks. 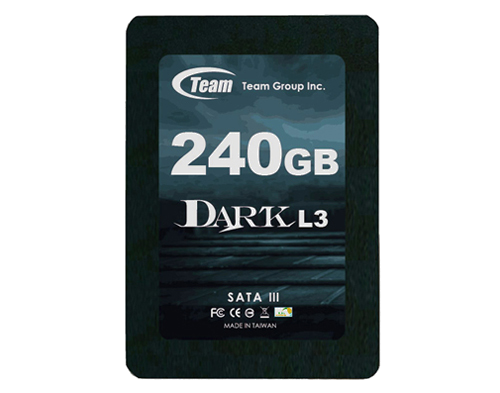 In any Massive Multiplayer Online Role-Playing Game (MMORPG), the smooth and uninterrupted flow of game play is critical to the player’s survival; especially so in a fierce battle.  Traditionally, the HDD or SSD in any gaming system is the potential bottleneck for data flow and smooth game play.  The Dark L3 is designed to minimize this potential bottleneck, along with significantly decreasing game load times to as little as 12 seconds!

Team Group’s Dark L3 utilizes the Phison PS3108-S8 NAND controller, along with multi-level cell (MLC) NAND flash memory.  The Dark L3 will be offered in capacities of 60GB, 120GB and 240GB.  ATTO Benchmark software shows sequential read speeds of 550 MB/s for all capacities.  ATTO sequential write speeds show as 450 MB/s for the 60GB and 120GB versions, and 500 MB/s for the 240GB  model.

The Dark L3 is compatible with Windows XP, Windows 7, Windows 8 and Google Chrome operating systems.  Mean time between failures (MTBF) is stated as 4,000,000 hours, and the Dark L3 is backed by a three-year warranty.  Team Group has not specified if the Dark L3 will be offered outside of European markets.  The Dark L3 product page can be viewed here.