Focused on the SanDisk Extreme Pro, last week’s SSD of the Week was aimed towards high end SATA performance at a cost that wouldn’t break the bank. This week, we will be following a similar trend, however this time, we are focusing on the PCIe interface.

When working with large media files, speed is king. The faster you can edit your media, the faster you can give a customer their product and make your cash. These days, throwing HDDs into RAID 0 arrays for editing are over. Even with 8 of the fastest HDDs on the market and a high end RAID controller you can’t hit speeds that PCIe SSDs can. And even if you were able to, you would end up consuming a lot more power, space, and increasing your risk of data loss with so many drives. This is where the RevoDrive 350 we reviewed back in April comes into play. 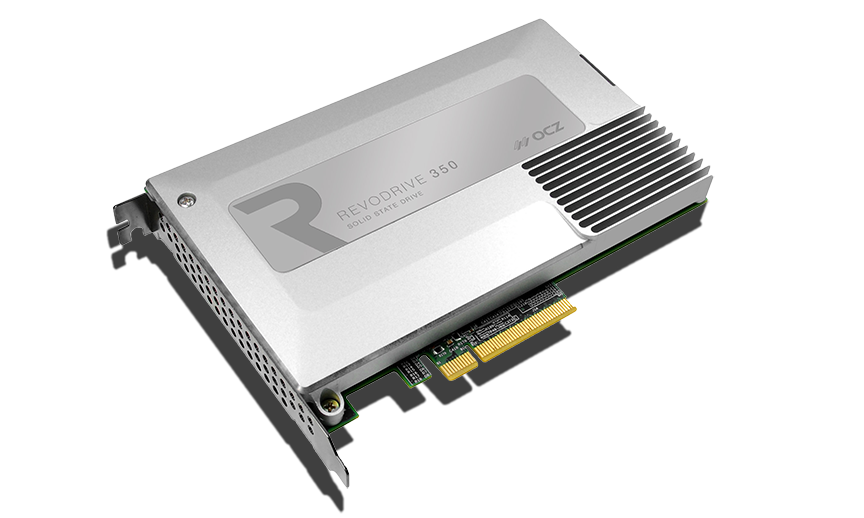 Normally, when thinking of PCIe drives, the main thing on your mind is usually speed, and cost effectiveness doesn’t seem to be in the same mindset. Our Last PCIe SSD of the Week was the Intel DC P3700 and that drive goes for a little more than $3 per GB. If you want 800GB of capacity, you have to fork over around $2,500. However, the OCZ RevoDrive 350 helps bring PCIe SSD solutions closer to a consumer cost. For about $1,250, you can get a 960GB RevoDrive 350. That is about $1.3 per GB.

At this price most media professionals should be jumping for joy! Take our earlier example of the 8 drive RAID 0 array configured with a high end RAID controller. Take into consideration the cost of the drives and RAID controller alone and you are looking at costs over the price of the RevoDrive for much less performance.  The RevoDrive 350 offers plenty of work room for most projects with a maximum capacity of 960GB.  Other capacities are available at 240GB and 480GB as well, but with a slight price per GB increase as you scale to smaller capacity.

Sequential speeds are rated for up to 1800MB/s read and 1700MB/ write. Which is roughly 9x the performance of the fastest HDDs on the market. Random IOPS are rated for up 135,000 read and 140,000 write…essentially magnitudes faster than any HDDs IOPS rating.

The RevoDrive 350 is full-height/half-length form factor and connects via a PCIe 2.0 X8 interface. It features TRIM, 128-bit AES encryption support, and rated for 50GB of writes a day for 3 years. Power consumption is rated for up to 10W idle and 14.5W active, which is about what an average SAS HDD consumes.

Offered at a very low MSRP with performance near 2GB/s, the OCZ RevoDrive 350 is definitely a drive to check out if you have a need for speed.

Check out the RevoDrive 350 on Amazon Today!