SSD of the Week – Is the 2TB CUK Cyclone a Samsung 3D V-NAND, SandForce or JMicron?

Okay, so this Week’s SSD of the Week is a bit extraordinary and even leaves us a bit confused. Just when we thought the 2TB SSDs from Samsung had no competition we stumbled across a new 2TB SSD while looking for deals on Amazon! It is called the CUK Cyclone by a seller called Computer Upgrade King.

Immediately we asked ourselves, why haven’t we heard of these guys before? After doing a bit of research, we found that they have been an accredited reseller and system builder business in Virginia since 2012. They seem to also have a good rating on eBay, which they have been a member of since 2000. 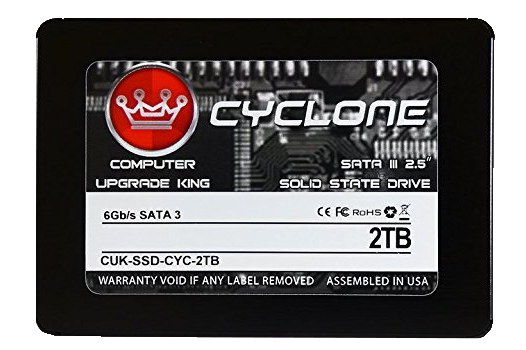 When it comes to the controller for the 2TB model, this is where it gets interesting. On Amazon, this drive is listed as having a JMicron controller, but in contrast their website lists it as having an MEX controller and 32 layer 3D V-NAND with AES 256 bit encryption support. Could this be the first drive out on the market with the new JMicron JMF680 controller? Or could this be a rebranded Samsung SSD? We are betting on it being a JMicron drive, but you never know. The listed MEX controller could be a misprint for MHX, which is in the 2TB Samsung 850 EVO and Pro SSDs as the MEX controller cannot support over 1TB capacities.

We will be contacting CUK shortly to find out more information and see if we can secure a sample for review. Until then, comment down below and tell us what you think. Could this be a viable SSD option for you at 2TB or are they just really confused as to their own specs?  In any case…2TB at $749 is definitely in the large capacity value realm.

Check out the CUK Cyclone SSD at Amazon Today!