Today at Storage Visions 2015, we met with Siobhan Lyons, Sr. SanDisk PR Manager, and Brian Cos, Sr. Director of SanDisk Enterprise Storage Solutions, both of who had some great SSD news!.  Today SanDisk announces a new affordable SSD line option to customers, the SanDisk SSD Plus. They are also announcing an additional mSATA form factor to the SanDisk Ultra II series of SSDs. 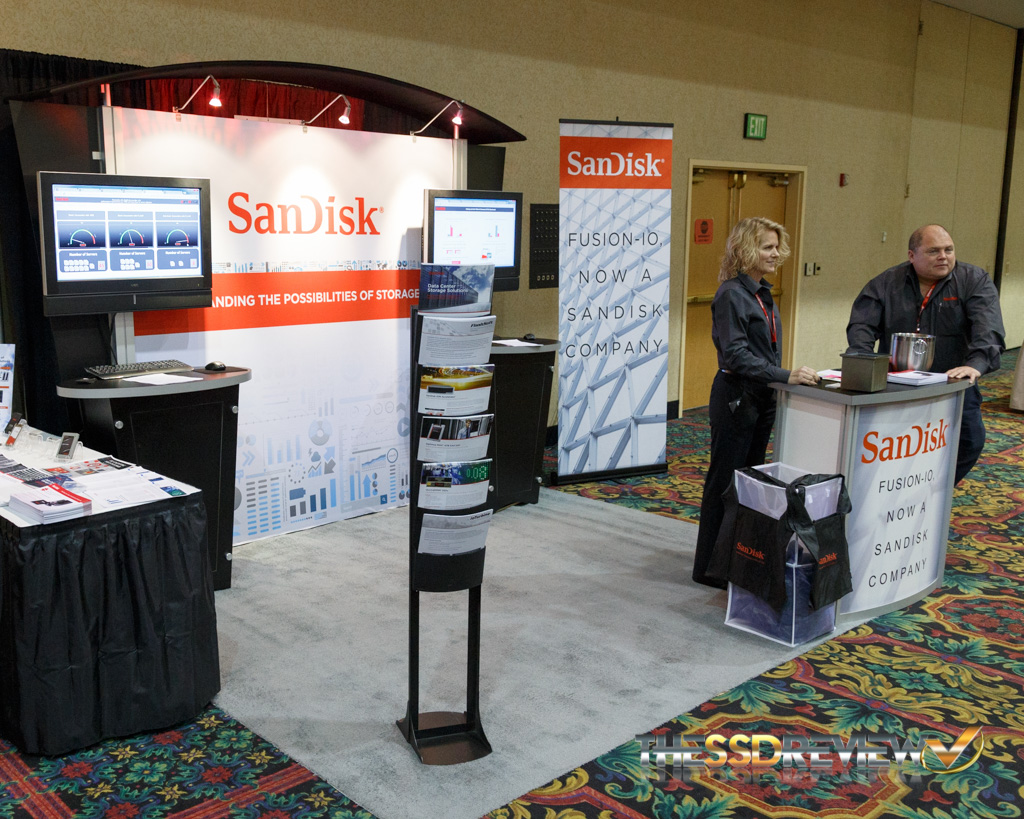 The SSD Plus is a 2.5” SSD and will only be offered in two capacities, 120GB and 240GB, which is not too surprising as they are the lowest tiered drives in their lineup. These drives are designed as hard drive replacements, where users want faster speeds, better battery life, as well as an affordable price. With up to 23x the performance of a typical hard drive, it will be able to deliver faster boot and application load times, which result in eliminating the need to completely replace a slow laptop or desktop PC. The SanDisk SSD Plus will be available in Q1 2015 and will come with a 3-year warranty. MSRPs will be $69.99 for the 128GB and 109.99 for the 240GB model.

Next, their Ultra II series SSDs gain a new form factor in mSATA. With the ever growing notebook and tablet market, it is ideal to expand their lineup with an mSATA offering. It will deliver competitive performance with read speeds of up to 550MB/s and will be offered in capacities of up to 512GB. The SanDisk Ultra II mSATA SSDs will also include a 3-year warranty and be available in Q1 2015. Prices will be $73.99 (128GB), $115.99 (256GB), $220.99 (512GB).

Furthermore, these SSDs will include their downloadable SanDisk SSD Dashboard which provides a plethora of management tools for the end user such as benchmarking, health monitoring, manual TRIM scheduling, and firmware updates. Additionally, the SSD Dashboard comes with Apricorn EZ Gig IV cloning software for easy migration, TrendMicro™ Titanium™ antivirus, and even Absolute® Lojack in case the PC is misplaced or stolen.

On the enterprise side of things, Brian Cox went over a few of their existing products such as their UltraDIMMs, which offer speeds of up to 880MB/s and 600MB/s read/write and up to 140K/44K read/write IOPs while still maintaining < 5 microseconds latency. These are available in capacities of 200GB and 400GB.

Furthermore, they showed off their SX 300 Fusion ioMemory PCI Express Application Accelerator. It is designed towards read intensive applications and is rated for up to 350K/385K read/write IOPS and latencies of up to 92/15 microseconds read/write. Speeds are up to 2.7GB/s read and 2.2GB/s write and it is available in capacities of 1.3TB, 1.6TB, 3.2TB, and 6.4TB.

Their new Lightning Gen. II 12Gb/s SAS SSDs provides the highest performance for mission-critical hyperscale, cloud and virtualized data center application workloads. They utilize 19nm SLC and eMLC NAND flash memory and offer random read/write performance of up to 190K/100K IOPS as well as sequential speeds of up to 1000MB/s read and 600MB/s write. Within the product line are three subdivisions, the ECO, Ascend, and Ultra. The Eco is rated for up to 3 drive writes per day, the Ascend is rated for up to 10, and the Ultra is rated for up to 25. Capacities for the Lightning Gen. II SAS SSDs range from 200GB to 1.6TB.

Finally, on the hardware side of things, there are some insights on what SanDisk will be doing down the road. There is word of SanDisk releasing a new CloudSpeed SSD in Q2 of 2015, which will utilize NAND flash produced in 15nm lithography.

More interestingly, building upon the high demand of their OptimusMax SSDs, there was some hinting towards adding another product line down the road aimed towards active archives. Over the past few years SanDisk has been getting more and more interest in this type of solution, where cloud storage and social media companies don’t want the fastest performing storage, but something that will still be much faster than traditional HDD options.

SanDisk is also pushing more application acceleration software to help speed up high demand environments. FlashSoft 3.5 offers IT managers a cost-effective way to boost database and application performance on Windows Server 2012 and 2008 systems while reducing the IOPS load on the storage infrastructure. Through FlashSoft, applications such as Microsoft SQL Server, MySQL, Microsoft Exchange, and Microsoft Sharepoint can be accelerated to up to 11x the performance of an HDD only. It allows for up to 16TB per cache and up to 4 caches per server. It also supports for up to 2048 accelerated volumes.

On top of FlashSoft 3.5, they have ioTurbine 2.2 which allows is another SSD caching software that can work with any SAN or NAS storage to deliver up to 5x performance for virtualized environments and has support for VMware vSphere vMotion, DRS and HA features. It can also dynamically reallocate cache across servers and guests.

Be sure to keep up with us as we continue with our Storage Visions 2015 coverage!