PMC, a leading semiconductor and software solutions innovator, is announcing a new ultra-fast storage class memory tier that accelerates critical applications in all-flash arrays and scale-out storage used in data centers and enterprise deployments.  PMC’s new Flashtec(TM) NVRAM drives are able to combine the endurance and speed of DRAM with the persistency of NAND flash memory to deliver performance that is ten times greater than the fastest solid-state drives (SSDs)! 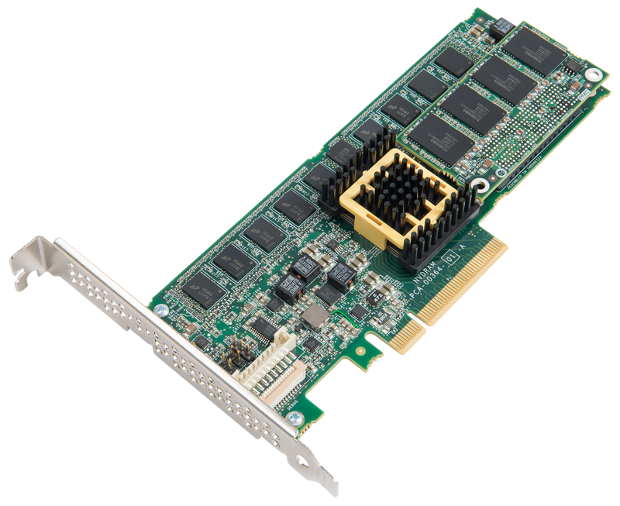 Utilizing the latest PCI Express (PCIe) 3.0 interface standard, the Flashtec NVRAM drives connect directly to the host to optimize CPU utilization and maximize overall system performance — up to (more than) 10,000,000 IOPS and sub-microsecond latency!  The new Flashtec solution is based on the industry-standard NVMe interface, which enables plug-and-play PCIe connectivity, and decreased time to market.

PMC’s new Flashtec NVRAM drives feature DRAM-like endurance to boost the overall performance of critical applications by eliminating bottlenecks in the system, with no compromise to reliability or system availability.  The Flashtec NVRAM drives can be used either as a persistent memory extension that is mapped directly to the host (delivering more than 10,000,000 IOPS for small random access transactions), or as NVMe block storage for more efficient DMA transactions (achieving more than 1,000,000 random 4K read IOPS).

According to Derek Dicker, vice president of the NVM Solutions Group at PMC, “Native PCIe-based solutions are a major disruption to the SSD market because they provide a direct link between the CPU and flash, breaking the traditional performance scale.  The PMC Flashtec family sets a new benchmark for storage performance, and our standards-based architecture allows our customers to get their storage solutions to market much sooner with differentiated features tuned for cost, performance and endurance.”

PMC’s Flashtec NVRAM drives are based on PMC’s own NVMe controllers to provide large capacity, high performance and high reliability for storing the world’s critical data.  PMC’s controllers allow for SSDs with up to 8TB of capacity, and performance of (up to) 875,000 random 4K read IOPS, which is twice the capacity and performance of competing controllers.  Dual-port functionality is also featured, allowing for high availability of enterprise class applications, redundancy and sustained reliability.

The small form factor Flashtec NVRAM drives will fit into virtually any server, occupying only one low-profile PCIe socket and enabling high-density rack configurations.  An included NVMe driver simplifies integration, requiring no custom development for proprietary interfaces and applications.  A design that incorporates a Super Capacitor Module that operates for five years without maintenance or replacement allows for elimination of an uninterruptable power supply (UPS).  This not only significantly reduces cost of ownership, but also frees up rack space that is often at a premium.

PMC’s Flashtec NVRAM drives are available in capacities of 4GB, 8GB and 16GB, and production quantities are anticipated by Q4 of 2014.  PMC’s NVMe flash controllers are available in either 16- or 32-channel versions, and are currently in high-volume production.

You can visit PMC this week at the 2014 Flash Memory Summit, from 8/5 through 8/7 at the Santa Clara Convention Center in Santa Clara, California.  You will find PMC at booth #416.