This week at CES 2015 in Las Vegas, our good friends at OCZ introduced us to a few new SSDs, as welll as a dynamite new SSD controller. On their display floor, OCZ has a brand new Vector series SSD, the Vector 180. This SSD will be the last of their Barefoot 3 powered product line. More specifically, it features a Barefoot 3 M00 controller and Toshiba’s latest A19 MLC NAND flash. It also has a new power failure management feature, PFM+, which will protect the drive from power failures and during hot swapping. 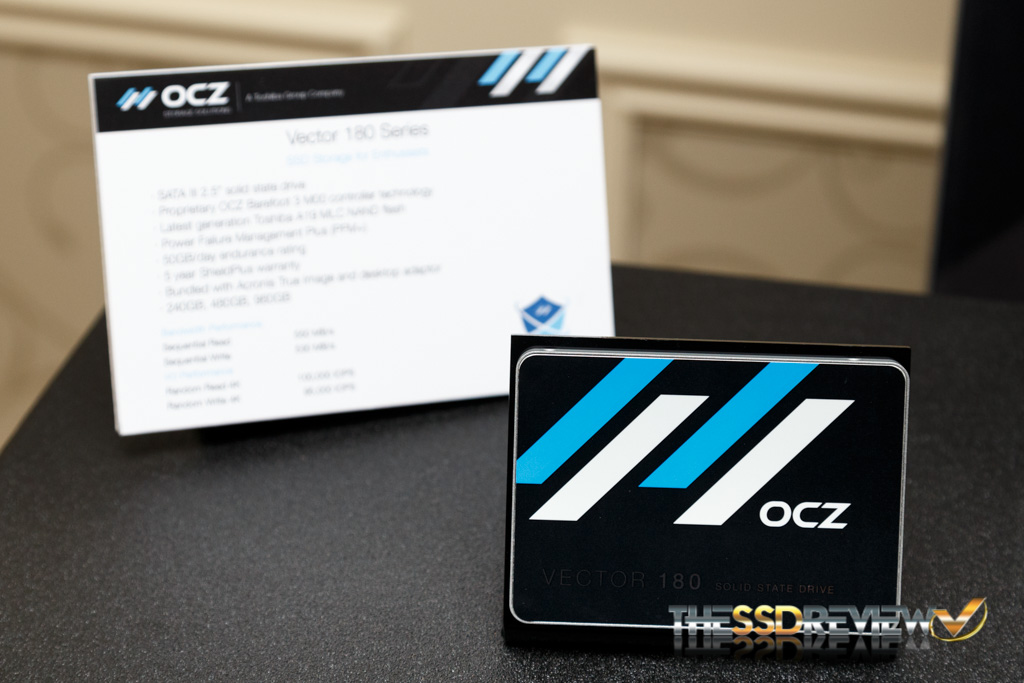 This is an enthusiast grade SSD with sequential performance of up to 550MB/s read and 530MB/s write. Random 4K IOPS are rated for 100K read and 95K write. It is rated for 50GB/day write endurance and comes with their 5 year ShieldPlus warranty. Capacities are available in 240GB, 480GB, and 960GB. And it comes bundled with Acronis True Image and a desktop adapter.

Well, now that the Vector 180 is the last OCZ to be released with a Barefoot 3 controller, you may be asking yourself, “what is next?” In short, a beast of a new controller, JetExpress.

JetExpress has been designed for both consumer and enterprise applications. In order to support the new NVMe protocol, OCZ had to completely start from scratch with their JetExpress SSD controller. It has native SATA and PCI Express support and supports multiple form factors such as M.2, 2.5” SATA, and SFF-8639. One of the feature of this controller is that it dynamically adjusts error correction algorithms as the flash wears over its useful life. This ability increases flash endurance while allowing for the best performance possible over the life of the drive.

JetExpress is expected to first launch in enterprise products starting mid-2015. Consumer products featuring the new controller should be expected by the end of the year.

Furthermore, OCZ showed off another little beast, their latest enterprise PCIe 3.0 NVMe SSD, the Z-Drive 6000. This drive comes in a SFF 2.5” form factor and comes with native PCIe 3.0 x4 support and is NVMe 1.1a certified. The controller for this drive is a PMC Sierra Princeton chip with OCZ-proprietary firmware.

The SFF-8639 connector supports hot plugging. The drive utilizes internal RAID for read speeds up to 3GB/s and write speeds up to 2GB/s. Random 4K IOPs are rated up to 700K read and 175K write. It also has power loss data protection and XTS-AES-256-bit encryption. There is closed loop power control w/SPP and power consumption is rated at 25W and there are 20W and 15W low power mode options. Finally, capacities for the Z-Drive 6000 are 800GB, 1.6TB, and 3.2TB.

And to wrap things up, they also had their Saber 1000 series SSD on display. It is an entry level enterprise SATA SSD ideal for hyperscale, web-hosting, and distributed computing environments. It hosts a Barefoot 3 controller and Toshiba A19 NAND flash. This combination allows for sustained read and write speeds up to 550MB/s and 515MB/s respectively. Random 4K read performance is rated for up to 98K IOPS and write for 23K IOPs. As with the OCZ Vector it also has PFM+. It also has central management capability via OCZ StoragePeak 1000. Capacities are available in 240GB, 480GB, and 960GB.

Be sure to keep up to date with us as CES 2015 continues!