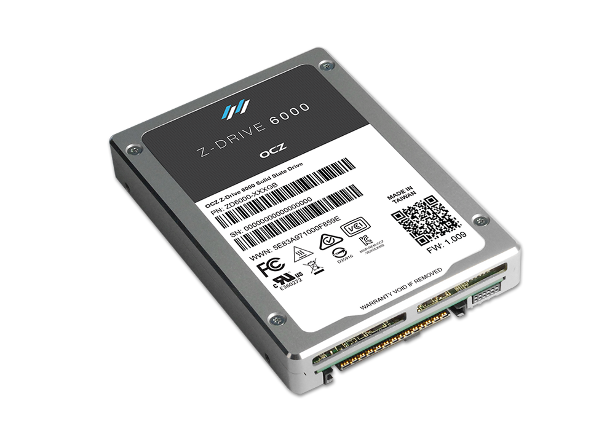 The NVMe specification was designed from the ground up to enable specific benefits of non-volatile memory-based storage, and extends traditional PCIe flash storage to new levels. NVMe features a more streamlined memory interface, command set and queue architecture that delivers high resiliency and faster access to important data. Storage vendors and system builders are both able to develop different components of a storage ecosystem to a standard set of specifications with wide interoperability support between storage devices, software and host platforms.

According to Daryl Lang, CTO of OCZ Storage Solutions, “Our NVMe implementation yields dramatic boosts in the number of random I/O operations per second that an enterprise system can process and provides the reductions in I/O latency responses that OEMs require. As the NVMe standard represents new platform and infrastructure opportunities for OEMs, our Z-Drive 6000 Series delivers leading headline performance, coupled with large capacities, dual port capabilities, hot-swappable 2.5” and HHHL add-in card form factors that position this series as the highest performing and most robust for this class of products.”

NVMe is anticipated to create new opportunities for stronger, faster and better flash-based storage applications, while dramatically improving PCIe SSD deployments over the next five-year period. Jim Handy, of widely-recognized semiconductor analysts Objective Analysis, observes that “The NVMe SSD market is poised to take off, now that it provides an efficient storage interface between flash and the processor. By joining the NVMe SSD market early with a compelling product, OCZ has won itself an opportunity to become a leader.”

OCZ’s Z-Drive 6000 Series of SSDs are geared toward enterprise applications that require low-latency and high-performance I/O responses, such as compute-intensive, online transactional, analytical and cloud-based usage scenarios. The Z-Drive 6000 Series offers capabilities that can produce high scalability and massive parallelism to meet both current and future storage needs. The series is divided into three categories:

Z-Drive 6300 AIC Series for mixed workload applications – available as a Half-Height/Half-Length (HHHL) add-in card, and in capacity points of 800GB, 1.6TB, 3.2TB and 6.4TB. Performance characteristics are identical to the 6300 SFF series, and they both utilize Toshiba A19nm eMLC NAND. All capacities of the 6300 AIC series are anticipated to be available in the second half of 2015.

Upcoming capabilities of the Z-Drive 6000 series include dual-port capabilities that allow two separate host systems to access the same storage device concurrently, or allow redundancy within the host. In the event of a system failure, and one of the data paths goes down, the remaining available data path continues to operate as if no failure occurred, with no loss in Quality of Service (QOS). Also, the Z-Drive 6000 series supports hot-swap capabilities for 2.5” drives, pre-set power thresholds and the ability to throttle by temperature to support a variety of enterprise ecosystems. The 6000 series are rated for endurance of up to 1 drive write per day (DWPD), both 6300 series are rated for endurance of up to 3 DWPD, and all are backed by a five-year warranty.