Our featured shot displays the new Micron mSATA 6Gbps prototype which just may be seen in new release laptops and net books early next year. Of course it features Micron NAND flash memory and would also contain the newly updated Marvell controller which would make this SSD one powerful piece of hardware.

The shot was released at the recent Needham Investor Conference where it was accompanied by the Micron SSD roadmap seen here: 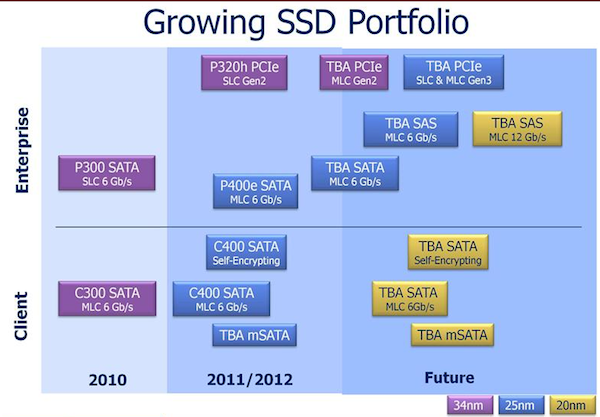 Roadmaps are always great to see as they indicate things to come, however, a word of caution always has to be given.  It wasn’t so long ago that an Intel roadmap was leaked and everyone thought Intel to be out of the SSD game in 2011 which has definitely not been the case.

Of interest here is the fact that, in the near future, we can see a possible release of a 6Gbps MLC PCIe card which might be a nice entry into the enthusiast fold just as the 6Gbps mSATA will be within future notebooks.  Similar to the  transition from 34nm NAND flash memory to that of 25nm, we will be seeing the same transition with 20nm NAND flash memory in 2012. Here’s a larger shot of that mSATA card which would be a welcome challenger to the many we have reviewed already: