Crucial Memory and Micron, their parent company, have got some big announcements today. At Micron Insight in San Francisco, the company announced a bunch of new products, including their first portable SSD under the Crucial brand as well as two new enterprise SSDs.

Crucial’s next step into the consumer market includes a sleek-looking portable SSD, the X8. With growing demand and declining HDD sales, portable SSDs are becoming quite popular these days. People are ditching the old tech for speedier flash. As the company’s first external SSD, the X8 is set out to be a top value. 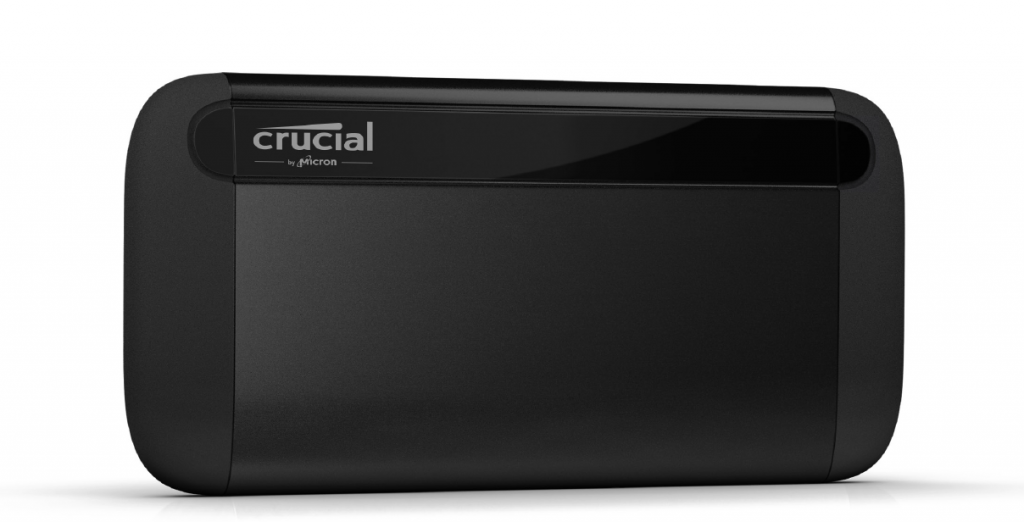 It’s not your standard SATA based external SSD, rather it is powered by an NVMe drive that is quite close in DNA to the P1. Basically, it’s a QLC NAND based SSD with some tweaked firmware for use as a portable device at the end of the day. So, it features a dynamic pseudo-SLC cache to boost write performance.

With its aluminum enclosure, it is rated to withstand a 7.5’ drop onto the carpet and 3’ drop onto concrete without an issue, although, it should be able to operate after tougher incidents still. As well, it can handle extreme temps and its compatible with almost anything you try to use it with; Windows, macOS, PS4 and PS4 Pro, Xbox One and Xbox One X, as well as the iPad Pro (2018 USB-C model) and Android.

In addition to the X8, Micron is also adding in some 96L TLC flash into their enterprise products. The 5300 series is the industry’s first enterprise SATA SSD built on 96-layer 3D TLC NAND. It comes in both M.2 and 2.5” 7mm form factors and the series is also split into three products, the 5300 Boot, PRO, and MAX depending on your workload needs. Capacities range from 240GB up to 7.68TB too.

With high performance and consistency in mind, the 5300 is able to deliver sequential performance of up to 540/520 MBps read/write and upwards of 95K/75K IOPS read/write in random performance. And, it’s built on a proven architecture, resulting in a meantime to failure (MTTF) rating of 3 million devices hours, a whopping 50% higher than the norm. It also features an UBER rating of 10^17, which is higher than HDDs. It is quite enduring too. Depending on the model and workload, the 5300 can withstand up to 24,528 TB of writes before the 5-year warranty expires.

Feature-wise, it is quite a robust device. It features flex capacity, AES 256-bit encryption, TCG Enterprise configurability, TCG Opal, as well as many standard enterprise features like power loss protection for data-at-rest and in-flight, enterprise data path protection for both user and metadata, secure firmware, and adaptive thermal monitoring.

If you have a need for speed, the 7300 is a much speedier option than the 5300. Like it, the 7300 incorporates Micron’s latest 96L TLC into its design and comes with a robust enterprise feature set.

The PRO model is rated for one drive write per day while the MAX is rated for three over 5-years of warranty. So, up to 49 PB of endurance at the high end and down to 1.1 PB of endurance on the low end of the product line. It also comes with an UBER rating of 10^17, but the MTTF rating isn’t as high as the 5300, instead, it is 2 million hours.