As much as I am a fan of the LSI SF3700 controller, I have to wonder if LSI  introduced it just a bit too soon.  We had a chat with LSI’s Thad Omura this week at Computex, and we pretty much already knew what we were in for.  Perhaps I am just asking for too much too soon… 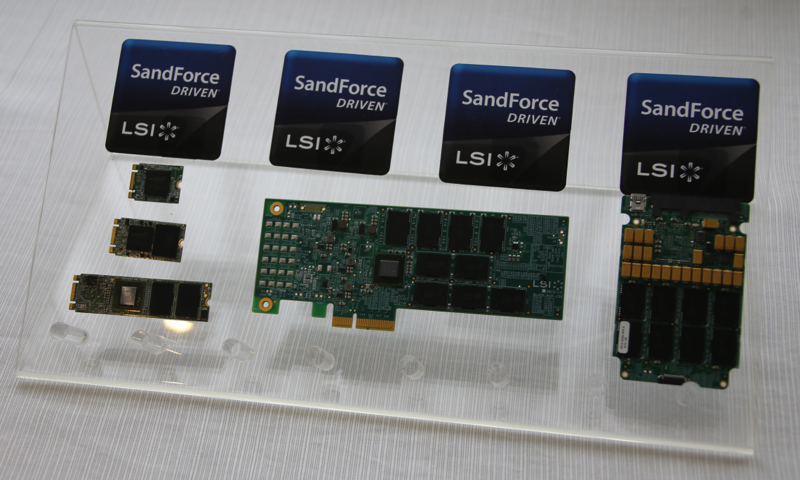 Imagine that right now there are three LSI SandForce teams, consisting of hundreds of people in the US, India and Asia, all working on fine tuning the SF3700 firmware.  Two problems remain which are that we need to see the heat of the SF3700 come down, along with performance reach what LSI considers it’s optimum speeds of 1.8GB/s.

LSI did have their SF3700 on display and performing at 1.3GB/s.  This is encouraging as it is actually the first time we have really seen throughput displayed.  Perhaps reasoning for this is that fact that early testing was well below what we are seeing here.  Will we see this on the streets by Q4?  Time will tell but we are sure that manufacturers will also spend a bit of time fine tuning things once they get the final product in their hands.  Right now, just as we had seen with our previous ADATA post, there are many ‘LSI Evaluation Samples’ being pictured that are very tightly controlled by LSI, each with that now famous LSI sticker!

Another first we did see during our interview is shown here with Micron’s L95B 16nm NAND flash memory functioning with the LSI controller.

All in all, we have to say that there is just so many things that can happen with LSI SandForce in the near future.  The Seagate purchase opens up even another door where honoring SF contracts in the long term would be tantamount to equipping your competition, much like we see with Samsung and Apple.  We do know that LSI is already working on a next gen product so perhaps we might see this as being the final true SandForce product, whereas the next generation is more strictly controlled by Seagate.

I may be thinking out loud right about now but one thing we are sure of is that Seagate took a swift kick with the loss of the LAMD controller through the LAMD purchase of SK Hynix.  Many believed that controller did have a future, but really never made it to prime time after the purchase.

Only time will tell.