The biggest roadblock in moving mainstream consumers from hard drives to SSDs is that of migration.  It seems like such a difficult process when one has to do anything related to opening up a PC and switching out a hard drive for a SSD, never mind having to understand the instructions to migrate the system in the first place. We get a front row view of this as probably 40-45% of our inbound e-mail and pm’s are help questions relating directly to migration.  Inateck FE2005 and FE2007 HDD/SSD Enclosures are available and inexpensive to help with this. 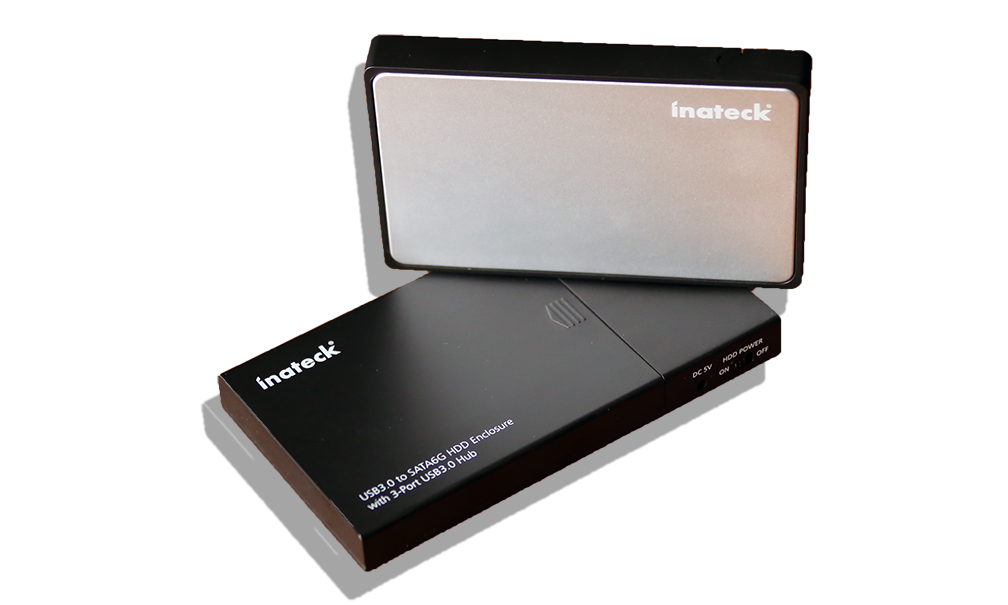 Both of these enclosures hold 2.5″ hard drives or SSDs.  Both connect to your computer by USB 3.0 and are fully UASP compatible meaning they can transfer data in ‘SuperSpeed’ fashion, up to speeds well over 400MB/s in the case of an SSD.  Both are completely plug and play, tool and driverless, and both are fully compatible with all versions of Windows and Mac.  Simply insert your storage media into the case, plug-in and it is recognized.  It is just that easy.  Oh wait… did we say that at $16.99

for the FE2007, they are very inexpensive considering quality?

The FE2005 is a plastic external HDD/SSD enclosure that has been optimized for SSDs with the JMicron JMS567 chip, enabling this enclosure to reach speeds above 400MB/s with a solid state drive.  Not only does this enclosure provide an excellent means for migration, but also, one can use it after the migration as an external storage device with their hard drive installed.

The FE2005 simply contains the USB connector on one end, along with an activity light and a lock to keep the unit closed.  It is extremely inexpensive and can be found at Amazon

Looking at SSD performance of the Eluktronics 1TB SATA3 SSD

within the FE2005, we see that it reaches transfer speeds in the area of close to 430MB/s for both read and write performance.

Whats most impressive about the FE2005 is the fact that we also get relatively similar perfomance in Crystal DiskMark, where the data samples used for testing are 100% incompressible data, vice the easily transferred compressible data used in ATTO.  Incompressible data is representative of media such as music, videos and pictures.