Today’s solid state drives are worlds apart from those of just 3 years ago, however they are not yet perfect.  Performance degradation can still be observed through seasoning of the SSD as well as filling it to capacity.  SSD manufacturers have been successful in combating the effects of seasoning but performance degradation when an SSD is filled to capacity seems to be just a bit more difficult.

Typical testing of most drives, through use of random data, will result in an observable performance drop which may start as soon as the SSD is filled past the 70% mark.  This article will describe the common characteristics of SSDs followed by a simple method to ensure that maximum performance is sustained with the drive. 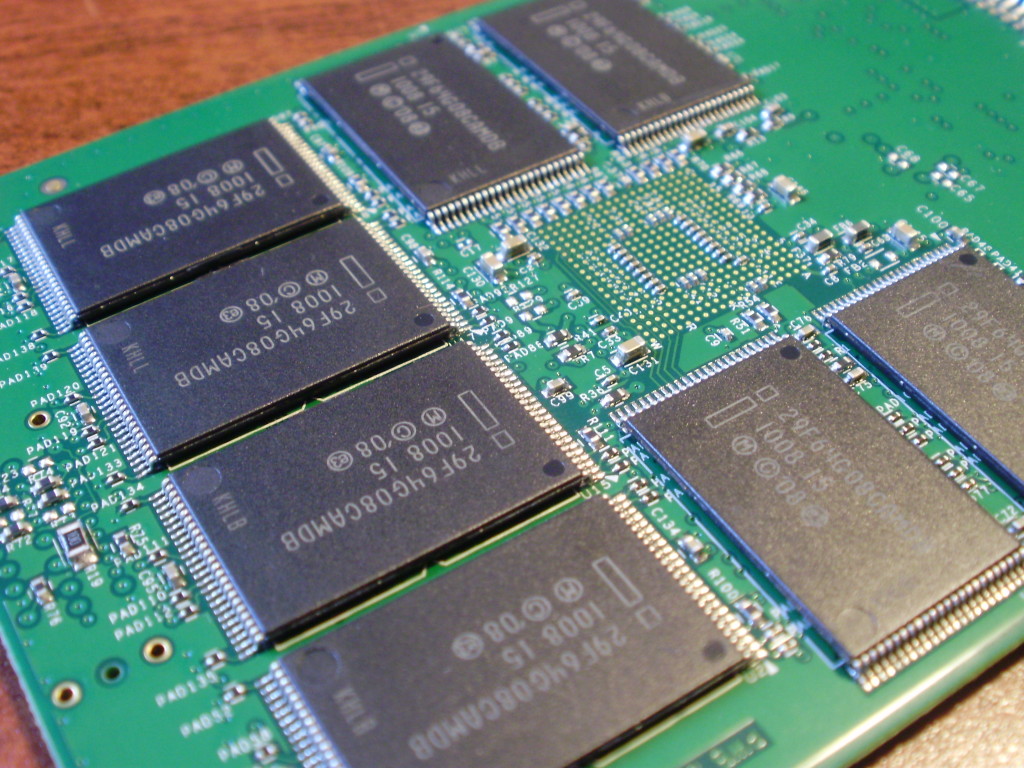 Much has been said with respect to performance degradation as a result of the ssd becoming seasoned over time.  By seasoned, we mean that the drive will eventually use up all of its empty blocks of NAND, or memory and, without TRIM, the process of writing to a drive actually becomes that of reading the block of data, understanding that it is invalid, erasing and then writing rather than simply writing to a clean block. Performance is greater when writing to clean memory vice memory which has previously been used and contains invalid data that has not been cleared.  The root cause of degradation is that when a non-TRIM ssd is told to delete data, it actually only marks the area as clear which leaves the invalid data intact and tricks the ssd into believing that the NAND flash is available.

Data on a SSD cannot simply be over-written as it is done on a hard drive and this gets a bit more complicated when we erase information and the block that it is located on also contains valid information that we dont want deleted.  The process then becomes read data, recognize the valid information, move it to another clean block, erase the present block and write. Manufacturers have tried to combat this issue of performance degradation by creating 3 solutions to the problem which are wear leveling, TRIM and ITGC (or Garbage Collection).

Wear leveling is the process of the ssd understanding how many times each cell of memory has been written to and then ensuring that all are all written to evenly.  After all, the life span of the ssd is dependent on the total number of writes that are written to and this has been coined as write endurance.  Unlike the hard drive which stores information in a static location, the SSD will move information around on a continuous basis without your knowledge to ensure that all cells wear evenly, thus affording a longer lifespan for the ssd.  By also doing this, the drive can ensure that only the valid information is used, leaving blocks to be cleaned up by TRIM or ITGC, again without the knowledge of the user.

Garbage Collection (GC) is the process by which the SSD recognizes, in idle time, which cells are valid and which are not valid (or deleted) on the drive.  It then clears the blocks of the invalid data to maintain the speed of writing to clean pages or blocks during normal operation.  GC was initially shown to be a last resort if TRIM was not available, however, recent releases are showing new methods to be very aggressive and results equal to that of TRIM are being observed.  This is a huge benefit to those using RAID systems where Garbage Collection is accomplished as TRIM is not an option.

The SSD Review was able to discuss GC and TRIM with Crucial as it pertains to their SATA3 releases as it has been observed that their RealSSD C300 SATA3 drives do not appear to show any performance degradation over extended use.  Crucial confirmed that they had to consider that TRIM would not pass through the present release of SATA3 drivers which helped recognize that very aggressive GC would be necessary for the C300 SATA 3 SSDs success.  The subsequent result was that many forum threads were created by avid users who were questioning whether TRIM was, in fact, working in their SSDs as no performance degradation was seen even in the toughest of test beds.  To dispel a common belief, it is not the Marvell processor of the Crucial RealSSD that prevents TRIM from being passed, but rather, that of the hardware and drivers of SATA3 capable motherboards.  All Crucial SSDs are fully capable of passing TRIM direction to the OS.

TRIM occurs when the ssd clears blocks of invalid data.  When you delete a file, the operating system will only mark the area of the file as free in order to trick the system into believing the space is available. Invalid data is still present in that location.  Its like ripping out a Table of Contents from a book.  Without this, one would not know what, if anything, is contained on the following pages.  TRIM follows the process of marking the area as free by clearing the invalid data from the drive.  Without this, the process of reading, identifying invalid data, deleting or moving and clearing the block before writing can actually result in performance 4 times slower than it would have normally been as a new drive.

In recently speaking with Kent Smith, Sr. Director of Product Marketing  for SandForce, he identified that there are many variables outside of the hardware that are responsible for users not seeing the benefits of TRIM, the first of which are drivers at the OS level which have to be working optimally in order for TRIM to function correctly.  Another example occurred with early Windows 7 users testing their newly installed drives and not seeing the benefits of TRIM.  Examination of these complaints revealed that users would have originally made the Windows 7 installation on hardware that did not support TRIM and then cloned to the SSD to which TRIM was supported but would not work because of the original configuration settings.  The same could be said of cloning an OS that originally had AHCI turned off followed by a clone to the SSD where TRIM was not being passed, simply because AHCI has to activated for TRIM to function.

In our conversation, we breached the topic of SSD capacity to Mr Smith to which he replied, Are you trying to optimize performance or maximize capacity? which reminded us that the main purpose of the consumers transition to SSD was to maximize their system performance.  Filling a drive to capacity will hinder TRIM and GC ability which will result in performance degradation. Many drives will start to display performance changes once filled to 70% capacity. Testing has shown that the user can very simply add to the drive, especially if it is a 7% over provisioned drive, by reducing the size of the partition, the new unallocated space of which will automatically be picked up as over provisioning and benefit the SSD in many ways.  This idea has been tackled by Fusion IO who includes a utility within their products that allows the user complete control of the size of their over provisioning.

At the end of the day, the end user can hold one final piece of comfort when transitioning to an ssd from a hard drive.  Unlike the hard drive, the ssd does not alert the user of its end life through a typical crash where data can be next to, if not, impossible to retrieve.  The SSD still continues to be a readable resource for data stored, however, cannot write new information to the drive any further.