Toshiba is a world leader in many different technologies and applications.  In the NAND market, for instance, they supply components for some of our favorite SSDs.  But, they haven’t really been known as a major player in turn-key storage products.  While they have an impressive offering of mechanical drives, especially for automotive and industrial uses, they are dwarfed by the duopoly that is Western Digital and Seagate.  For SSDs, they are a major OEM supplier, but don’t have a major presence in the consumer market.  Toshiba is a member of a select group that produces their own NAND.   This puts them in the enviable position where they get to pay cost for the most expensive and important SSD component.  They have the technology and manufacturing capabilities to put them on par with the Samsungs of the world in the SSD market, but that hasn’t seemed to be a priority for them. 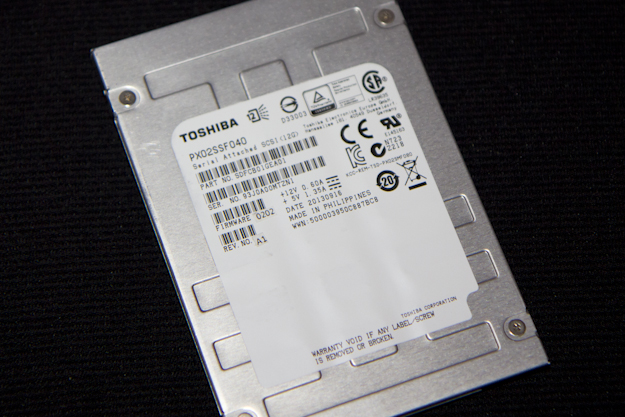 We may never know why Toshiba waited so long to go all in on the SSD market, but we do know that the giant has awoke.  Last month we reviewed the new Toshiba Q Series Pro, which we found to be an excellent value.  Then, just this week, they purchased the charred remains of OCZ for the low, low price of $35M.  This ended the seemingly endless rumors about which company would snatch them up after news of financial woes surfaced.

On the enterprise SSD side, Toshiba has taken a similarly odd approach.  The venerable MKxxx1GRZB and its 32nm SLC NAND is still around for those need and can afford it, but beyond that the options were limited.  Late last year, Toshiba announced one of the very first 12Gbps SAS products, the PX02SM, as part of the PX Series. From there, Toshiba has spent 2013 rounding out their enterprise 12Gbps SAS SSD portfolio. The PX02SM is a high performance high capacity eMLC product, while the recently announced PX03SN is a high capacity, read-intensive MLC-based SSD.  The PX02SS, which we are reviewing today, fills the high endurance, high performance market.

The PX02SS comes in 4 different capacities (100, 200 400 and 800GB) and is priced at $1070, $1815, $3080 and $5925, respectively.  At over $7/GB, the PX02SS definitely commands a premium, but considering its cutting edge 12Gbps interface and high endurance eMLC NAND, it is competitively priced.  Each capacity is available in a standard configuration or with additional security features such as SANITIZE Instant Erase.  Each model draws a healthy 9W of power meaning that you will need provide adequate airflow to keep the drive cool.  The 5 year warranty is fairly standard for SSDs of this class, but is worth mentioning.

When looking at the datasheet, the outstanding read performance is the first thing that jumps out. With 1100MB/s for sequential reads and 130K IOPS for random reads, the PX02SS even tops its PX02SM sibling.  Write operations aren’t nearly as impressive, with only 410MB/s and 42K IOPS for sequential and random performance.  But, as we always say, datasheet specifications don’t always tell the whole story.

With only a handful of 12Gbps SAS SSDs to compare to, we will be focusing on the excellent HGST SSD800MM.  As we have shown over the course of the year, we are quite smitten with that drive.  It delivers performance that is unrivaled for the form factor.  Lets see if the Toshiba can keep up.

The first thing you notice before you even crack open the Toshiba PX02SS is the size.  Unlike the 15mm HGST SSD800MM, the PX02SS looks and feels tiny in its 7mm case.  The Toshiba, at 70g, weighs less than half the HGST (164g).

The thin stamped aluminum case is also a departure from the aluminum block that encases the HGST drive. The case has channels stamped into it that are presumably used for heat dissipation. Instead of large thermal pads covering multiple components, the PX02SS has smaller pads that are dedicated to all of the NAND, DRAM and controller packages.

With the top cover removed, the back of the PCB is exposed showing 8 NAND packages, power loss capacitors and a DRAM package.

On the flip side, we see 8 more NAND packages, power loss capacitors and another DRAM package. Each DRAM package consists of 4Gb (512MB) of DDR3 DRAM from SK Hynix, totaling  1GB.