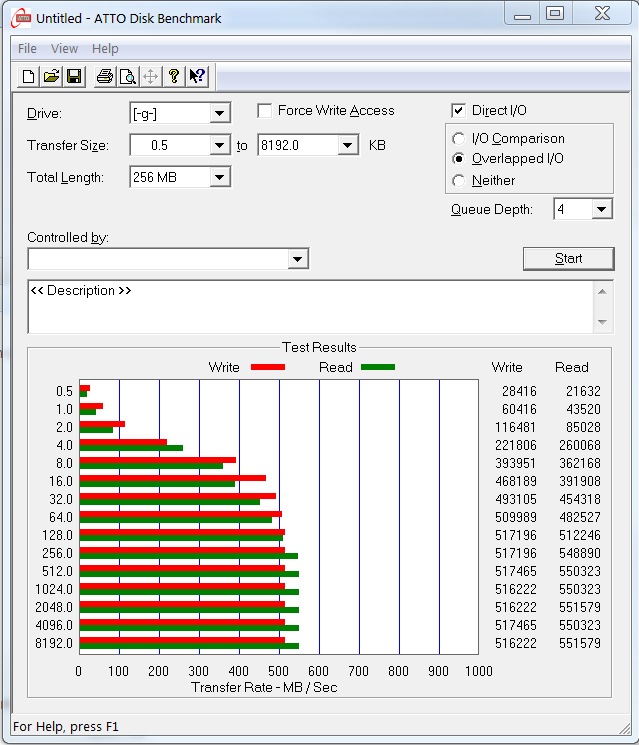 Both ATTO read and write results placed higher than listed specifications of 534MB/s read and 482MB/s write data transfer speeds. Very encouraging is the fact that, even at 4K file size, both read and write performance is already increasing rapidly.

Crystal Disk Benchmark is used to measure read and write performance through sampling of highly compressible data (oFill/1Fill), or random data which is, for the most part, incompressible. Performance is virtually identical, regardless of data sample so we have included only that using random data samples: 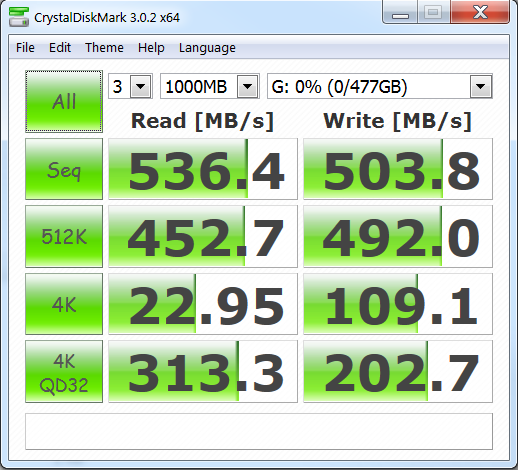 Great high sequential scores are again seen with crystal DiskMark but, even more surprising, is that the low 4K random write score is one of the highest we have seen to date from SSDs. 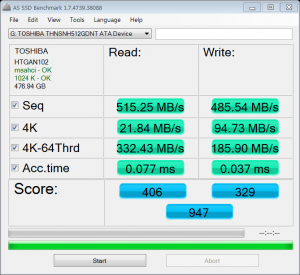 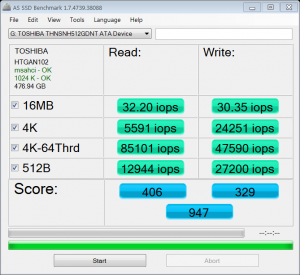 AS SSD provides a first look at 4K IOPS and, while 85101 IOPS is just below the listed spec of 90K. 47590 low 4K write IOPS are well above the listed 35K. Decent SATA 3 results were also seen in the AS SSD Copy Bench result: 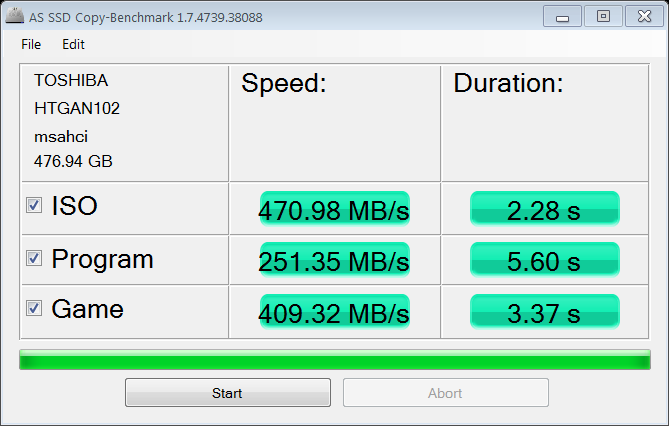 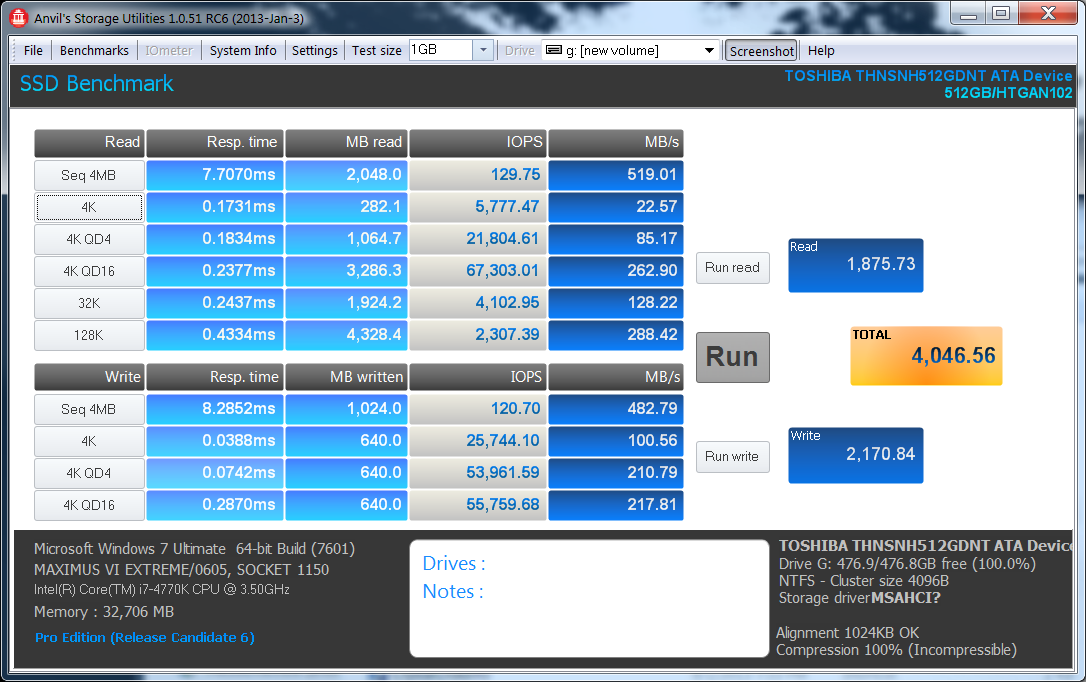 The Total Score of 4046 is an excellent result from Anvil Storage utilities and it is very rare that we see any SSD hit the 100MB/s mark in lo 4K random write testing.

I have to wonder about a few things: 1. Why is SATA3 still used when SATAexpress (12Gbps) is already here? SATA3 has been around for several years and it’s already showing its age…it’s the reason that SSDs are bottle-necked at around 550MB/s. 2. Even when SATA3 makes way for SATAexpress, it will be already outdated, as 12Gbps (1.5GB/s) can already be surpassed by high-end SSD, which can reach over 2.5GB/s. 3. The claim that SATA3 SSD are already fast enough for most consumers is just bullshit. In computers, the name of the game is SPEED. Anyone trying to stop/uphold the… Read more »

What the hell are you talking about? SATA Express is hardly “here”. I’d love for you to show me some laptops that contain SATA Express drives. Yea, didn’t think so.

And SAS? Really? If SAS was going to make it into mainstream computers, it would have happened AGES ago.

As for your shot at this article (and site), you will be hard pressed to find another site dedicated to SSDs with as much history as this forum/blog. PCIe is where it’s at, bro-sees.

SATA express (SATA 3.2) is coming, and I believe will be in consumer machines before the end of this year. My guess is that the only reason for its existence is support for DEV-SLP, which PCIe devices do not support. DEV-SLP is important for laptops where battery life is crucial. I love this site, and fully support it. It brings very interesting information, which is not usually found anywhere else. My wish was simply that manufacturers switch to PCIe 3.0 x4 (or even x8) to enable the full potential of SSDs. The SATA standard is simply getting in the way.… Read more »

“… chasing still unnecessary performance.” Awwww. Eric, that’s so cute. Did you just get your first leapfrog computer? Well, at least you haven’t upgraded to SSD yet. That goes right up there with: “640k memory should be enough for anyone.” Only you actually said it — after it was outdated! I hope you realize that the most constrictive bottleneck in data transfer rates has been the hard drive for a looooong time. That’s why starting a program used to take 20 seconds instead of 2 and why booting used to take 60 seconds instead of 6. Now run along and… Read more »

My bad… Antey, Not Eric. Very sorry for the mixup, Eric.

The last slide is interesting for me in particular, because check out that Plextor M5M beating out everything but the XP941 (no surprise there). When I sold my maxed-out Mac mini, so I could afford my new BTO iMac with PCIe SSD, I was forced to use another mini in the meantime while waiting for its arrival, but I had sold my 250GB 2.5″ Samsung 840 EVO SSD along with it. Luckily, I had already ordered and received an mSATA-to-2.5″ SATA converter, so I took out my 128GB Plextor M5M that I had purchased for caching purposes in my Drobo… Read more »

Where can you buy this? RamCity doesn’t have it :/

Unfortunately I am not aware of anywhere for retail sales. RAMCity would have been my best guess as well. It is a M.2 client (non-retail) SSD.

This is pretty much the best SSD for a Samsung Ativ Book 9 940X3G eh?

Yup…it seems to be a SATA M.2. Availability is the next issue. At retail, I have ONLY seen Intel M.2 SSDs listed on Amazon and Newegg in very small amounts. I might ask RAMCity if they can get you ANY SATA M.2. What exactly are you looking for, simply a larger capacity?

512GB and the fastest possible .. whatever options then can provide would be great… I’m sure all SATA M.2 owners would be interested

This is actually a bit amusing because, when mSATA first came out, i was the first to tell manufacturers to get it out to the retaiul market. Most declined and stated that there was no need for M.2 just yet, failing to think about the millions of Lenovo notebooks that contained them. The result was a vry large shortage of demand where, just like now, you have to keep your eyes open for wherever they pop up fast. I have been watching the 80 and 300GB Intel M.2 530 on Amazon and newegg for a few days and they are… Read more »

When my AB9+ arrives soon its 256GB… so I would need a 512GB to make it worth while… now doing a clone from one to the other is going to be interesting, how to do it