One of the most frequent questions we receive with respect to SSD performance is whether the SSD can perform better than a RAID 0 configuration. We have never seen a single SATA 2.0 SSD perform better than any combinations of SSDs in RAID 0, at least not until we started testing the RunCore Pro V and ran a side by side comparison in Vantage HDD Suite.

This review is going to examine one of the last solid state drives we received in 2010, the RunCore ProV 240GB SSD and before we start, lets have everybody sit down and fasten our seatbelts because this drive flies!

You just might think we saved one of the best reviews until last because of our timing. The test results shown by the RunCore ProV 240GB SSD were such a shock that we elected to do leave the review for the New Year in order to give it the attention it deserves. Not only did it sail past all other single SSDs we have previously tested but, it also exceeded the Vantage HDD Suite results of two brand new Samsung 470 Series 256GB SSDs we had tested in RAID 0.

The RunCore ProV was packaged in typical SSD fashion and the back of the package detailed the drive and we noticed immediately that this company is pushing ahead by including an easy to follow migration kit. It consists of an external SSD case, USB cable and a small screwdriver for assembly. We wondered where the migration CD was and were presently surprised to find it already installed on the SSD itself. 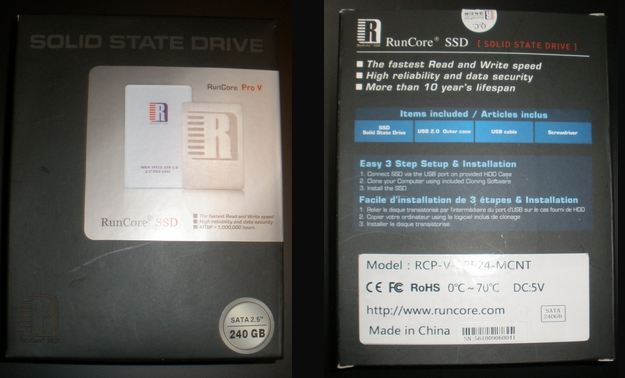 Their instructions were quick and easy where the user simply connects the SSD via the USB port on the SSD case with SSD installed within, clones their system by using the included software on the SSD and then switches the hard drive for SSD. It is nice to see companies catching on to something we have been suggesting for quite some time now. The best transition we can have in moving to SSDs is through simplicity.

We also noticed something on the exterior that caught our attention which was the specification, ‘More than 10 years lifespan‘. Although warranty coverage is two years, this point is valid because, even through heavy consumer use, the typical SSD will easily outlive a hard drive and 10 years is a safe ballpark prediction although it will most likely be much longer.

Another benefit is that, with the SSD, the drive can still be read but not written to at the end of its life span unlike the hard drive which crashes.

The RunCore ProV exterior is a brushed aluminum case with the company logo engraved in the front. The back contained a company sticker identifying the model as RCP-V-S2524-MCNT and contained the drive specifications.