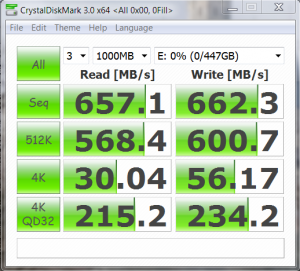 Although there is a visible difference between the sequential and 512k writes when comparing both results, it is not nearly as high as expected and, in fact, we can attribute the relatively high transfer speeds of above 500MB/s, while testing in highly compressible data on the right, to the hard work of the Marvel controller.  In the same respect, the low 4k randoms write performance is a bit lower than expected which, once again, would point to the RAID controller and configuration.  Testing the single blade drive alone would probably display a low 4k result of around 85-90MB/s which has become the norm for similar ‘SandForce Driven’ SF-2281 SSDs.

Up until recently, AS SSD was the only benchmark created specifically for SSD testing and it uses incompressible data.  AS SSD, for the most part, gives us the ‘worst case scenario’ in SSD transfer speeds while using ‘SandForce Driven’ SSDs as they use compression in storage as discussed earlier.  Many enthusiasts like to benchmark with AS SSD for their needs.

Once again, the definite strength we never expected to see lies in the sequential write performance on the left and the achilles heal just might be this 4k score once we test in PCMark Vantage.  This is the first we have seen the IOPS results and, considering that this is a consumer and small business SSD, 73181 write IOPS is nothing to complain about.  Lets see how this translates when moving data:

The AS SSD Copy Bench provides us with the high transfer speed reached and time to move a file from one part of the SSD to another, the three data samples being that of an iso., Program and Game.  The ISO result is the fastest transfer we have seen to date while the transfer of the Program was a bit lower than expected.

We found the results of Anvil Storage Utilities similar to what we have been getting thus far except the high sequential read speed is very low when considering both the listed specifications and previous results we have seen in ATTO, Crystal DiskMark and AS SSD.  It is not abnormal to find the odd compatibility issue when testing newly released technology.