A few days back, an unexpected package arrived at our doorstep via courier; an 8 TB Intel PCIe 4.0 D7-P5510 Data Center SSD. We wanted to throw something out there as a bit of an opener. A bit excited might be an understatement because of its size, speed, and the fact that we haven’t seen an Intel Gen 4 SSD on a Test Bench to date. Fair warning though. This SSD is an enterprise SSD and we have yet to get to any enterprise testing. We just thought a close look at internal components, as well as some of Intel’s first Gen 4 performance benchmarks, were worthy of print…err…post. 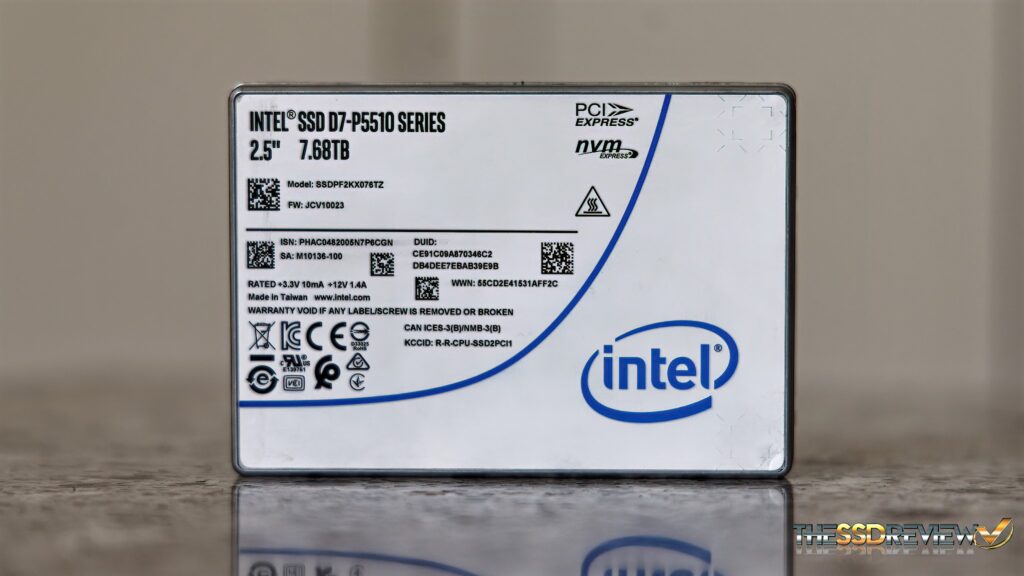 The Intel D7-P5510 is a PCIe 4.0 x 4 SSD and uses the NVMe 1.3 protocol. It is available only in a U2 15mm for factor and in capacities of 3.84TB and 7.68TB, the latter of which we are testing today. The D7-P5510 is a data center SSD that offers optimized performance with low latency, enhanced management capabilities, scalability and a critical NVMe feature set for enterprise and cloud applications. Just as a quick example, unlike any SSD we have worked with before, completing a Secure Erase or a TRIM command with the D7-P5510 takes only a few seconds. This runs right in line with Intel’s claim that “the TRIM process is improved with reduced write amplification that helps drives meet their endurance goal.”

As with other Intel Data Center SSDs, the D7-P5510 is set into a thick cast two piece housing for optimum heat dissipation. It is a notebook SSD size but 1/2″ thick. The chart below lists performance variables between the two capacities of the D7-P5510, as well as running a full comparison to the previous generation D7-P5500. If it appears a bit hard to read, click on the chart for a much larger version:

The D7-P5510 is built on Intel’s proprietary EAX 34144 NVMe SSD controller, has 16 pieces of Intel’s latest 144-Layer 3D TLC NAND flash memory, along with 6 pieces of Micron DDR4 DRAM cache. The product sheet for this DRAM can be found here.

Something that we don’t often see is the mixing of different NAND packages in the same SSD. You might notice two different product numbers when you examine the front and back of this SSD, 29F04T2ANCQKI and 29F08T2AOCQKI.

For device monitoring and updating, Intel Memory and Storage Tool, along with Intel’s NVMe driver, is available free of charge here, This is the GUI identification of our D7-P5510:

Incidentally, the features in this software include Drive Summary, Drive Details, Diagnostic Scan, Firmware Update, SSD Optimizer and the fastest Secure Erase we have ever used.

So who is the Intel D7-P5510 destined for? Although it is suitable for data center and cloud based applications, we expect that it will be considered a viable option for small business and up. We are already starting to see the D7-P5510 advertised for sale in regular e-tailer websites, something you wouldn’t traditionally see for a data center only SSD. We are finding very reasonable advanced pricing of $791US for the 3.84GB version, so let’s just wait and see what pricing may come. Check Amazon.