Thunderbolt 3 has been around for some time now and, as bumpy of a start as it initially seemed to have had, it seems to be fitting quite well in today’s world of anything media.  With 40Gbps bi-directional travel that for some odd reason is limited to 2.8GB/s throughput, there are just so many other things that come along with Thunderbolt 3 to include amazing video configurations, daisy chaining up to 6 devices and even powering your laptops and devices through the Thunderbolt 3 device itself.  Don’t get me wrong; that 2.8GB/s throughput is absolute gold in the world of media manipulation. 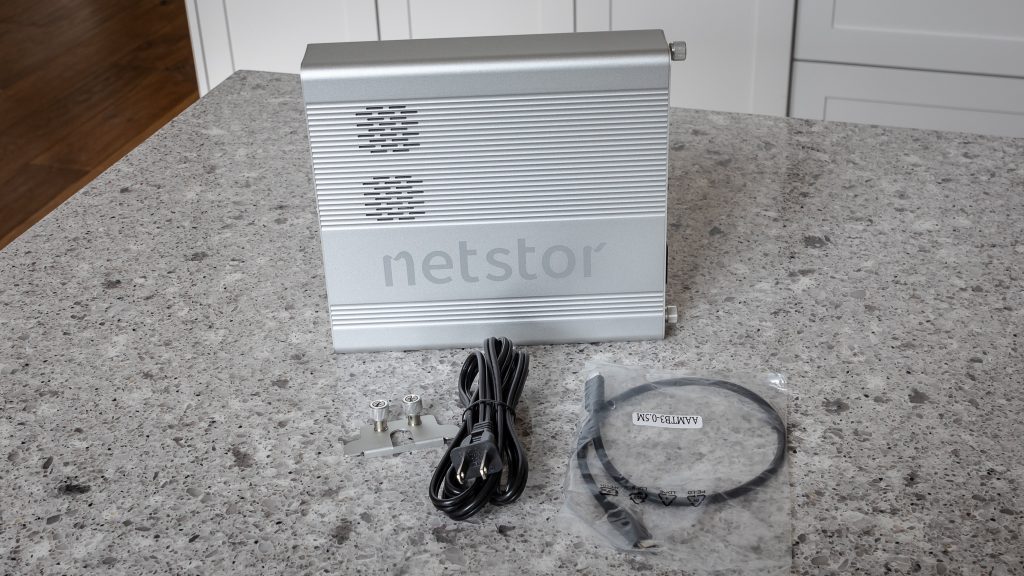 Today we are testing something rather unique.  It’s a first in the area of Thunderbolt 3 with respect to more than one of its features.  This is the Netstor NA622TB3 and we are rather fortunate to have one sent to us ahead of North American sales.  It is constructed of aluminum, has an integrated 120W power supply, comes with a .5m Type-C cable.  It also has 15W power delivery through its Type-C port which will power a laptop or other similar device.

The Netstor NA622TB3 will accommodate up to 4 SSDs and enables configuration of the unit as a JBOD, one or two logical RAID volumes that can be setup in RAID 0/1, or a simple 4 SSD RAID 0 configuration.  As we know, the overhead for Thunderbolt 3 limits throughput to 2.8GB/s so that is the highest one will reach in two or four RAID SSD configurations, the benefit of course being the larger volume availability.  This device is fully capable of housing 8TB of storage.

The implementation of the Broadcom PEX 8714 PCIe switch allows these storage configurations in what is believed to be a first for any similar device on the market.  This Broadcom chip does limit single SSD performance to 1.6GB/s which is about 1/2 of our sample SSDs read performance specifications, however a very respectful speed considering the overall design at hand.

On the front of the Netstor NA622TB3 we have a power switch, an LED that will be blue when powered on and orange on standbye, as well as four white LEDS, one for each SSD, that flash white when NVMe disk activity is occurring.

On the back we have the power cable, a three speed selector for the two internal fans, as well as two Thunderbolt 3 ports. One of the strong suits of Thunderbolt 3 is its ability to connect up to 6 Thunderbolt 3 devices in tandem.

Something we really liked with respect to this device was that we could create two separate OS soft RAID volumes and use them concurrently through the single cable.  Something we didn’t expect was that both volumes would work at full Thunderbolt 3 speeds concurrently as a result of the PCIe switch.  These tests ran side by side for each RAID volume of two SSDs:

We would never have expected that considering that 2.8GB/s overhead limits both single devices.  Netstor provides a 2-year warranty for the NA622TB3.