Two of the best things seen in recent external SSDS are the inclusion of SuperSpeed, along with the obvious massive reduction in size.  Just yesterday we posted a report of the EDGE diskGO SuperSpeed USB 3.0 flash drive where speeds of 449MB/s and 428MB/s were realized from a device the same size as a matchbox.  Like the MyDigitalSSD OTG (On The Go) Pocket SSD we are reviewing today, the diskGO is UASP compliant with SuperSpeed, requires no external power other than the USB cable, and both qualify as being two of the smallest and fastest performing storage devices we have had in our hands yet. 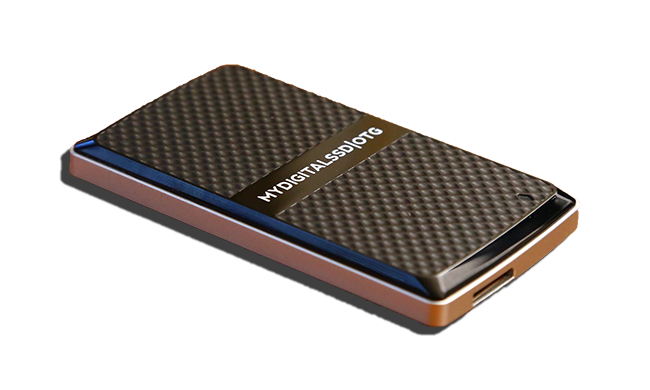 For those just starting to look at the performance of flash drives and external SSDs, a quick test of the OTG in USB 2.0 results in a top performance of 43MB/s, while USB 3.0 boosts that to 335MB/s, or roughly just under 8x faster.  Now, when we kick in the same drive with SuperSpeed, the speed jumps to 441MB/s, or 10x faster than that same device using 2.0.  How does this translate into moving files?  Just to establish our point, we moved a 9GB Blu-ray movie in USB 2.0, USB 3.0 and then USB 3.0 SuperSpeed.  USB 2.0 took 3 min 49 sec, USB 3.0 took 31sec and then SuperSpeed cut that time even further to 24 seconds . That was a Blu-ray film; it took only 3 seconds to move a HD movie.

The MyDigitalSSDOTG Pocket SSD is available in capacities of 64, 128 and 256GB, the latter of which we are testing today.  The OTG is UASP compliant and it is worthy of mention that, to get SuperSpeed performance, the system that you are plugging the OTG into must also be UASP compliant.

The OTG is fully backward compatible to USB 2.0 and works with all Windows versions, Mac OSX and Linux. Performance for all capacities is listed at 465MB/s read and 450MB/s write and it comes standard with a 3 year warranty.

Checking out pricing at Amazon

The OTG is constructed of a plastic, but solid, shell which protects both a PCB and mSATA SSD.

The PCB contains an ASMedia 1053 chip which bridges the SATA host controller to SuperSpeed USB 3.0, as well as a SATA 3 connector for the SSD itself.

The PCB fits into place through a simple connector, while the mSATA SSD is held down be two Phillips screws.  Once the SSD is removed, the PCB can be lifted and pulled back for removal.

The SSD is a mSATA SSD and contains the SATA 3 Phison PS3108-S8 eight channel controller, along with 4 modules of Toshiba 19nm mlc NAND flash memory. The maximum performance listed by Phison for this controller is 520MB/s read and 480MB/s write.

As this SSD is a 256GB capacity, each memory module would have to be 64GB in size.  Once the MyDigitalSSD OTG SuperSpeed Pocket SSD is formatted, the total available storage available to the user is a bit less, at 223GB.