The competition between value based SSDs is getting ever more fierce this holiday season. Comparing back to just a few weeks ago we see most manufacturers offering great prices to entice more sales before year’s end. Building upon this steam is MyDigitalSSD with their latest model, the BP5e Slim 7 Series. BP5e stands for Bullet Proof 5 Eco, which is the latest variant of their Bullet Proof SSD products. We reviewed its predecessor, the BP4, back in 2013, so it has been quite a while since we’ve seen one of their 2.5″ SATA SSDs. The BP5e Slim 7 Series is a new SSD developed to deliver, as MyDigitalSSD states, an unequaled price to performance ratio. 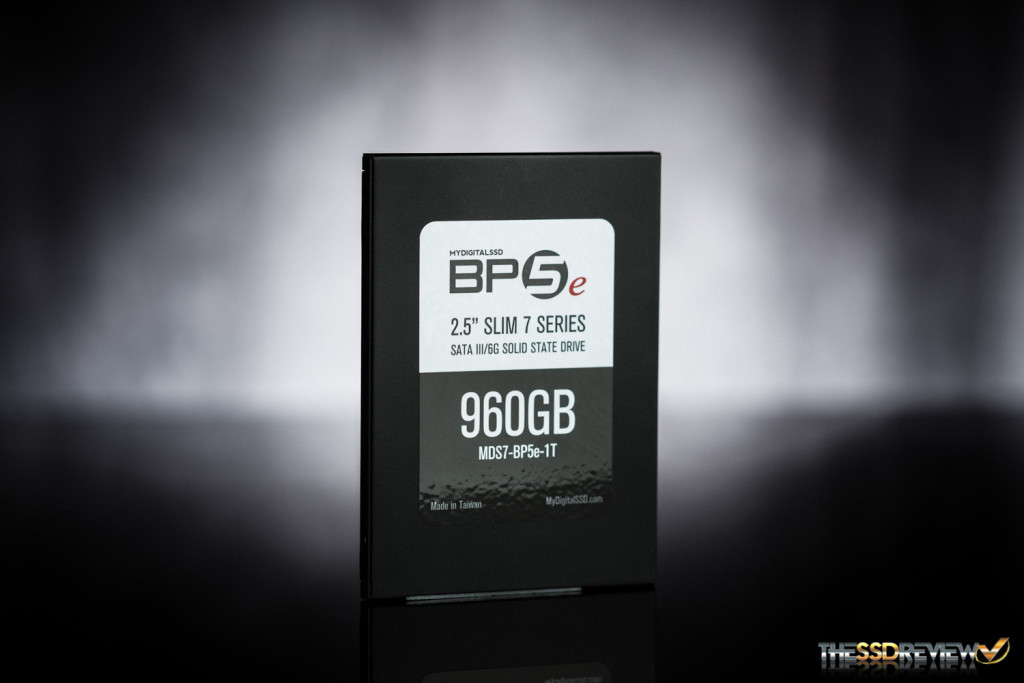 In order to achieve this MyDigitalSSD threw together Phison’s S10 controller and Toshiba’s TLC Toggle 2.0 NAND to make for a very competitive product. With sequential figures reaching well over 500MB/s for both read and write as well as prices that are just $0.25 per GB, the BP5e Slim 7 Series is already looking good. Let’s jump into the specs to learn more about it.

Standard features such as TRIM, NCQ, SMART, and power management are supported as well as RAID. Other than that, the feature list falls a bit short. AES encryption support is NOT listed, nor is DevSleep, and it doesn’t have any sort of migration software or SSD Toolbox like some of the big name brands give out. This is a bare-bones product, however, the prices reflect this.

Following a white and purple color scheme, the packaging displays the SSD on both the front and back. The speeds and capacity are displayed clearly. You can even connect with them on Twitter, as can be seen on the front of the packaging.

Inside the package is just the SSD. It has a matte black finish and a black and white label on the front with the capacity and model number.

A CLOSER LOOK INSIDE

The SSD’s enclosure is a snap case design rather than a screw type, thus one way they can save on material cost during production and pass those savings onto the end consumer. There is also no thermal pad to help aid heat dissipation from the controller.

The actual PCB is a compact 3/4 length reference design that is similar to other Phison S10 powered SSDs. The Phison S10 controller is a fairly capable controller being that it is a quad-core, 8-channel design. We thought that they would have opted for a lower tiered chip such as the S8 or S9 for this product, however, being that they are wanting to deliver some of the best performance they can while utilizing cheaper TLC NAND, it seems best that they chose this one over others.

Along with the controller, there are four Toshiba TLC Toggle 2.0 NAND packages on each side as well as two DRAM packages, again, one on each side. Each NAND package is 128GiB in capacity and once the SSD is formatted the usable capacity is 894GB. Both of the DDR3L SDRAM packages are 512MB in capacity, which provides for a total of 1GB of cache.
Pages: 1 2 3 4 5 6
6gb/s BP5e MyDigitalSSD SATA Silicon Motion Slim 7 Series SM2256 TLC Toshiba Toggle TLC 2015-12-18
Sean Webster