Our SSD analysis today looks at the Micron RealSSD P400e SATA 3 enterprise SSD, a new entry with a new approach to integrating SSDs into the entry-level enterprise tier.

The enterprise SSD market is segmenting into several layers that suit very different needs, and this entry level MLC based SSD looks to grab the mainstream customer market. Upper-echelon ultra high performance SSDs can command prices that are very prohibitive for the entry level crowd, and this is the void that the P400e looks to fill. 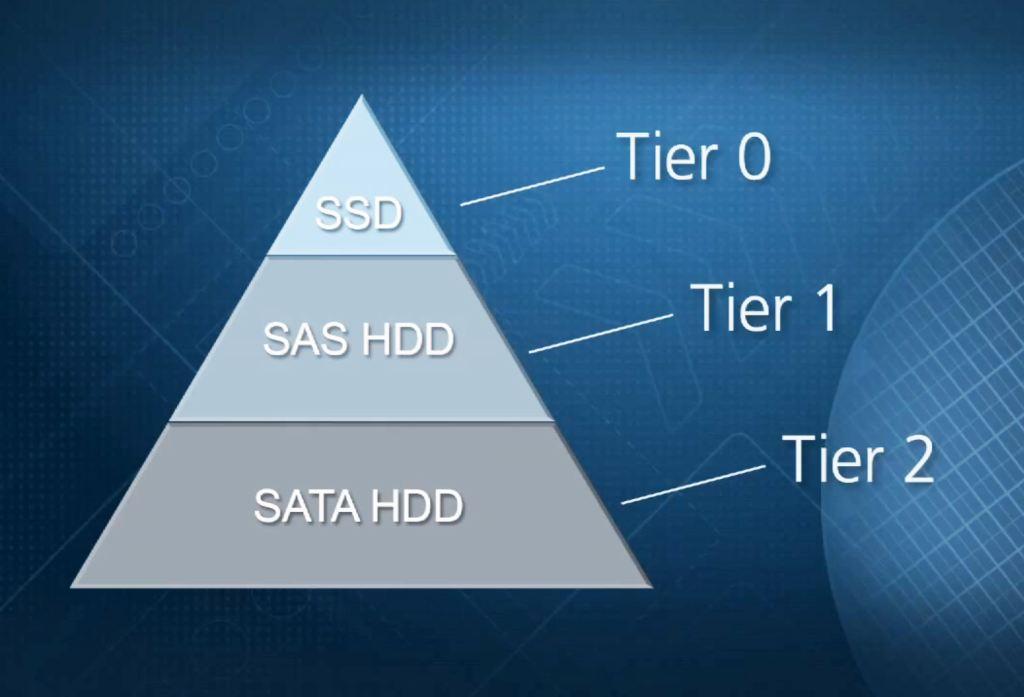 First and foremost, the enterprise backbone consists of HDDs, and that scenario isn’t likely to change. With the cost per GB advantage that HDDs enjoy, it will be several years before SSDs can begin to challenge them for bulk storage. There are several layers of HDDs that can be utilized, and they are separated into different classes, depending upon the speed of the device and interface. The graphic to the left shows that the SAS HDDs enjoy a tier above the SATA HDDs, as their performance and feature set is much more advanced. SSDs reside at the highest level, being the premium storage tier.

The Solid State Storage landscape is populated with a range of devices that are beginning to fall into several categories, dividing this upper SSD tier into several distinct layers as well. Micron has begun to address each of these levels with products that address the needs of the respective markets. At the top of the pyramid the P320h offers the highest performance, with the highest price to match. This ultra-high performance PCIe controller is geared for the most demanding of scenarios.

The next level of Mainstream performance is addressed with the standard 2.5″ form factor P300 SAS/SATA SSD. With high endurance SLC NAND used for the SSD, it enjoys higher performance and also a higher price point than standard SSDs.

This brings us to this lower tier, which is expanding at a much faster pace than the others. This branch of the enterprise SSD market consists of entry-level users and boot drives. The main consideration is that this cost-sensitive tier needs easy to deploy devices that have high data integrity requirements. As with any enterprise storage application, reliability and data security trump high performance.

The Micron RealSSD P400e looks to address this entry level tier of users. Micron has taken a long look at this market segment, and noticed that many of these users are utilizing standard consumer-class SSDs in their applications. This can leave users exposed to data loss and lower endurance that these devices can suffer from.

The P400e is designed for environments that are very high in read activity, and also leverages expanded 0ver-provisioning to increase the endurance of the NAND used. Inside of every SSD there are SRAM, buffers, and other areas of volatile memory that can introduce errors. The P400E utilizes expanded data path protection that ensures the validity of the data as it travels through the device. Enhanced ECC and CRC parity algorithms also within the firmware provide RAID-like redundancy and data security.

The IMFT 25nm MLC flash lends itself to lower cost structures, which is another key to this price sensitive segment of the market. These SSDs are designed primarily as drop-in replacements for HDDs, and the savings that customers can enjoy with the much lower overall Total Cost of Ownership (TCO) are significant.

The P400e SSD sports a 6 GB/s interface connected to a Marvell 9174 controller. The Marvell controllers are time tested in the enterprise arena, and are a solid bet for Micron. With the advantage of a slim 2.5″ 7mm profile, this SSD can easily be deployed into a wide range of environments. Sporting an impressive 50,ooo read IOPS and 7000 write IOPS, with a sequential read and write weighing in at 350/140 MB/s respectively, these Micron SSDs are poised to address the entry level market.