Kingston HyperX Predator M.2 PCIe SSDs in RAID 0 – You Thought One Was Fast?

More M.2 PCIe SSDs are starting to hit the consumer marketplace. Not only do they offer a compact form factor builds and mobile platforms, but they also provide speeds that demolish their SATA based competition. If you have read our exclusive HyperX Predator review you already know that this M.2 PCIe SSD is pretty darn fast as it is rated for up to 1.4GB/s read and 1GB/s write! Quite impressive right? Now ask yourself, what could be better than one HyperX Predator? Well, how about two?!? Luckily for you we just happen to have another here today and we will be taking a look at just how fast we can push them in RAID 0! 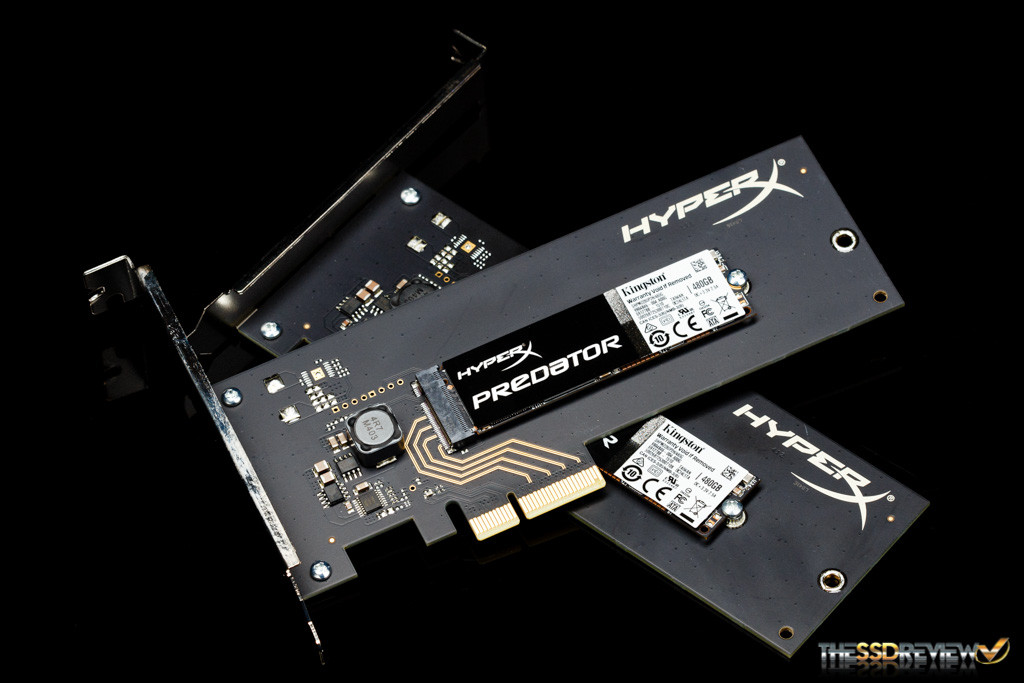 We have already gone over the specs in our previous review, but we will reiterate them here as well. The Kingston HyperX Predator is an M.2 PCIe 2.0 x4 SSD. This enables it to achieve speeds that are up to three times faster than typical SATA based SSDs at 1.4GB/s read and 1GB/s write. In terms of IOPS it is rated for up 120K/78K IOPS read/write, but can achieve up to 160K/119K IOPS read and write.

One of the most notable features of this drive, besides its shear speed, is that it is rated for up to 882TB of writes for the 480GB model. While we have slowly been seeing an increase in endurance for newer SSDs, this simply tops all. On the other hand, it is only warrantied for three years. So there is a tradeoff.  Oh, and before we forget, yes, the HyperX Predator is bootable as it has the boot ROM code on the M.2 SSD itself and should work with older non UEFI systems.

Taking a closer look at the HyperX Predator M.2 PCIe SSD stick it is hard to think that something so small can output such fast speeds. It wasn’t too long ago that you needed multiple controllers and a huge PCB with lots of NAND packages to achieve the speeds that these SSDs reach. We can see that overall there are just eight NAND packages as well as two DRAM chips on the double sided M.2 stick.

Powering this SSD is Marvell’s PCIe 88SS9293 controller. It is a PCIe 2.0 x4 controller that we should be seeing more of once more PCIe SSDs hit the market. From our testing we found that without additional cooling it shouldn’t overheat and throttle during normal desktop workloads, even when disconnected from the HHHL adapter.

Kingston have decided to utilize Toshiba’s A19 Toggle NAND for best performance. Each of the eight NAND packages are 64GB in capacity providing 512GB of RAW capacity. Once formatted a single 480GB is 447GB while our two SSDs in RAID 0 total 894GB. Finally, the DRAM used is Kingston’s very own DDR3-1600 low voltage chips, each 512MB in capacity for a total of 1GB.

The protocol for our testing follows as we have done in the past. We are simply going to set both HyperX Predator M.2 PCIe SSDs in a software RAID 0 configuration and test. The RAID 0 volume was quick and easy to set up within Windows via Disk Management. Just right click one of the empty drives and select “New Striped Volume…” and follow the on screen steps. That’s all there is to it!