It has been almost a year since Crucial/Micron introduced their new M500 family and, with that, came the news of what we then termed as a new Crucial M500 NGFF SSD that would be introduced to retail consumers.  Today, many are now searching for high-capacity M.2 SSDs both for their purchase and upgrade of new M.2 SSD contained systems, and as a replacement to current systems containing M.2 SSDs.  There are absolutely no M.2 retail SSDs available for purchase as we write this report, however, our receipt and review of the first Crucial M500 M.2 SSD just may signal change in the very near future. 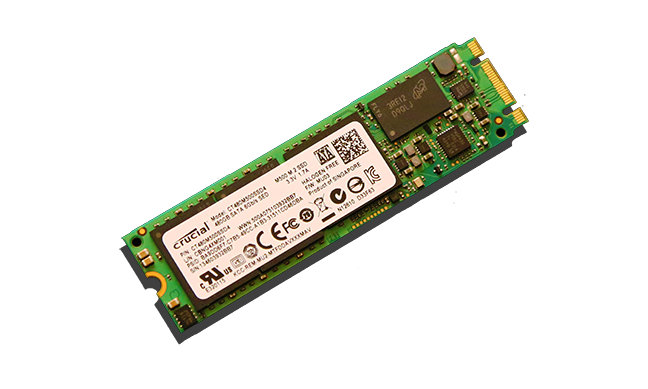 The Crucial M500 is a SATA 3 M.2 SSD and we might predict that its pricing will be similar to that of regular notebook SSDs, however we have yet to receive confirmation and availability dates from Crucial/Micron.  For those new to the M.2 form factor, we have learned through our past few reports that many configurations of M.2 SSDs will avail themselves soon enough.  Taking just a quick look at the M.2 SSDs we have on hand, we see a large number of configurations that are being introduced. 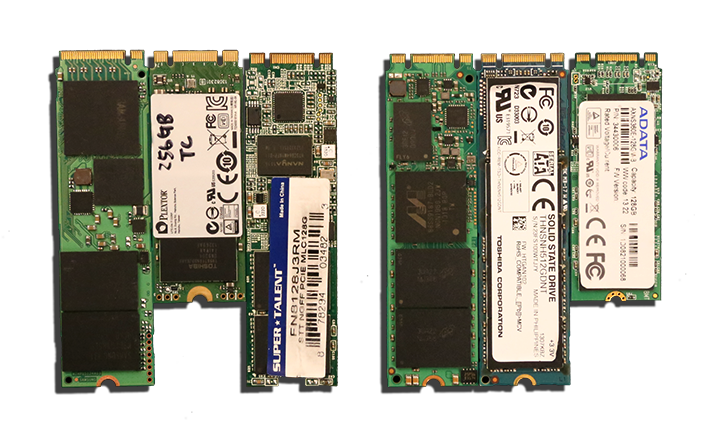 From left to right, we have the Samsung XP941 PCIe X4 m.2 SSD, capable of up to 1.2GB/s performance.  It utilizes four PCIe lanes, whereas the Plextor M6e M.2 SSD to its right is a PCIe X2 SSD, uses two lanes and is capable of just over half the performance at about 730MB/s.  Unlike all other SSDs to date, the M6e M.2SSD that we have contains its own boot files and is capable of being the boot drive in present PC systems, whereas the Samsung XP941 is not.

The Super Talent PCIe DX1 M.2 SSD to the right of the Plextor only uses a single PCIe lane and is also bootable.  Interestingly enough, this SSD is, in fact, a SATA 3 SSD which runs through PCIe lanes and not the SATA port.  To the right of the STT PCIe DX1, we have the Crucial M500, Toshiba HG5d and ADATA AXNS360 M.2 SATA 3 SSDs, all of which use the motherboards SATA ports and are fully bootable, just as any other storage medium connected to ones motherboard.

Specifications for the crucial M500 family are the same, regardless of form factor and all M500 SSDs come with a 3 year warranty. 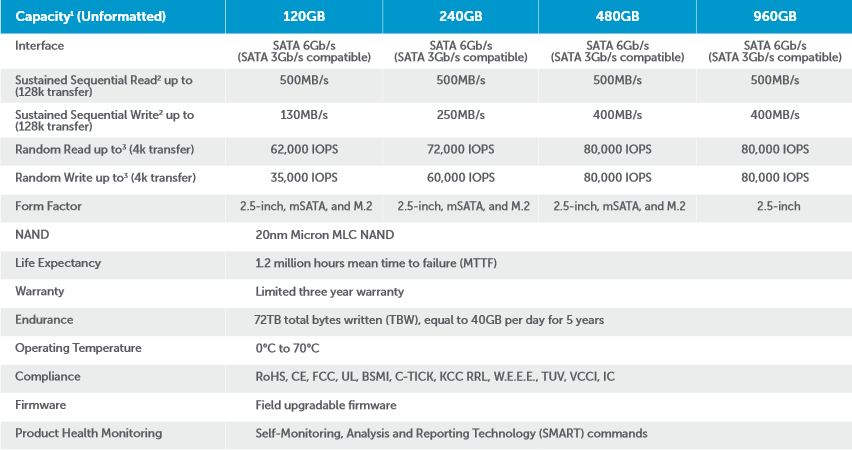 Crucial has been a long time fan of Marvell controllers and this SSD is no different.  Front and center on the top of the PCB is tha Marvell 88SS9187 eight channel SATA 3 controller that we have seen previously in SSD reviews of SanDisk, Plextor as well as crucial/Micron. 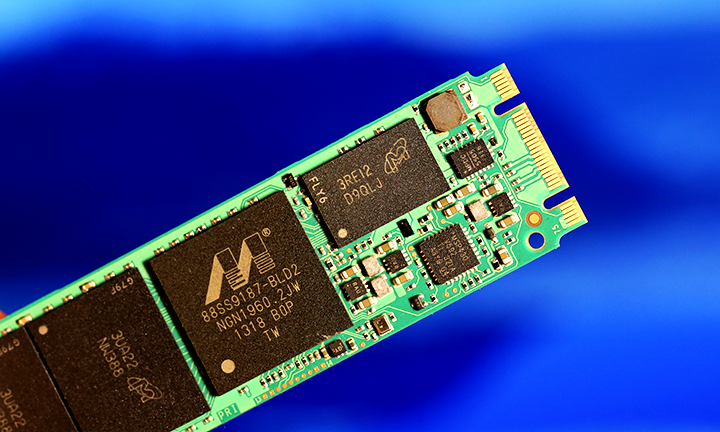 To the right is a Micron 256Mb DRAM cache memory chip and there also four modules of Micron NAND flash memory that we haven’t seen prior in any SSDs.  They are first gen 1Tb density modules and each has a capacity of 128GB. 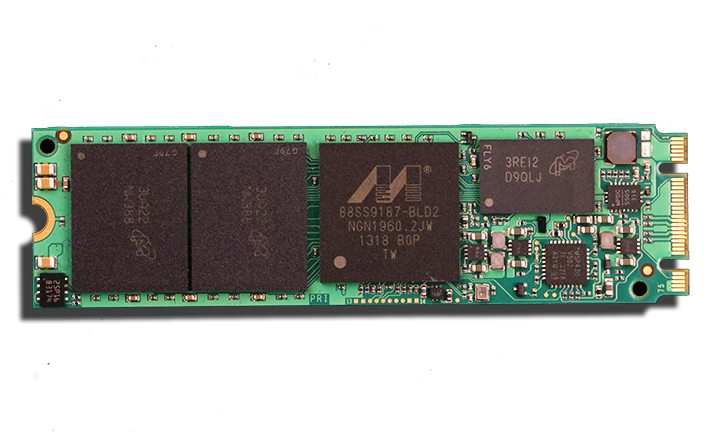 The memory has a FBGA code of NW388 which, when entered into the FBGA decoder,  returns with a product number of MT29F1T08CUCABH8-10:A. You are not likely to learn anything about this memory from the present Micron charts as they have yet to be updated but we were able to break the product number down as such. 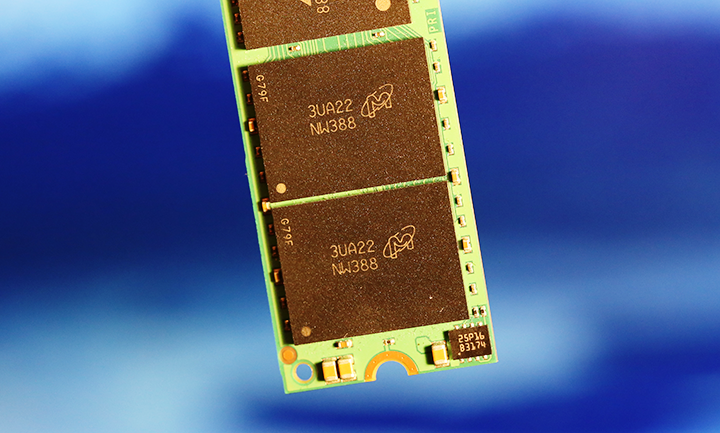 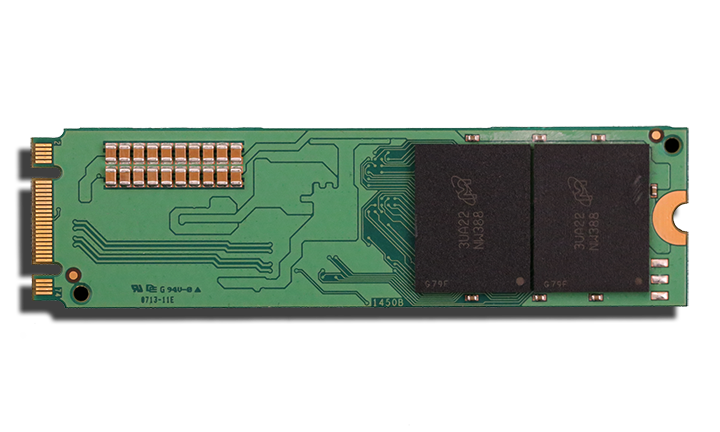 On the back of the Crucial M500 M.2 SSD os something never seen on consumer SSDs.  These are 20 modules of power capacitors that ensures that all information in the cache completes its travel to the memory, should a power loss occur.  These are standard in al Crucial m500 SSDs and definitely a reason to consider the m500 above the rest if data loss is a major concern. 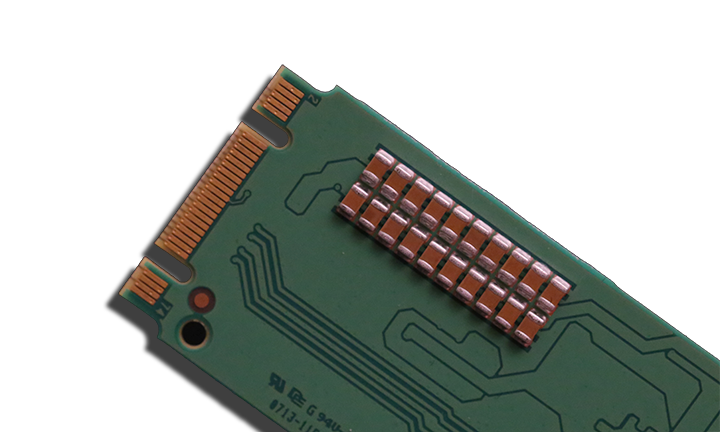