Without a doubt, the toughest lesson learned on release of the Canon EOS R5 Mirrorless camera was that of storage and this relatively new thing called sustained write performance.  Countless people purchased these cameras, along with first generation CFExpress Type B cards that had not been approved by Canon.  They quickly learned that features that should be available within their camera settings just weren’t there, features such as 4/8K video RAW recording.  Yet others experienced things such as cards that weren’t recognized, cards that froze during specific video recording…or others that stuttered.  Extreme heat was also common with first generation cards, the user learning the hard way while trying to remove cards immediately, cards that might typically be as high as 85°C.

The solution for this has recently been brought forward by the Compact Flash Association and is called ‘VPG 400’ where accredited CFExpress B cards are guaranteed to have a minimum sustained write performance of 400MB/s, a level of performance guaranteed to ensure ones new digital camera works as it should.  This accreditation tackled the issues we had described above as some first generation CFExpress Type B cards were found to have sustained write speeds at or under 300MB/s, the cause of missing video features within the R5 specifically.  VPG400 does not tackle card temperature but, at least from what we have tested, manufacturers have brought card temperatures down significantly as CFExpress B has matured. 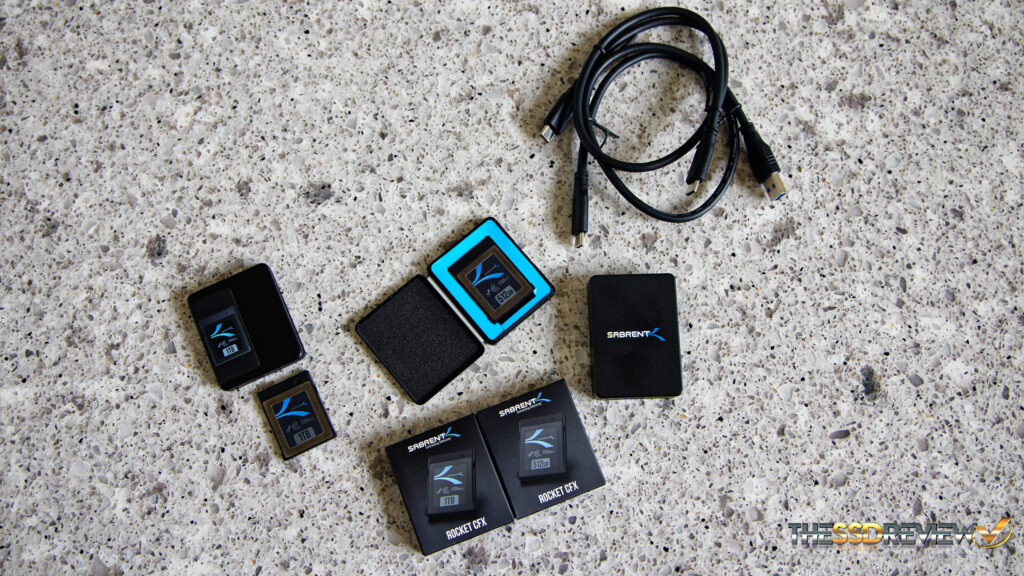 On the Test Bench today we have the brand new release of the Sabrent Rocket CFExpress B 512GB and 1TB cards, along with their newest CFExpress Type B card reader.  Sabrent specs speak to 1700MB/s read and 1500MB/s write on a PCIe 3.0 x2 interface with up to a 3W power draw and up to 400MB/s sustained write performance .

As has become the norm with Sabrent, their newest Rocket CFX CFExpress Type B cards are packaged in a well built black aluminum shell with a magnetic enclosure inside cardboard packaging of the same size, the overall package being 2 1/4″ x 1 7/8″ x 3/8″ thick. These cards have high endurance through LDPC, RAID ECC, end to end data protection, over-provisioning, static and dynamic wear leveling , SmartRefresh and defect management. They have a standard 1-year warranty applies which can be upgraded to 3-years with product registration.

Pricing for the Sabrent Rocket CFX CFExpress memory cards at Amazon right now is $489 US (1TB) and $339 (512GB) which is amongst the lowest we have seen for a quality brand name card.  Naturally, our curiosity lies in things such as sustained write performance and file transfer comparison as we now have the newest VPG400 accreditation, yet we have also seen CFExpress cards reach sustained write performance just under 1500MB/s.

CFExpress Card testing at TSSDR differs slightly, depending on whether we are looking at consumer or enterprise storage media. For our Sabrent Rocket CFX Type B Card testing today, our goal is to test in a system that has been optimized with our SSD Optimization Guide.

For our testing today, we will be relying on the pictured PCIe 3.0 x4 CFExpress reader created for us by Lexar some time ago.  As a bit of confirmation, we always test with multiple readers we have on hand and of both the ThunderBolt 3 and the newer USB 3.2 2×2 spec.  There shouldn’t be a difference in any of these devices as the top speed of CFExpress is well below the threshold of all readers ( and our AIC Gen 3 reader), whether they be Thunderbolt 3/4 with a threshold of 2.8GB/s or USB 3.2 2×2 with a top speed of 2GB/s.

In addition, we have also tested the Sabrent cards with Sabrent’s newest CFExpress USB 3.2 10Gbps Card Reader to confirm top speeds of 1GB/s as shown in this CDM result. Checking Amazon, we see this device listed at $56.99.