It’s not every day that we see an SSD that makes us stop and think.  After our trip to Computex, we were able to take delivery of something that is fairly unique in terms of enterprise storage.  The ALLONE Cloud Disk Drive 101 RAMDisk is not your normal SSD, in fact, it really isn’t an SSD at all. Technically speaking, it is a battery backed, PCIe-based RAM disk.  RAM disks are nothing new. They have been around as long as we can remember. 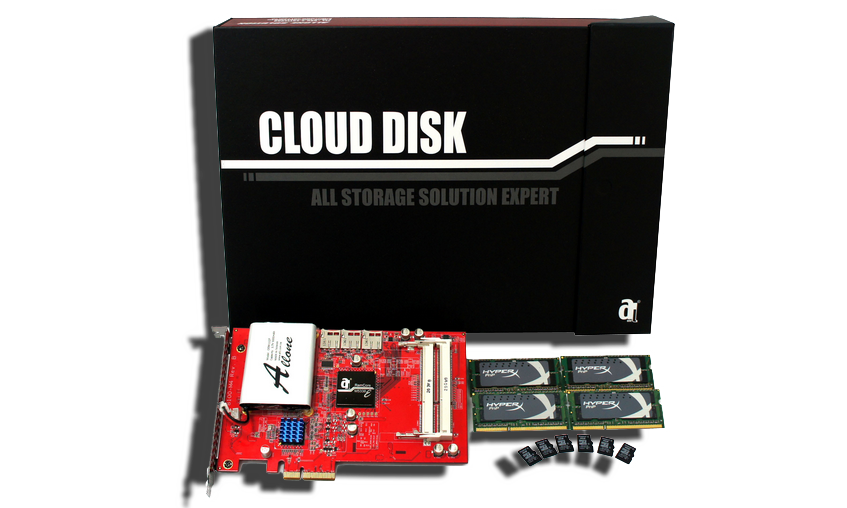 The intent is to, through software, take a portion of system memory and present it to the OS as a storage device.  By doing this, you create a tiered storage solution where you can cache frequently used data and access it at DRAM speed.  They were more popular at a time where storage was painfully slow when compared to CPUs and RAM.  With SSDs, specifically PCIe SSDs, storage speed has increased to a point where storage is less of a bottleneck, but it is still nowhere near the speed of system memory.

The issue with traditional RAM disks is that they are volatile.  When power is removed, the data on them disappears.  They also take up valuable system memory and bandwidth.  One solution is to take the DRAM off of the memory bus and put it on a PCIe add-in card, which exactly is what ALLONE has done.

Now, this is not a new idea.  There have been multiple companies over the years that have tried, unsuccessfully, to push this type of product to market.  For the most part, those products still used a SATA interface, which greatly limited the effectiveness of the solution. The DDRDrive X1, ACard’s ANS-9010 and Gigabyte’s i-RAM are all examples of solutions that failed to gain acceptance.  ALLONE hopes their Cloud Disk Drive 101 offers performance that can’t be overlooked.

The Cloud Disk Drive 101 comes in two flavors.  Today we are reviewing the Storage Turbo, which comes equipped with 32GB of capacity in the form of 4 Kingston DDR3 modules.  Those modules are backed up with a 3000mA battery backup.  In case of power loss, the DRAM is backed by 6 Kingston microSD cards, for a total of 48GB.  The Cache Pro solution is similar, but lacks the SD backup capabilities and has lower overall performance.

Random performance is impressive at nearly half a million IOPS, but that is at 512 bytes.  We are used to random performance rated at 4KB workloads, so we will have to see how the Cloud Disk Drive 101 handles larger workloads.  The sequential numbers are a bit low, but considering the PCIe x4 Gen 1 interface, which has a real-world bandwidth of 800-900MB/s, it is not surprising.

There are a few advantages that this type of architecture has that typical SSD don’t.  The first, and by far the most important, is write endurance.  Even the very best SSDs on the market have a finite life based on bytes written.  The Cloud Disk Drive 101 has no such limitation.  Theoretically, DRAM has infinite write endurance.  As a caching solution, you will never have to worry about the type of workload.

Secondly, the Cloud Disk Drive has a very low power consumption.  Typically, products that produce this level of performance are PCIe devices that can consume upwards of 25W.  At slightly over 7W of active power draw, the IOPS/W ratio is excellent.

But, all of this comes at a price.  The Storage Turbo will retail for $15,000 while the Cache Pro is $6,000.  Those prices will be hard to swallow for consumers.  What remains to be seen is whether enterprise customers can see value in this solution.