The search for fast, cheap, reliable and large capacity Hard Disk Drives seems to be never ending. Enter Samsung with their new EcoGreen 54EG 2TB Series of hard drives and we get a fresh look at something newer, faster, quieter and requiring less power than other hard drives in todays fast moving world of storage.

With contenders such as Seagate, Western Digital and many others vying for top spot in the uber competitive HDD market, Samsung improves upon the reliability of the F3EG model to introduce the new 5400 RPM EcoGreen F4EG, a hard drive that we believe just may grab the Crown with its combination of price, performance and capacity.

Todays review will focus on the performance of a single F4EG, and the benefits of placing them in a RAID array. With 5400 RPM drives being a bit slower, quieter and a better value than their 7200 rpm counterparts, many have chosen these drives in RAID configurations for maximum performance at a great price point. We will focus on the benefits of this type of array using the four drives and hope to demonstrate the amazing performance in RAID 0 (stripe size of 128) of these drives.

Samsung has made some marked improvements to this series of EcoGreen HDD in the F4EG. The F3EG had four platters whereas the F4EG sports three platters with an incredible areal density of 667GB contained on each platter. We can see that the big increases in density allow for fewer platters which equates to better performance and lower power requirements than Samsungs competitors. As a result the F4EG easily outpaces its rivals in many categories and we see that the performance gleaned from the higher densities helps the 5400 rpm class of drives immensely. This, combined with the Advanced Format Technology, allows for much higher capacities at lower price points.  Advanced Format Technology changes the base formatting of 512 bytes per sector to 4k per sector. A big plus to the evolution of this newer form of formatting is increased data integrity and larger capacities. 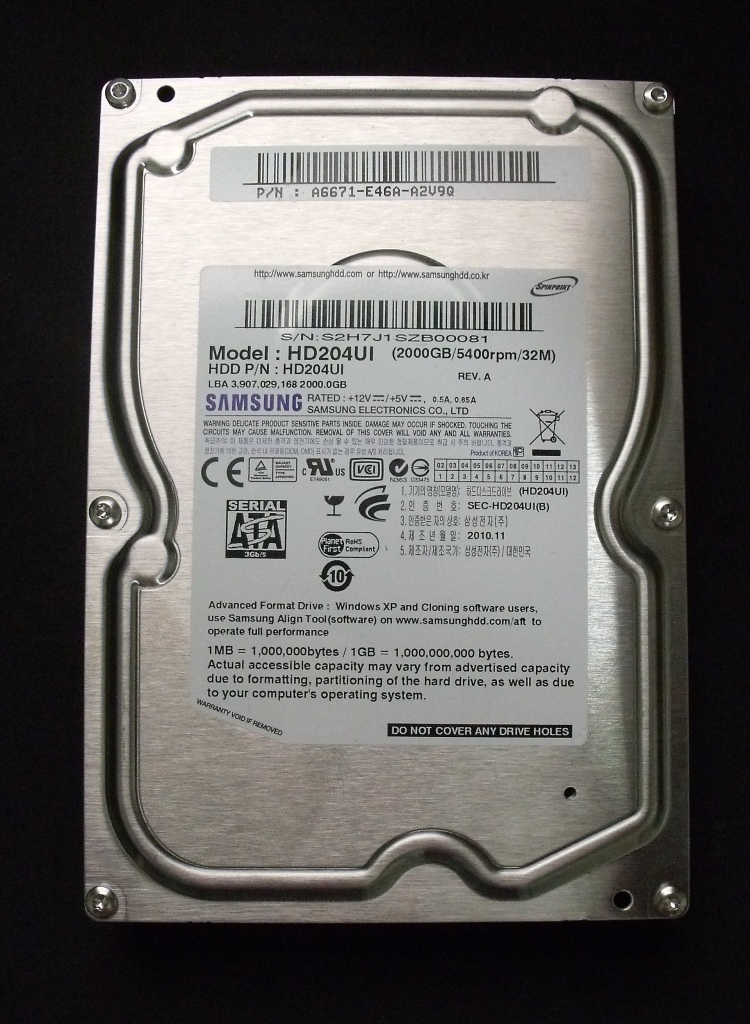 The appearance of the drives themselves is rather unremarkable as it follows the normal look and approach to external design of a hard disk drive.

The drives follow the standard 3.5 inch form factor and measure 4 inches wide, 5.79 inches long, with a depth of 1.03 inches and weigh roughly 1.5 pounds.

One area where the SpinPoint F4EG does vary from its competitors is the design of the PCB on the bottom of the device itself. Usually the drive controllers are placed facing into the drive itself whereas this drive has the control chips facing outwards.  This may help thermally with heat dissipation as it would allows the chips to be exposed to the air inside the enclosure that they are placed in, however, none of these chips will produce much heat, as they are definitely geared towards low power usage. To the rear of the device you can see the standard SATA power and data ports that one would use to connect to the computer.