Great relationships can lead to great things.  In the past few months, there have been a few companies who have stated their intention to market the holy grail of portable storage; a 1TB microSDXC card.  So far though… nada.  Well…at least until earlier today when a totally unexpected package arrived via courier.  It was a small package…very small in fact.  it hasn’t been mentioned anywhere and it is nowhere to be found on the ‘net. We think that it just may be the first 1TB microSDXC out of manufacturers hands.  Introducing the Lexar High-Professional 633x 1TB microSDXC card. 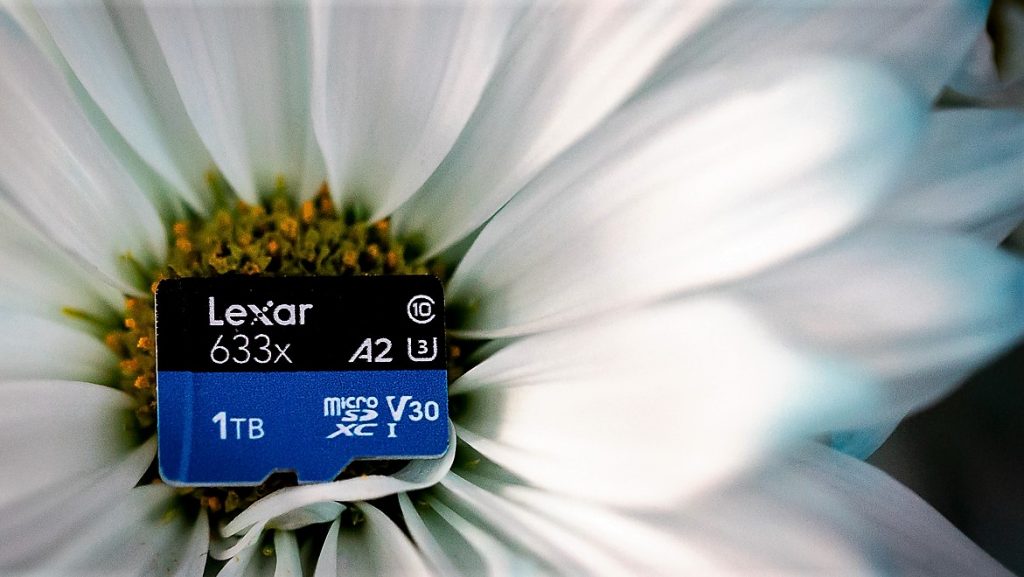 Admittedly this first picture is just a bit creative, and deservedly so as spring has finally hit our office in Northern Canada.  It does a very good job of showing just how truly small this card really is.  Now imagine… This card will hold 17,000 hrs of music, 2000 hrs (or 80 days) of video, 620,000 photos or 1,000 movies…and it is smaller than the tip of your index finger.

The Lexar 633x has the newest A2 designation in the Application Performance Class which means it has a minimum random read of 4000IOPS, minimum random write of 2000IOPS and minimum sustained sequential write of 10MB/s, this also being confirmed by its Class 10 designation.  As well, it is capable of UHS and the newest Video Class of a minimum 30MB/s.

As it stands right now, this is a prototype card but if it were to be marketed, we think it would fall right in line with the 512GB version that is capable of up to 100MB/s transfer speeds, is ideal for tablets, sports cameras and smartphones and can be utilized for capturing and playing back 1080p full-HD, 3D and 4K media.  Of course this would no doubt come with a limited lifetime warranty as many other Lexar products do.  For now though, we will be seeing it released in the Asias first most likely.

What totally shocked us, however, was that the Lexar 1TB High-Performance 633x SDXC Card fits our Samsung Galaxy Note 8 smartphone like a glove, all storage being fully recognized to 1TB, and it tests pretty well as shown in our AndroBench here.  Admittedly, this is a bit low so let’s check it our as we might normally do on our Test Bench.

Our initial ATTO results are very strong as we see a steady progression as sample sizes increase and results are as expected at 97MB/s read and 86MB/s write.