Making our way over to the Phison booth we were greeted with some new products. First up is the S11T, which will help OEMs and other customers reduce their BOM cost. It is an industrial grade SATA 6Gb/s controller that is DRAM-less. It supports MLC/TLC 2D and 3D NAND. It features their SmartECC, end-to-end data path protection, and SmartZip technologies. Read and write speeds are rated for up to 550/500MB/s and 100K/85K IOPS read/write. Whether it is used for in client applications or in embedded systems, this controller is a great solution. 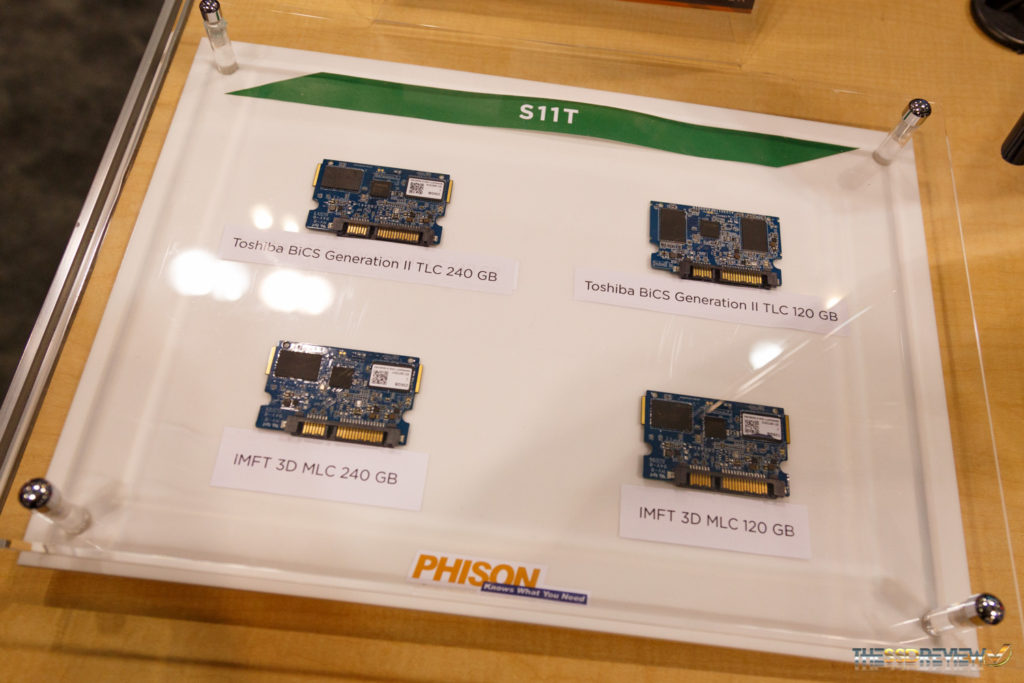 Next up was their new E8 controller. Phison’s goal with this controller is to offer three times the performance of SATA at the same cost. By utilizing a PCIe 3.0×2 NVMe interface it is capable of speeds up to 1800MB/s read and 1300MB/s write. Random performance is rated for up to 240K/220K read and write. It supports both MLC and TLC in 2D and 2D flavors. SmartECC, end to end data path protection and HMB (or host memory buffer) are supported.

With this controller there are two models, the normal E8, which utilizes DRAM and the E8T, which is a DRAM-less design. There is a trade off going DRAM-less however.

The E8T’s performance suffers slighly at 1600MB/s read and 1300MB/s write and is rated for up to 120K/130K IOPS read and write. For most applications, however, these speeds are more than enough and don’t risk data loss due to issues from random power loss that its DRAM counterpart could encounter.

Other than that they had on display some of the industrial applications their controllers are commonly used for. Their controllers offer high reliability and their tools help developers validate with ease. From digital signage to aviation use, Phison have a diverse market share and are continuing to push as they crate new products for their customers. Be sure to continue following us as we wander about FMS!