So I originally started this upgrade on the advise of a peer who sold me on the fact that new Z370 PC builds were a natural for the Intel Optane SSD, displaying significantly faster startups, shutdowns and typical PC tasks.  He never lied. The difference is not just visible; it is significant. 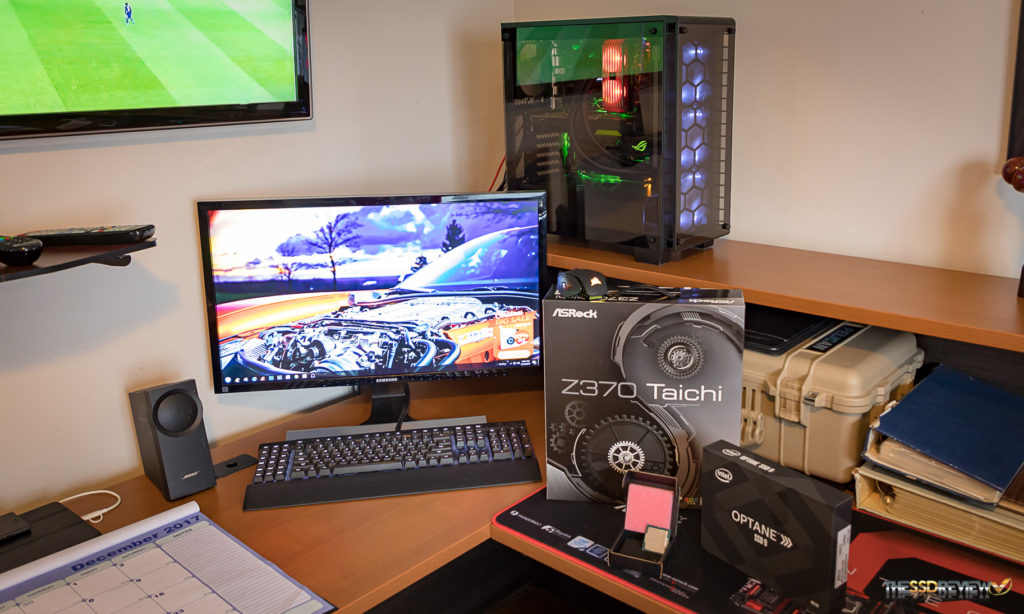 As with most things, however, I have always found it hard to color between the lines.  I had to dig deeper and see what I could do and, in doing so, I discovered not only the perfect PC pairing, but also, the simplest 5Ghz ‘STABLE’ overclock there is….and it is only two steps.

Meet the ASRock Z370 Taichi motherboard, Intel Core i7-8700K CPU and Intel SSD9 Optane 480GB SSD.  If you are looking for a Christmas present, this is heaven.  Not only does it start in eight seconds and shut down in less than two, It provides an observable speed increase in typical Windows operations and runs VERY comfortable at 5GHz.  Just to get you set up a bit, this video will validate everything we just stated…. as well as the secret settings (Only two!) to this build:

Before we jump into the build, I’d like to acknowledge Intel, ASRock, Corsair, Kingston and PNY for their continued support in our climb to create bigger and better builds.

This Z370 build is now running very comfortably with the Intel Core i7-8700K CPU at 5Ghz, has a massive 64GB of Kingston predator DDR4-3000 memory running at spec, and starts in about 8 seconds with the worlds fastest SSD, The Intel Optane.

Let’s take a closer look at the components and ensure that any component choice you make in result of this report…is the right choice.