Intel announced a new Optane SSD code named ‘Alderstream’ this week in Seoul and performance specs shown by Chief Optane Architect and Intel Fellow Frank Hady were no less than amazing. Yes, Frank has an elusive ‘Alderstream’ Optane SSD in his hands in this picture but it would have taken quick thinking to have grabbed a picture of it. Not only does the Alderstream Optane have a 50x lower failure rate than 3D NAND, but also, it triples the TPS rate compared to the current Optane on the market today. 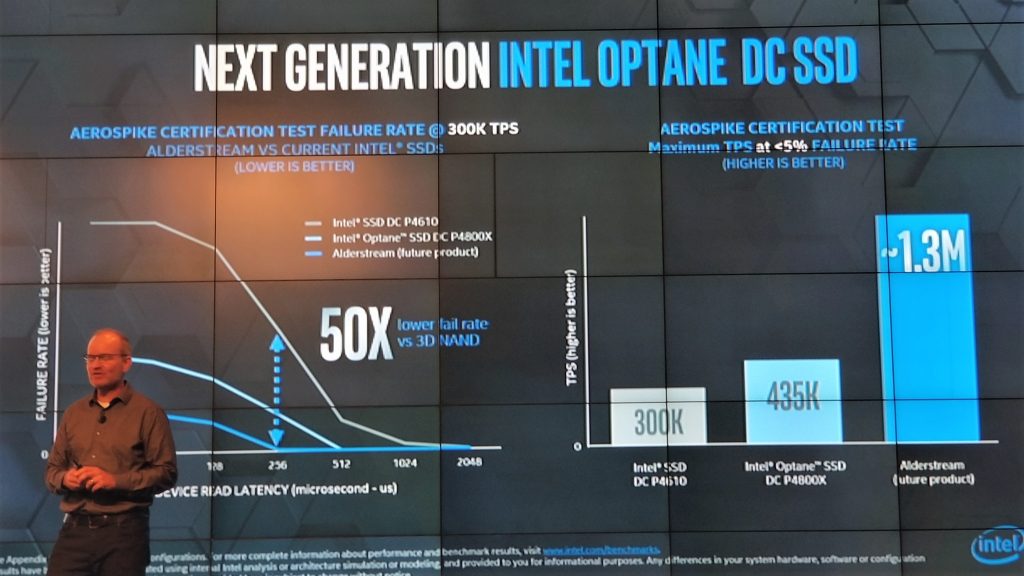 That is not the highlight though… When comparing this SSD to Intel’s P4610 and P4800, both have a breaking point whereas the Alderstream holds the same latency and runs right off the chart passing the 800,000 IOPS mark.  This is going to be one impressive SSD. 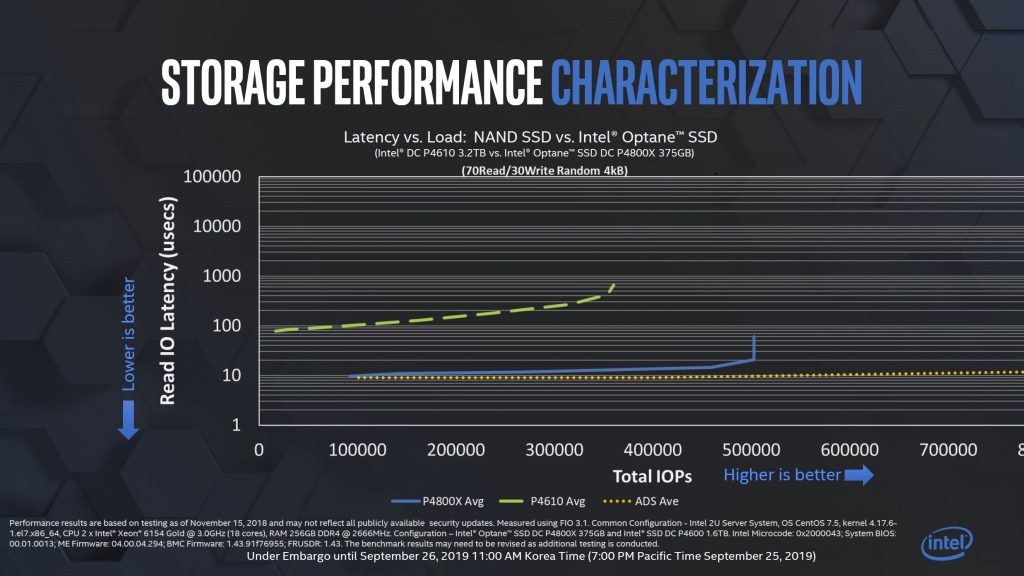 The Intel 665P consumer SSD is an upgrade from the 660P and was the first we have seen Intel demonstrate their 96-layer QLC 3D NAND flash memory.  This picture shows the 660P atop the newer 665P.  Intel’s demonstration showed Crystal DiskMark high sequentials to average 1.3GB/s for the 660 while the newer 665P jumped to 1.8GB/s. 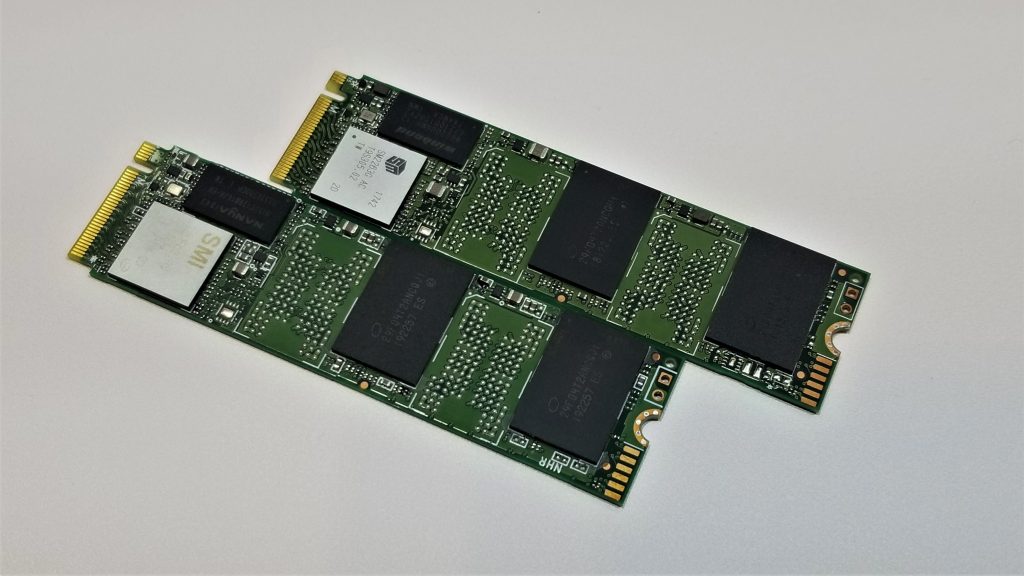 Intel envisions the 665P to be a low cost high performing replacement for the hard drive and are the first to say that it is aiming at the new user demographics; those just moving over from the hard drive.  Understanding that this SSD is aimed at the consumer and not more difficult media manipulation is very important.  Newer SSDs all have an SLC cache that assists in write performance.  Once that cache is filled when moving data, performance drops significantly until the cache is cleared once again.  While this isn’t typically even noticed by most consumers, it can become a real bottleneck for those working in media.  There is a definite plus to Intel’s newest QLC, however, and that is the fact that they have increased the size of there SLC cache significantly and it is also dynamic. 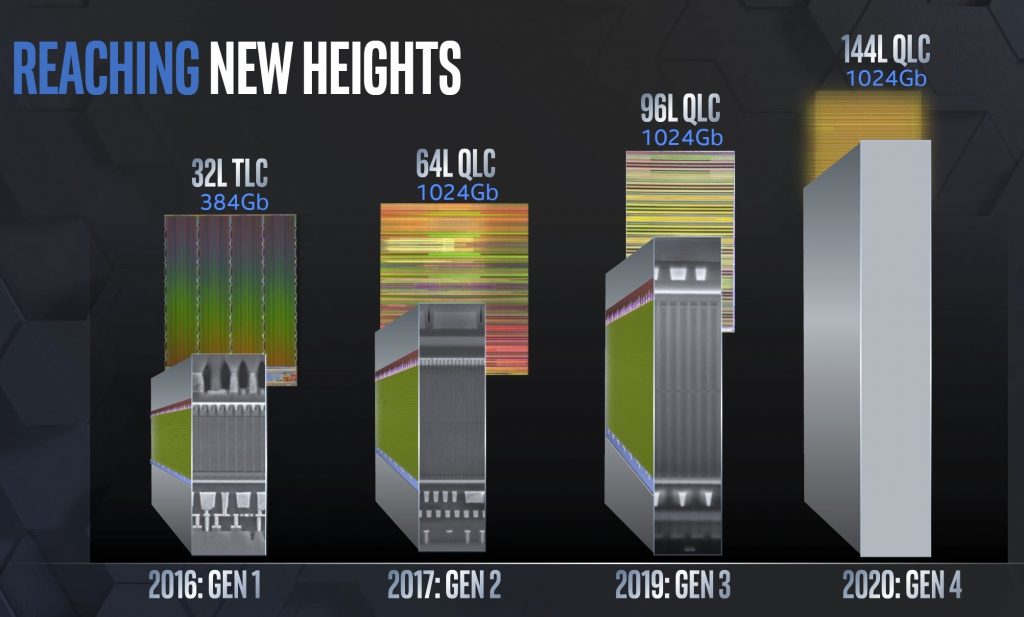 This chart shows that Intel is hoping for a quick transition from the Gen 3 96-Layer QLC to the 144-layer; a single year in fact.  Intel is rather enthusiastic about the fact that they are going to be marketing 144-layer QLC with their floating gate cell technology while others are at the 128-Layer level.  This could give Intel the foot-up in high density value oriented SSDs. 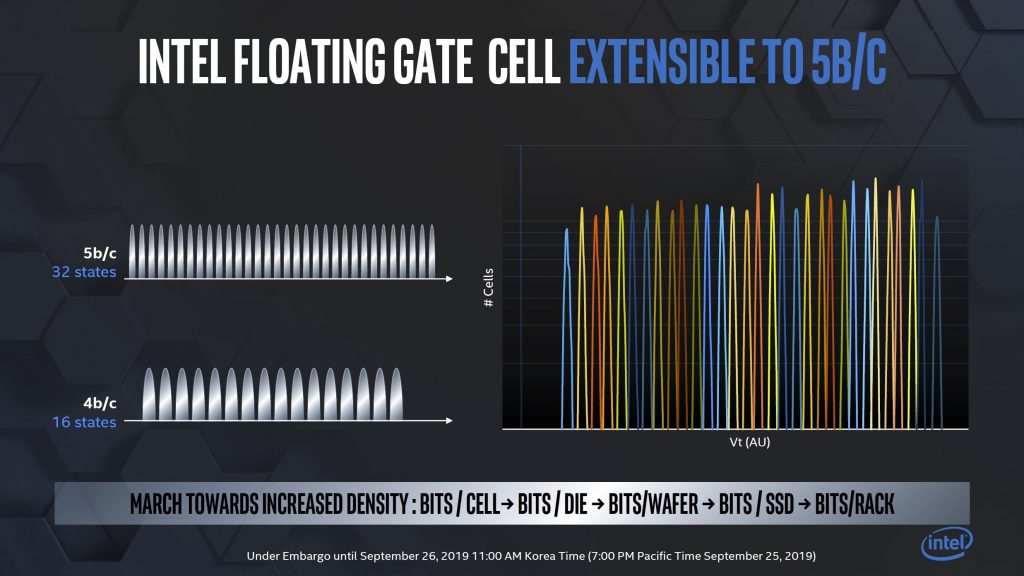 Les, you reviewed a similar product from another company about a year or so ago. Never heard anything after that about the company or product in the tech rags. Is this concept just a solution in search of a problem?