For quite some time, the thought of a full size touch screen monitor has recurred in build considerations as it just seems that ‘touch’ can make things faster and more enjoyable.

Having watch closely over the past few years, there seem to have been many trial and error lessons learned and only after our visit to Computex did a touchscreen become a serious consideration.

We owe a bit of a thank you to Gigabyte for that.

It seems that Gigabyte has moved forward with “Touch Bios” in their new motherboards and what better way to demonstrate but on the Dell ST2220T 21.5″ Touch Screen Monitor.  We were hooked. Well… if the truth be told, I was hooked and my lovely Associate Editor beside me stood there shaking her head and thinking , “Not again”. I will be the first to admit that my expertise (if we can call it that) lies in the realm of solid state drives but every now and then something comes along that I just have to put to print. 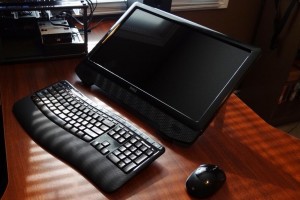 This is the case with the Dell ST2220T 21.5″ Touch Screen Monitor simply because it makes things quicker, simpler and a much more enjoyable experience than a mouse alone.  Would I be wrong not to do a review and give proper thanks to Dell for introducing me to my new addiction?

The Dell ST2220T 21.5″ Touch Screen Monitor is available at Dell and priced at $329.99 which is less than we expected.  Its screen uses IPS technology and and optical touch can be used to move around your OS environment just as you would on any tablet.  The user can use their hand or a stylus or pointing device to move around the screen and maximum resolution is 1920 x 1080 with over 16 colors available in colour depth.  Touch response is listed as 15ms and the ST2220T fully supports Windows 7 multi-touch gestures. Windows 7 was built for this Touch Screen!

From left to right, there are 3 USB 2.0 ports on the left side followed by power, DVI, HDMI, serial, sound and the USB connector that enables multi touch when connected to your computer.

We took the time to play with sound through the built in speakers but which were sufficient but not quite what one is looking for in music or game use.  The speakers can be found on the bottom of the monitor where the monitor base also becomes visible.

From a personal standpoint, the screen was a simple plug and play with no more than power, monitor plug in and connection of the USB to which Windows 7 took care of the rest.

Once the drivers and software were downloaded a simple program was available on the taskbar which helped learn and even customize gestures for our own use.

Preset gestures that helped us right off included scroll up, copy, scroll forward, paste, scroll down, undo, scroll back and delete.

Pen (or finger) options included actions for single, double tap and press and hold and sensitivity is fully adjustable for hand use or pointer.

An on screen keyboard, is also included and this monitor is fully compatible with handwriting and even provides for automatic recognition of your own style.