Virident’s FlashMax 2 Displays PCIe With Up to 2.2TB of Flash in a Half-Height Form Factor

Virident’s PCIe solutions helped make their name in the enterprise space, but the company is hoping to build on it’s past success with the FlashMax 2. With a new PCIe 2.0 interface and up to 2.2TB of capacity, Virident is hoping to take the fight to the FusionIOs and LSI’s of the world.

In addition to the dual strategy of more and faster, Virident Systems is pushing virtualization support for ESXi and and VDI. Though everyone is focusing on virtual environments these days, the FM2 is specifically touting performance that can help remove unwanted congestion from too many users booting and logging on virtual desktops. Explicit support for VMWare’s ESXi is important in this sector, and getting more performance and capacity per machine can help shift the value equation in Virident’s favor.

Planning virtual desktop deployments is notoriously tricky as is, but when they’re backed by large quantities of mechanical storage, cost and performance can often move in opposite directions. Modern desktop operating systems are usually pretty effective at utilizing available IOPS, and lots of users getting their clients up in the morning can heavily tax a virtual desktop server. Much of the performance equation is comprised of faster storage which can lower the cost per desktop, since fewer resources are needed to serve up more desktops effectively. PCIe flash may be expensive per GB, but is far cheaper per IOP when compared to high end serial attached SCSI spinners, all while using far less power in the process. 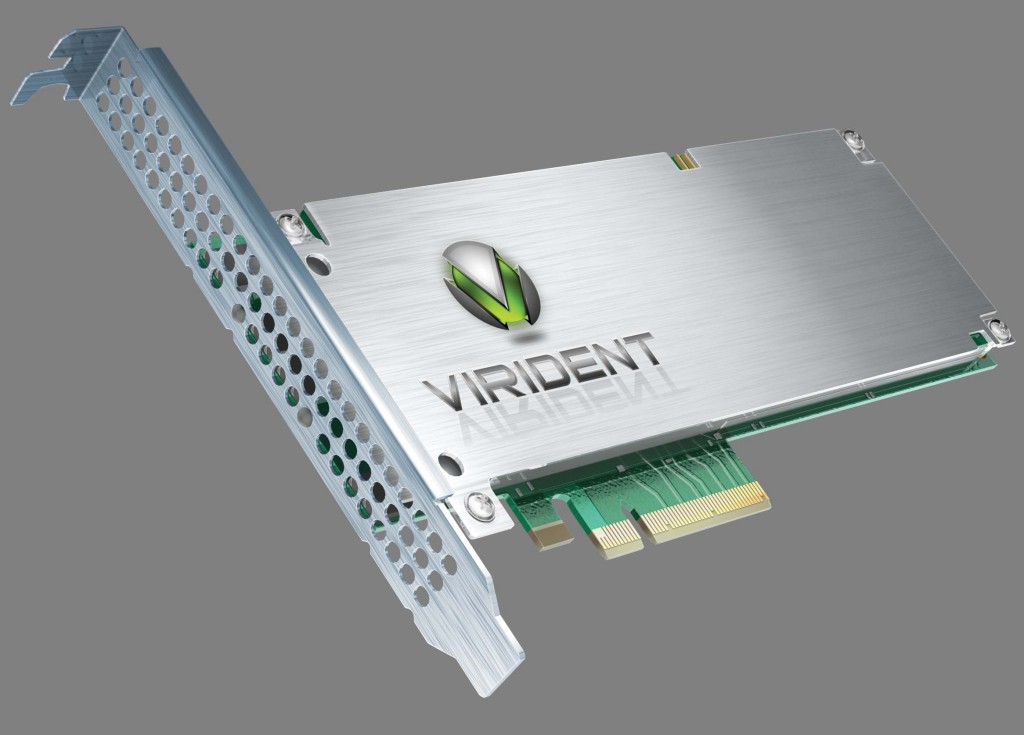 The FlashMax 2 is planned for availability in September, with SLC and MLC solutions ranging in capacity from 550GB to 2.2TB in a half height PCIe form factor. The NAND is organized RAID-style to keep the device trucking after a flash device failure, while global wear leveling will help maximize endurance. Most solid state storage products only do wear leveling on a local device level where real world loads can create hot spots which can kill flash quicker. The ability to wear level across all NAND is a definite advantage over traditional wear leveling, and is especially helpful for MLC which needs all the help it can get in hard enterprise use.

Gen 3 PCIe might be here now, but it will be some time before PCIe flash devices get full-on Gen 3 performance. The Gen 2 x8 FlashMax 2 is good for “up to” 1 million IOPS in some configurations, which is just now what a single card is able to manage on x8 over Gen 2 lanes. Virident is focusing on prolonged performance with less variability than competing products and consistently low latency as requests stack up.

The PCIe storage sector is becoming a (admittedly large) shark tank from a competition perspective, but it’s hard to see Virident failing after their success to date and support from key partners. Virident Systems is supported by investments from Intel and Cisco in addition to venture capital from Artiman Ventures, Globespan Partners, and Sequoia capital. With Intel, Micron, OCZ, LSI, and FusionIO all taking bites out of the market, Virident is optimistic that it can get to the next level of success with FlashMax II.

Pricing starts at $6000, coming in under $11/GB for higher-capacity MLC versions.

can you use it as a boot drive?