Texas Memory Systems has announced the release of their RamSan-70 PCIe SSD. The RamSan-70 will employ the use of up to 900 GB of SLC memory, and deliver 1.5 million IOs per second, not to mention bandwidth of 2.5 GB per second and an ultra-low access latency of 30-60 microseconds. This should ensure that any server equipped with one of these bad boys will get all the data transfer performance it could possibly need.

According to Texas Memory Systems, the RamSan-70’s real claim to fame, however, is the inclusion of a firmware which allows a server to boot directly from the SSD, foregoing the need for legacy hard drives and the like. I know consumer PCIe SSDs have had this capability for quite some time now, but it seems that server products have been left out in the cold up until now. It’s hard to say exactly why server variants have omitted what appears to be a pretty obvious feature, though it may have something do with the fact that most server motherboards have relied on a UEFI firmware for quite some time now, and this may present more implementation obstacles than a legacy bios interface. This is, of course, only a guess, but considering the lack of any other reasonable explanation, I think it’s probably pretty accurate. 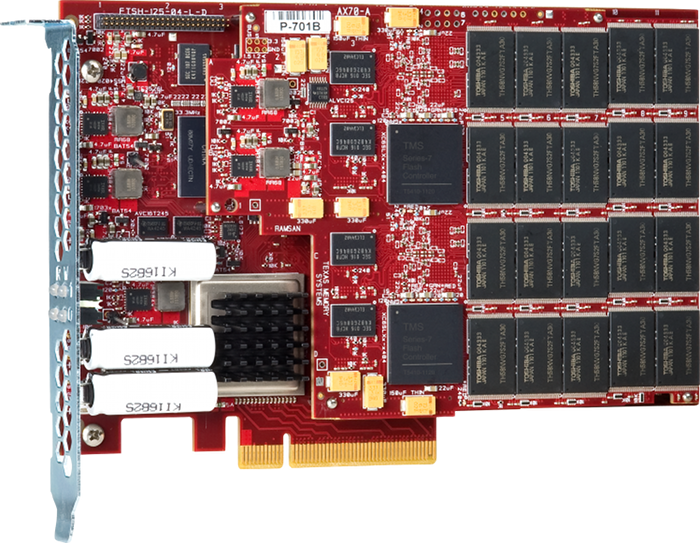 Another positive aspect of this new product is the inclusion of SLC flash memory, which is known to be considerably more durable (and expensive) than their more common MLC counterparts. This is due to the fact that SLC stores only 1 bit per cell whereas MLC stores 2. This, of course, means MLC makes more efficient use of available die area and is subsequently cheaper, but at the same time, this kind of cell sharing also has the unfortunate side effect that the oxide layer separating the floating gate from the silicon substrate wears out more quickly due to the increased exposure to the intense voltage needed to write data to the cell. This precarious balancing act also means that MLC isn’t quite as reliable as its single cell brethren when it comes to external factors such as temperature, as two charges per cell aren’t quite as stable as a single one. Indeed, it’s SLC’s endurance and enhanced environmental resilience that make it the preferred solution for industrial and mission critical applications.

Also, I’ve alluded to this before, but it seems there may be something of a niche consumer market for SSDs utilizing SLC memory. This probably isn’t simply due to SLCs inherent advantages (of which there are many) over MLC, but also due to the fact that products targeted toward a more professional crowd have been through far more rigorous qualification than the vast majority of consumer drives, providing a greater guarantee of reliability in the long term. Of course, all these niceties come with a nice price tag as well, so only those with a huge hole burning through their pocket need apply.

Overall, it seems Texas Memory Systems may have a real winner on their hands. With extreme performance and now a bootable firmware to boot, there’s really no reason why the RamSan-70 shouldn’t be a runaway success. Oh, and don’t forget the 900GB capacity, further cementing the notion that everything really is bigger in Texas. : )

Press Release On Next Page.