Our first one-on-one meeting of CES 2016 was with Robert Fan, head of marketing for Silicon Motion. We met with Robert last year also, so it is good to see familiar faces and establish long-term relationships. Robert was very gracious in sharing Silicon Motion’s SSD controller “roadmap” for the near future. 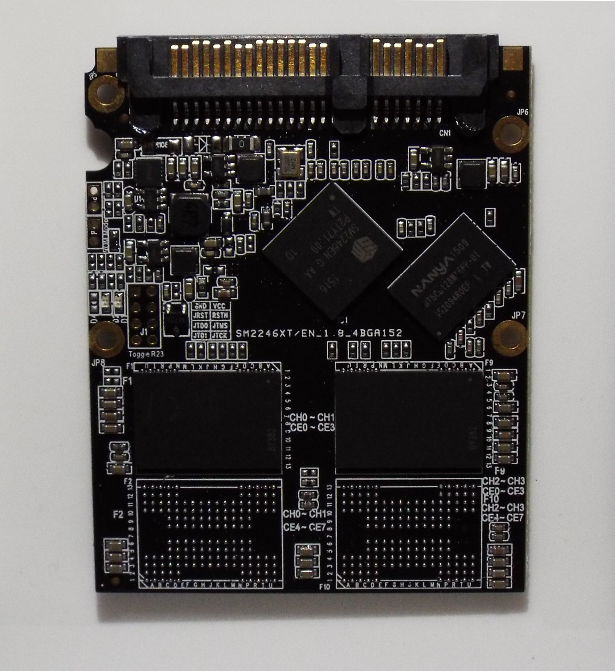 Here is a close-up of the Intel PCB featuring the SM2246EN controller.

This next display shows a number of different SSD manufacturers that utilize the widely-adopted SM2256 controller that is compatible with TLC NAND. Utilizing TLC NAND allows for producing SSDs at very aggressive and competitive price points. 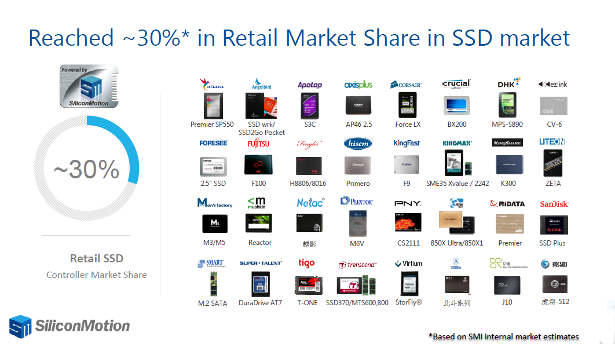 As the above screenshot shows, Silicon Motion has grown to achieve nearly 30% (and growing) of retail market share for SSD controllers. Please see our previous article announcing the SM2246EN’s 3D NAND compatibility.

As you can see in the “roadmap” screenshot above, Silicon Motion has currently under development two additional SSD controllers. The SM2258 is shown as a SATA 6Gb/s controller that will be compatible with 3D TLC NAND – this should lead to some very large capacity drives at extremely competitive price points.

As shown in the same screenshot, and the above image, Silicon Motion also has under development the SM2260, which will be a PCIe-based controller for both 2D and 3D NAND, in both MLC and TLC versions.

We would like to thank Robert Fan and his staff for meeting with us again this year.  Silicon Motion has enjoyed tremendous growth, and they have positioned themselves to continue this trend, with more and more OEMs turning to them for their SSD controller solutions.

Stay tuned for further SSD news as we being our travels through the massive show halls here at CES over the next three days.