This morning, SandForce officially releases their SF-2200 series processors to manufacturers which are capable of parallel transfer speeds of 500MB/s read and write.

It is hard to believe that SandForce only opened their doors just over a year ago and their impact has changed the way we are looking at solid state drives today.

Earlier this year, I made a statement that I believed SandForce to be in a position to equal those who have made such great impact on computer technology before them, most noteably Intel and Microsoft.

I will stand by that and after reading a bit of what we have to offer, you just may understand why.

For interests sake, lets do things a bit backwards.  we just completed a SSD review on the new OCZ Vertex 3 SSD which contains the SF 2200 series processor.  Only as a result of that SSD containing the SF-2200 processor was it able to surpass every solid state drive we had ever reviewed and all but one RAID 0 configuration.  Coincidence as it may be the only drive to to place above the Vertex 3 was the OCZ RevoDrive x2, the Revo containing 4x SF-1200 processors.  To clarify, the SSD blew away a RAID 0 configuration containing 4xCrucial C300 SSDs.

The chart below represents the best solid state drives we have reviewed at The SSD Review.  Its a great illustration to show, not only how SandForce has progressed since their first release in Q1 2010, but also what the SF 2200 processor is capable of.  Ten SandForce driven SSDs are amongst the top 14 SSDs we have tested. 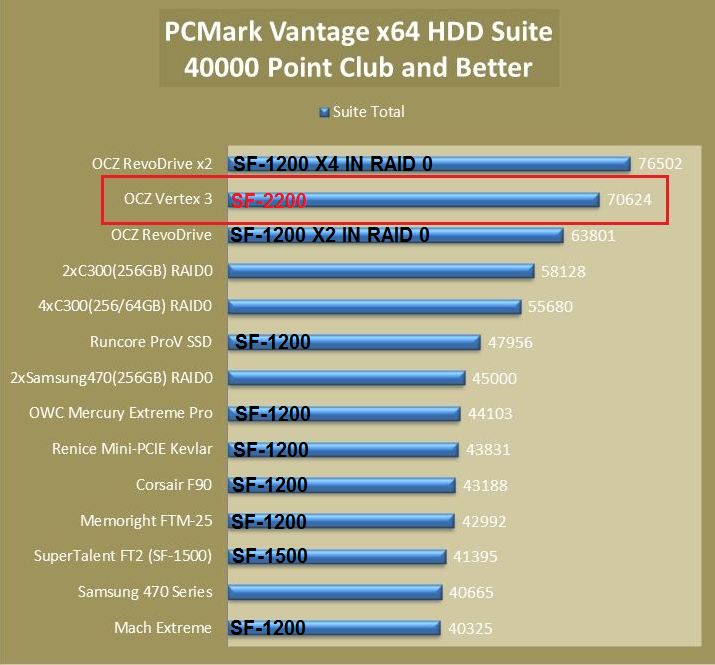 With this release, SandForce has brought 4 new processors to the fold, 2x SATA 2 and 2x SATA3 interface.

The SF-2141 and SF-2181 processors are both SATA II and their advertised performance is 250MB/s read and write but we know that will stretch as close to the SATA II bandwidth maximum as possible and probably get up to 275MB/s.  SandForce has boosted the 4kb random performance to 60, 000 which is going to be great news for those not quite ready for the jump to SATA 3 yet.

It was only a few months back that we started seeing any SSD come into the 40000 point area of PCMark Vantage and those SandForce drives seem to have all done it parallel to a firmware refresh or update to which their 4k IOPs performance was given a higher rating.  Although its hard to differentiate from one drive to another with many roadblocked at the max bandwidth, Vantage has been able to establish a new medium where 8 typical user activities are scored by the transfer speeds of the storage device.  The simulated tests are then scored and a suite score provided. An IOPS specification of 60,000 is double that of the SF-1200 and there will definitely be an improvement in performance.

Both processors are SATA 3 and capable of parallel performance of 500MB/s for read and write speeds.  Both are capable of a maximum 60,000 iops at 4k random write access. For the most part, both processors are very similar and capable of capacities up to 512GB, both now having 256bit AES encryption and having 8 flash channels with the only difference being that the SF-2282 has 16 byte lanes vice 8.

Of particular interest to many with respect to SSD capacity with the new SF-21/2200 series processors is that they can support “binary capacity points” (64/128/256GB).  There are no drives set up with this just yet but eventually SF based drives using these processors will not require any over provisioning whatsoever and the user will benefit from total NAND capacity as they do with most other brands of SSDs.

Up until this release, the theory of equal read and writes was thought to be an impossibility.  Simply, typical controllers today write the same amount to the flash as they read so its a given that it is going to take longer to write the data.  Although SandForce won’t give away the entire formula, this is based largely on their DuraWrite Technology where it is understood that the only way to write to the flash as fast as one can read is to write less to the flash.

SandForce has succeeded in maintaining a write amplification of less than 1 which provides benefit to SSD longevity as much as it does performance.  DuraWrites unique ability to write less to the flash means that it won’t wear out as quickly as that of other controllers leaving the logical conclusion that the same flash has to last longer.

pg 2 – BENCHMARKS AND SOME FINAL THOUGHTS